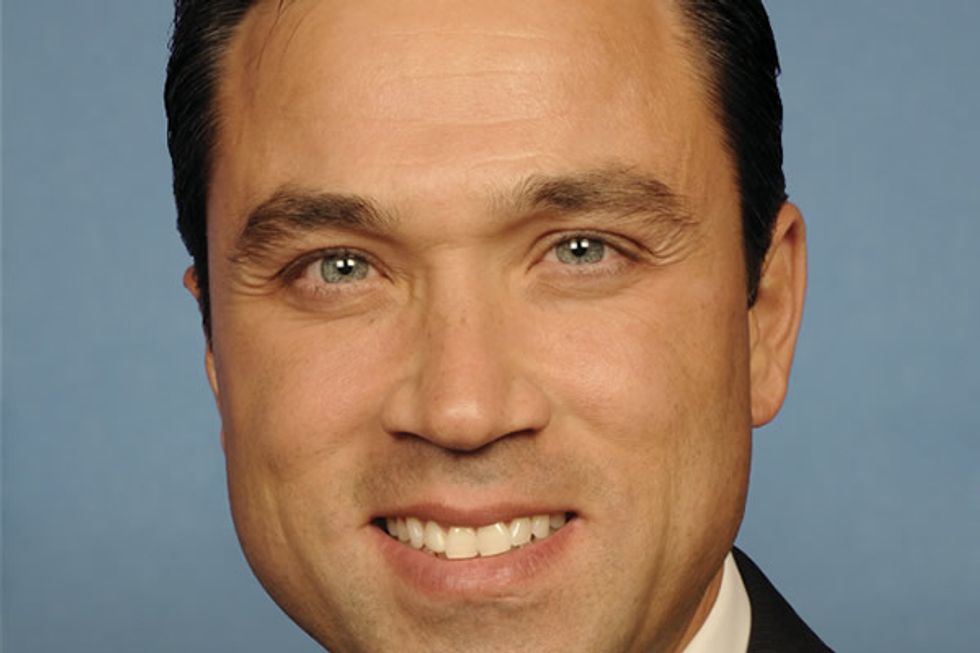 Rep. Michael Grimm (R-Naturally), a self-described "moral man, a man of integrity" -- who likes to threaten to throw journalists off balconies and break them in half, but in a moral way, we guess -- is expected to plead guilty to about eleventy hundred charges of tax evasion on Tuesday. (Or, OK, at least one charge, though he was indicted on 20 different counts of doing naughty illegal stuff.) [contextly_sidebar id="rTA7p8mJD2AQzEcl7goN6vLVAeAQLDaj"]

Let's wavy-lines flashback to the long ago days when he was still claiming, "Nuh uh, totes innocent" to these moral and full-of-integrity alleged crimes:

for the four years preceding his election to Congress in 2010, Grimm owned and ran an Upper East Side restaurant called Healthalicious, which he allegedly staffed with illegal immigrants he could allegedly pay under the table, which allegedly allowed him to underreport the amounts he was paying in wages, thus allegedly dodging large payroll tax bills to both the federal and state governments. (All uses of “allegedly” in the preceding sentence brought to you by Wonkette’s in-house legal counsel, an incontinent parrot we rescued before the homeless guy out in the alley could eat him.)

Later, when two former Healthalicious employees sued Grimm, alleging that he had paid them less than minimum wage, the congressman (allegedly!) lied under oath during a deposition about his payroll practices. He is also alleged to have hired two people to help him with this scheme while he was busy with his first run for Congress, and to have delivered his instructions on how much (or how little) cash to hand out to employees during pay periods via an AOL email account, which should be grounds for stoning on the National Mall on live television right there.

When Grimm was first indicted, he was pretty sure this was nothing more than a "witch hunt" -- probably because he was brave enough to stand up to Tyrant Obama for breaking the Constitution with a charge on cell phones to provide interwebs access in classrooms. [contextly_sidebar id="r5zd82EZazZZs1y4Wyd649jA0E984jxe"] Or maybe because of how we all laughed and laughed and laughed even harder some more at the "Democrat-led smear campaign" story of him doing some sex to a lady in a bar bathroom, not that there's anything wrong with that. [contextly_sidebar id="uTuyq5RPDj4N4fMMEF4Sj8r4tmFLhBDR"]

Apparently, what had started out as an obvious Democrat witch hunt smear campaign McCarthyism outright LIE against Grimm has turned into some pretty compelling evidence. Compelling enough that Grimm is changing his plea from "not guilty" to "OK, you got me, please don't send me to prison for the full two decades I could totally get."

Naturally, Democrats are trying to politicize the situation by suggesting that Grimm should maybe resign from the House of Representatives -- and if he won't, his boss Speaker John Boehner should MAKE HIM DO IT -- if he is going to plead guilty. The rules say he cannot be a member of Congress while sitting in prison for a while, which wouldn't really impede his ability to do nothing in Congress, but could still look sort of bad anyway. But if he doesn't get actual jail time, there's nothing that says he can't continue to represent his district of Staten Island. Nothing except for maybe morals. And integrity.