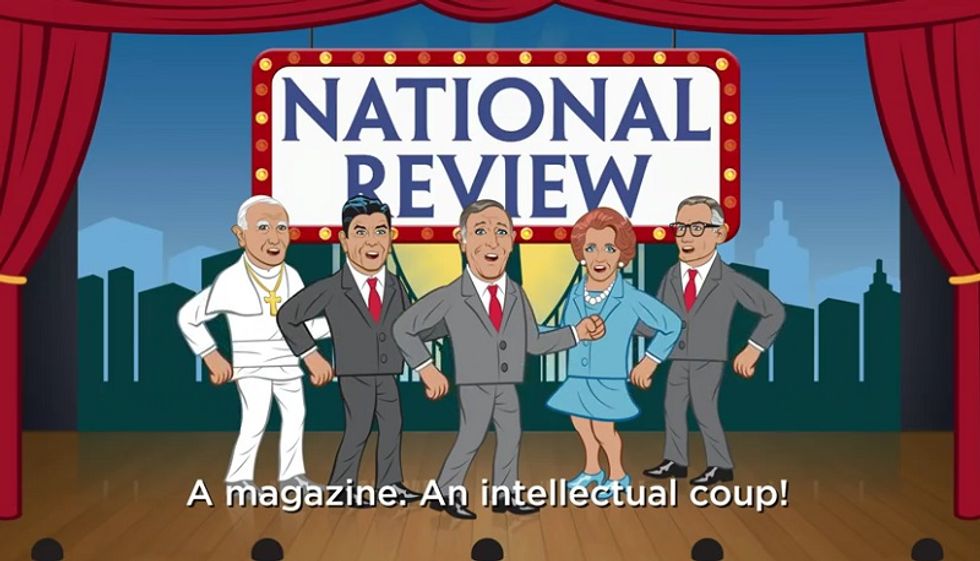 For reasons beyond the human ken, the National Review thought a great way to celebrate its 60th anniversary was with this video: an animated all-singing, all-dancing history of the modern conservative movement, at least from the moment that William F. Buckley decided that he would make a magazine.

You know a "song" is going to be excruciating when the very first lines are: "It was 1955, bad ideologies were alive / and the administrative state grew unabated." Something like that makes you long for the unadorned simplicity and verve of the lyrics to "Sugar, Sugar" by The Archies.

Somehow, the song begins to make even less sense -- "Friends of freedom were all scattered / Couldn't focus on what mattered" -- and we see these friends of freedom in portraits: Cato, Adam Smith, Edmund Burke, Milton Friedman, Ludwig von Mises, and Russel Kirk (Who?). No wonder they were scattered. Half of them had been dead for centuries, which will play hell with your focus. Happily, Buckley stood athwart history (and the civil rights movement) yelling "Stop!" and the National Review burst wholly formed out of Buckley's forehead.

They almost got the sneer right

Then Buckley and Barry Goldwater had a baby named Ronald Reagan, and badly animated caricatures of conservative heroes saved the world from campus radicals and civil rights. And somehow Pope John Paul II is in there, although he never wrote for the magazine beyond an anonymous short-lived sex advice column where every word was "No."

You can almost hear the dinner guests who attended the "film's" premiere, at the 2015 William F. Buckley Jr. Prize Dinner in Dallas last month, guffawing at this HILARIOUS jab at the Clintons:

They are sad losers who never won once against the mighty engine of American Conservatism.

There's the expected whining about liberals who have taken over academe, and the blind fools who worship Obama. Yes, that is still something conservatives think liberals do. In the last big stick-figure dance scene, the Worthies of the ages are joined by current editor Rich Lowry, another moment that must have generated whoops as the drunken dinner guests realized who that was in the funny cartoon. And then, thank god, it's over.

Shit...It's that dream where all the sex dolls come alive and start dancing.

But we can't help but noticing something missing. While the song briefly mentions William F. Buckley's heroic rejection of the John Birch Society, there's not a single word about Buckley's 1957 essay arguing that Southern white power must prevail in the civil rights struggles of the day, "because for the time being, it is the advanced race." After all, the Great Founder reasoned, "it is more important for any community, anywhere in the world, to affirm and live by civilized standards, than to bow to the demands of the numerical majority." And as far as he could tell, the negro was not anywhere near ready for self-government. We bet they could have come up with some awesome rhymes for those ideas if they'd only tried.

[contextly_sidebar id="8mOMbxNHQBUJmoM7Nc36exLqpIBGBo9C"]Worse, the tribute leaves out the golden achievements of the National Review Online: nothing about Kathryn Jean Lopez's deep confusion about why people think S-E-X is such a big deal, much less the fainting spell provoked by the New Yorker's gay Bert and Ernie cover.

[contextly_sidebar id="oGdaQACYuDFxY4LLlIYuCwI5iKs5fuLj"]How could they leave out Kevin Williamson's triumphant tale of surviving a scary encounter with an urban black child who mocked him and called him a "white devil"? We believe that Williamson believes it happened. Or NRO's perfectly calm reaction to the news that black preschoolers get suspended -- from preschool! -- at far greater rates than white preschoolers in a place where nobody should ever be suspended. No surprise, really, because everybody knows black families are simply dysfunctional, so why the fuss?

[contextly_sidebar id="F7OyL9APeUR5INe57pxm8tMXLO6XXcrZ"]There wasn't even the slightest hint of a nod to the immortal 2012 column in which Kevin Williamson predicted women would vote in droves for Romney, because they simply adore a rich man who makes them feel like they could marry well, too. How could they ignore the classics?

Ah well. The cartoon did at lest get in the traditional slam against universities that are simply crawling with actual communists, so at least the online crew got one hat-tip. But would it have killed the animators to have included a mention of NRO's touching 2014 tribute to Maya Angelou, who they memorialized not as a writer or educator, but as a "proud gun owner and user." That's one of those intellectual coups the song was all about.