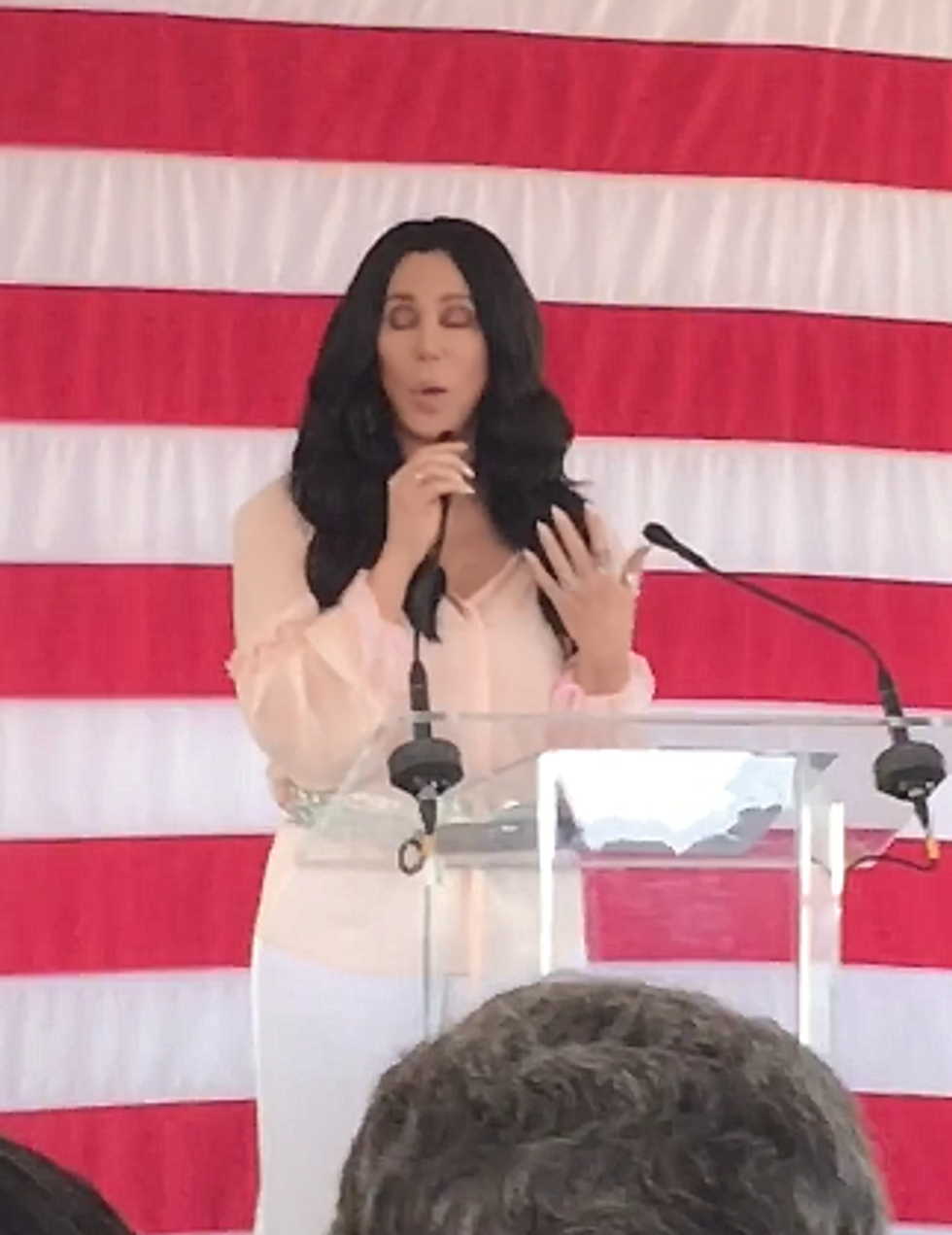 If I could turn back tiiiiiiiiiime, If I could find a wayyyyyyy

How about something nice to distract you from the never-ending spectacle of Donald Trump failing his way toward November 8? There was some kind of foo foo gay fundraiser for Hillary Clinton in Provincetown, Massachusetts, where the foo foo gays go to foo foo gay all over each other. And you know who was there? It was Cher! The very nice gay website Towleroad has been posting videos from the event this morning on Facebook, because its CEO Michael Goff was there! We thought you might like to end your day watching them. Because we are service-y, we will watch the best ones and tell you what is in them, and then send you over to Towleroad's Facebook to watch the rest if that's what you really want to do, we don't care.

In this first one, Cher tells the story of working on Hillary's Senate campaign, and asking her why her warmth and funniness didn't come through when she was doing public speaking. Cher is like OOPS I hope she doesn't mind me telling this story, and adds, "TOO LATE NOW!" Everybody laughs and laughs, and Cher says Hillary's answer was that she sort of pulled back after the GOP decided to slice her open back at the beginning of Bill's first term, just for trying to pass healthcare. All the gays are gaying too loudly toward the end, but we're pretty sure Cher says, "This chick is just tougher than water torture."

In this video, Cher quotes Donald Trump's pal Donny Deutsch saying Donald Trump doesn't actually want to be president, but rather "He wants the crowds. He wants the adulation. He doesn't give a shit about the work." We like it when stump speeches have dirty cusses, yes we do! She also says watching Trump speak with a teleprompter is like watching "Racist Fun With Dick And Jane." LOL!

Here's another one. We won't spoiler this one any for you, because all these videos are short and you are capable of watching them all by yourself, SO THERE. (Semi-spoiler: It involves a very campy joke about who else Trump reminds Cher of.)

Oh, here is something different! It is Hillary and Cher together singing "I Got You Babe"! Just kidding, but it is Hillary saying how awesome Cher is, and noting to the young-ish gay crowd that GURL, she has been listening to Cher since you queens were in diapers, so STEP OFF.

YAY! Weren't those nice videos? Are you going to go listen to "If I Could Turn Back Time" on repeat now? YES YOU ARE. Or we are. Or maybe we both are. There are a couple more on the Towleroad Facebook that we deemed not as exciting, but if you wanna see them, click the link at the end of this post.

Anyway, don't you guys think Hillary should nominate Cher to be her Secretary Of Shit-Talking? We think it would be great. MAKE IT HAPPEN, HILLZ.