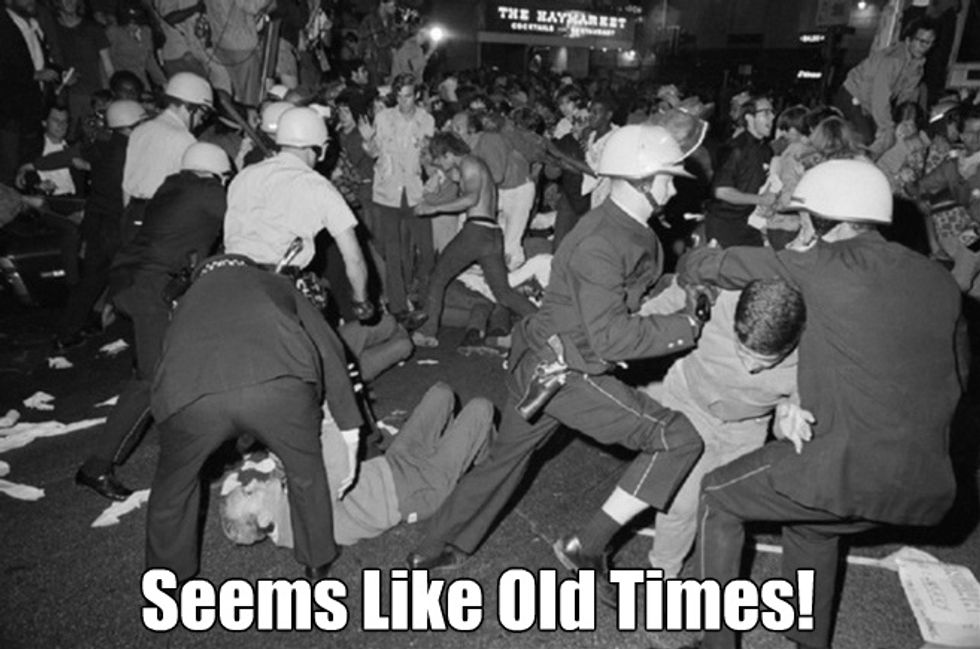 If you thought that police departments arming themselves with military assault rifles, cruising around in surplus MRAPs, and firing tear gas all willy nilly at protestors was maybe a problem, you'll really love this report from The Guardian, part of reporter Spencer Ackerman's series on Chicago police abuses. Turns out that for years, Chicago police have routinely "disappeared" arrestees and interrogated them for periods of 12 to 24 hours before booking them, reading them their rights, or allowing them to see an attorney. Essentially, the Chicago Police Department has its very own version of a "Black Site," a place to soften people up a little in custody before the official paper trail begins:

The facility, a nondescript warehouse on Chicago’s west side known as Homan Square, has long been the scene of secretive work by special police units. Interviews with local attorneys and one protester who spent the better part of a day shackled in Homan Square describe operations that deny access to basic constitutional rights.

Alleged police practices at Homan Square, according to those familiar with the facility who spoke out to the Guardian after its investigation into Chicago police abuse, include:

At least one man was found unresponsive in a Homan Square “interview room” and later pronounced dead.

Unlike the CIA's black sites, the Chicago PD's version doesn't even have the decency to be hidden away in some foreign country whose government we're friendly with and where the Constitution doesn't apply. Then again, it is Chicago, so close enough. Homan Square appears to exist in a carefully managed Kafkaesque space where the Chicago PD simply pretends people aren't entitled to normal legal procedure:

Unlike a precinct, no one taken to Homan Square is said to be booked. Witnesses, suspects or other Chicagoans who end up inside do not appear to have a public, searchable record entered into a database indicating where they are, as happens when someone is booked at a precinct. Lawyers and relatives insist there is no way of finding their whereabouts. Those lawyers who have attempted to gain access to Homan Square are most often turned away, even as their clients remain in custody inside.

“It’s sort of an open secret among attorneys that regularly make police station visits, this place – if you can’t find a client in the system, odds are they’re there,” said Chicago lawyer Julia Bartmes.

Needless to say, the Chicago Police Department, after refusing to answer detailed questions sent by Ackerman, issued what sounds like a categorical denial after the piece first ran on Tuesday:

“CPD [Chicago police department] abides by all laws, rules and guidelines pertaining to any interviews of suspects or witnesses, at Homan Square or any other CPD facility. If lawyers have a client detained at Homan Square, just like any other facility, they are allowed to speak to and visit them. It also houses CPD’s Evidence Recovered Property Section, where the public is able to claim inventoried property,” the statement said, something numerous attorneys and one Homan Square arrestee have denied.

“There are always records of anyone who is arrested by CPD, and this is not any different at Homan Square,” it continued.

Ackerman notes a few artful holes in the denial, however: It doesn't actually say "how long into an arrest or detention those records are generated or their availability to the public." Or when attorneys finally get to see their clients. But hey, what's a few hours of interrogation without a Miranda warning or access to a lawyer? The CPD has serious crimes to solve!

On Tuesday's All In, Chris Hayes asked Ackerman the obvious question: If this has been going on for years, then why on Earth haven't any of the Chicago papers Done Journalism on it?

Ackerman: I wish you could tell me that! ... What I've heard from lawyers and activists is that they've tried to interest journalists in looking into Homan Square for years, and got no takers.

The problem, said Ackerman, is that it's simply very "difficult to get institutional Chicago interested in things that happen to poor Chicagoans, brown Chicagoans, and black Chicagoans." In Chicago? We find that awfully difficult to believe! Actually, we find it a little harder to believe that a major Chicago paper wouldn't have jumped at what seems like obvious Pulitzer bait. Let's hope we find out more about how the hell the local press missed it. And in the meantime, the earthly shade of Mike Royko has got to be one pissed-off ghost.

Look, go read the whole thing. We'll be here when you get back. You won't believe this is happening -- or more likely, you'll believe it entirely too easily. After all, this is the city where Mayor Richard J. Daley proclaimed, "The police are not here to create disorder, they're here to preserve disorder."