Child Murderer George Zimmerman Has Thoughts On Parenting. They Are Ugly Thoughts 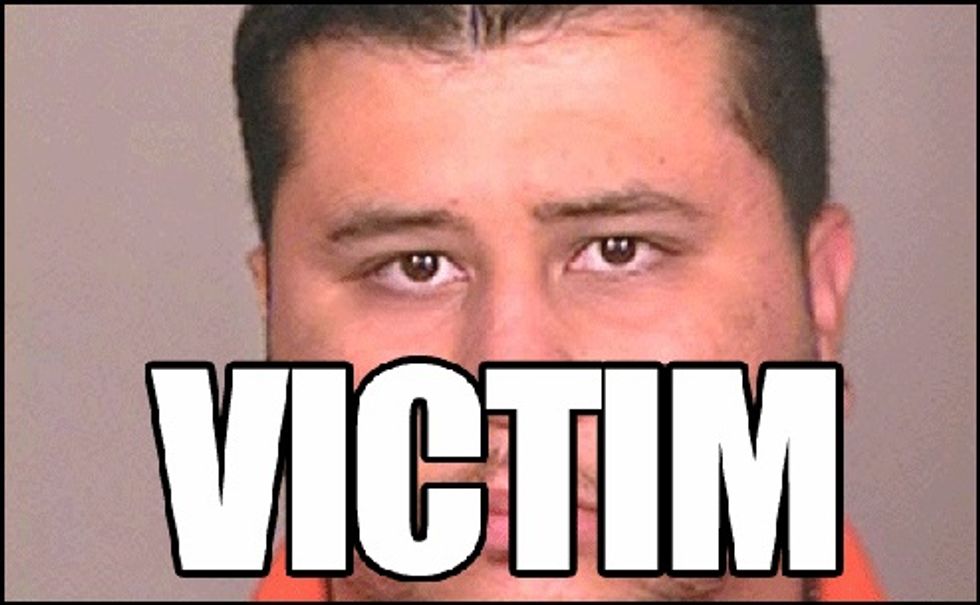 Oh, It's This Asshole Again

As a dog returns to its vomit, Second Amendment hero George Zimmerman returns to the news cycle, this time in an interview with the Daily Beast, in which the acquitted killer of Trayvon Martin shared his important thoughts about the parenting skills of Sybrina Fulton and Tracy Martin, the parents of the unarmed teen he gunned down in 2012. As with everything else in his life, like his multiple arrests (and no convictions) for domestic violence or his inability to keep a job, Zimmerman explained that other people are responsible for what he did.

“They didn’t raise their son right. He attacked a complete stranger and attempted to kill him,” Zimmerman said of Martin.

“Sybrina Fulton and Tracy Martin did everything they could to capitalize on her son’s death,” he said. “She was never a mother figure to him. Tracy Martin couldn’t have cared less about their son. He treated him like a dog without a leash.”

Remarkably, the Daily Beast's Gideon Resnick does not appear to have asked the child killer what horrific parenting mistakes may have led to Zimmerman's own deep narcissism, pathological denial of responsibility, and needy publicity-seeking.

We also learn that Zimmerman appears to have finally sold the handgun he used to kill the 17-year-old for $138,900, in an auction plagued by cancellations, server crashes, and trolling.

“It is what was used to save my life from a near-death brutal attack by Trayvon Martin,” Zimmerman said of the gun. “If it was a stick or mace, it’s the one tool I had that prevented Trayvon from killing me.”

Resnick notes that when police arrived on the scene, Zimmerman was "not anywhere near close to death," although he did have lacerations on the back of his head and a bloody nose. In addition to being found not guilty at trial, Zimmerman became a hero to gun humpers and online racists for his brave killing of a teen armed with a sidewalk.

Resnick reports that when he asked Zimmerman if he considered how Martin's family might feel about his profiting from the sale of the weapon that killed their son, he immediately called them bad parents who were among many others who'd wrecked George Zimmerman's life:

“If I have to live my life and if I have to go about my business as a normal person, then I would do that. However, I’m not afforded that luxury anymore,” he said. “You guys. The media. The masses. The Fulton-Martin family. They took that from me.”

Yes, a bit of reflection and self-awareness would no doubt do wonders for all those who have victimized George Zimmerman. We'll assume Zimmerman also regrets Fulton and Martin weren't available at the interview so he could stab them and rub salt into their open wounds.

Zimmerman wouldn't confirm the exact amount the murder weapon sold for, but did say "One of the firmest offers I have with verified assets is $100,000." He also spun out what appears to be a purely hypothetical fantasy about how he will at some point help police and other victims of Black Lives Matter:

They would know that George Zimmerman is going to step in and make them richer than they ever dreamed of being,” he valiantly claimed.

“I would take that money and I would make sure that every law enforcement officer and every single civilian who is affected by the Black Lives Matter fraudulent, violent campaign — those officers, those civilians, their entire families — were made wealthy beyond their wildest imaginations,” he said.

Presumably, this will all come to pass after he shoots and kills a magical fish that grants him three wishes.

Yr Friendly Neighborhood Comments Moderator would like to remind commenters that while George Zimmerman is a loathsome excuse for a human being, the Rules for Commenting Radicals remain in effect. No wishes for death or violence, please. You may, however, invent purely fictitious fates for Mr. Zimmerman were he banished to an episode of The Twilight Zone -- but no murder/torture fantasies there, either. Ask yourself "What Would Rod Serling Do?"