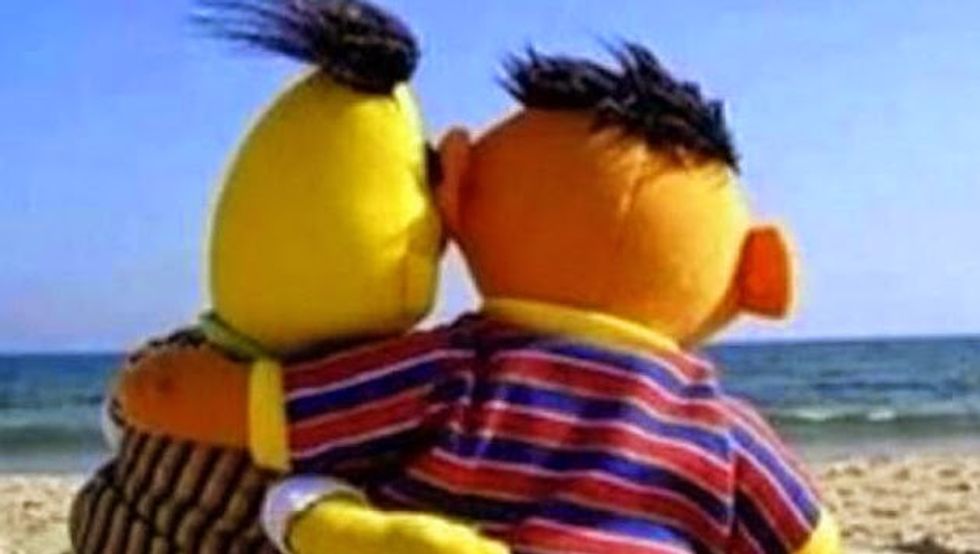 As you might imagine, the American Family Association was not at all happy about President Obama taking the month of June and giving it to the gays last week. So they made a video! A video in which AFA President Tim Wildmon, executive vice president Ed Vitagliano and public policy analyst Abe Hamilton hang out around the AFA break room and share their thoughts on the matter.

And boy did they have some!

That is actually a very easy question to answer! You can't fire someone for their religion, generally speaking! You can, however, fire them for their beliefs when their beliefs interfere with the the job they are supposed to be doing! So, for instance, if your job is to sell widgets and you will only sell widgets to some of the people, you are not doing your job. And you can be fired for not doing your job! You can also be fired for making it really easy for people to file a lawsuit against you. If I were a manager of a widget factory, and I went around publicly saying on social media that I believed that Christians should not have any rights, the owners of that factory might reasonably believe that I would not treat Christians fairly and thus would not be a very good manager. If I were to represent my company poorly on social media otherwise, say, by demanding that Ed Vitagliano not have sex ever, I could also be considered a liability. And possibly not a very stable human.

Speaking of which! Tom Wildmon's big problem with the proclamation was that it cited the need for more HIV/AIDS funding, when he would have much preferred for President Obama to just demand that gay people stop having sex!

“You know, one of the real ironies of this proclamation is the president here cites the need for more funding for HIV/AIDS,” Wildmon said. “But, unlike Michelle Obama, who advocates that children stay off the sodas, he doesn’t advocate behavior change when it comes to homosexual behavior affecting your health. Abe, why doesn’t he say, ‘Stop doing what you’re doing and you won’t get AIDS’?”

“I think once again you highlight one of the glaring episodes of hypocrisy that comes from secular progressivism as applied to public policy,” Hamilton responded. “In terms of other health areas, well, you need to get exercise, you need to cut the sugars, you need to not eat sodas, but in terms of homosexuality, there’s no adjustment needed in your behavior, we just need to pour more money into treating the results of the behavior.”

“Even though it’s very provable that engaging in homosexual activity is dangerous to your health, in the same way that smoking is, or sugar, too much sugar, or anything of that nature,” Wildmon added.

SEE, GAYS. They are just concerned about your health. This is a purely health-related concern, from some very health conscious dudes. Who are pretty sure that if you would just commit to either a lifetime of celibacy or a lifetime of unsatisfying sex with someone you couldn't possibly be attracted to, everything would be better for everyone. Heck, if the wives of the dudes who run the American Family Association can make that kind of sacrifice, then why can't you? FOR AMERICA.