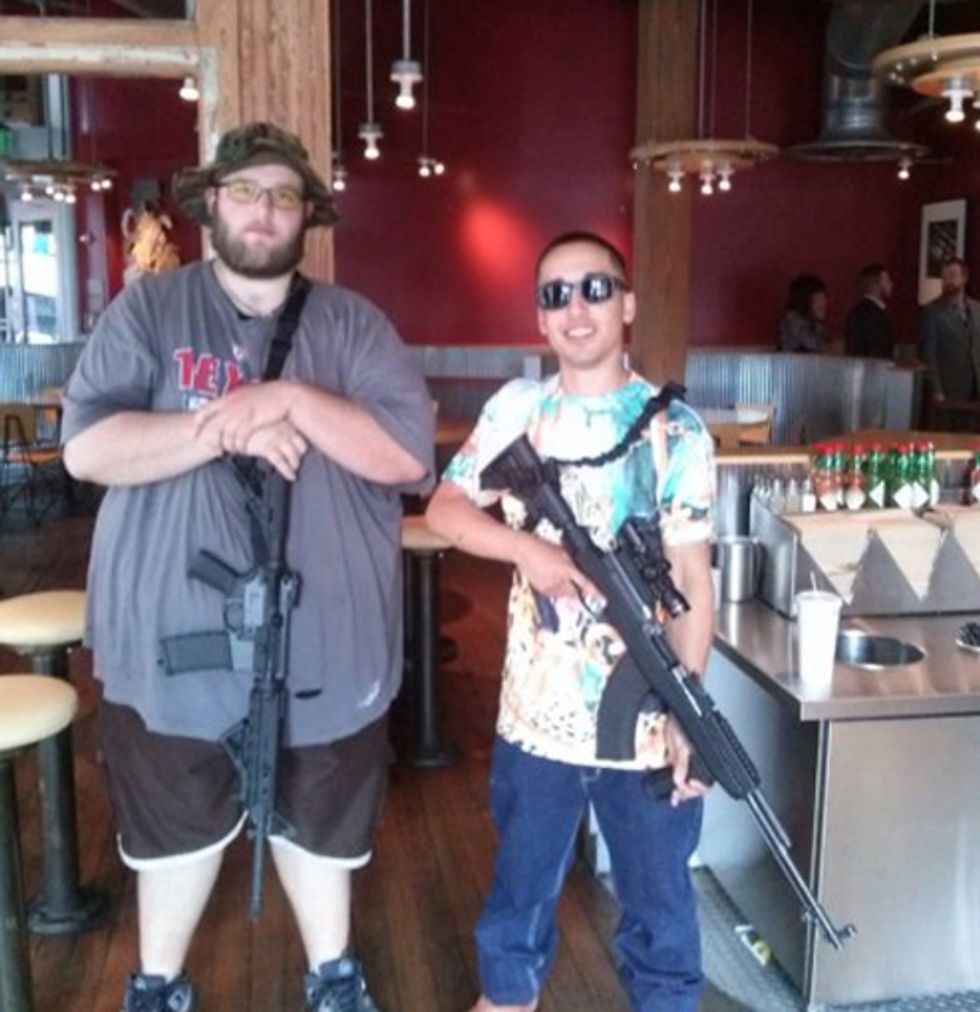 Oh, golly, folks, looks like another gun-grabbing freedom-hating libertysquisher corporation is trying to Take Away Our Right To Self Protection! After a group of those cheerful souls from Open Carry Tarrant County -- the same charmers thatscared the living bejesus out of some Jack In the Box workers a while back -- made a big show of taking their semiautomatic rifles to lunch at a Dallas Chipotle on Saturday, the company issued a statement Monday asking customers to please leave their guns at home. Needless to say, #BoycottChipotle is now a thing.

The statement by Chipotle attempted to be as bland and even-handed as possible, acknowledging that the "issue of gun ownership or gun rights has become one of the most contentious debates in the country," and insisting that what they'd rather focus on is "our mission to change the way people think about and eat fast food." That's definitely an easier mission than protecting America from tyranny, but tough luck, guys, you're in it now. The statement continues:

Recently participants from an “open carry” demonstration in Texas brought guns (including military-style assault rifles) into one of our restaurants, causing many of our customers anxiety and discomfort. Because of this, we are respectfully asking that customers not bring guns into our restaurants, unless they are authorized law enforcement personnel.

Historically, we felt it enough to simply comply with local laws regarding the open or concealed carrying of firearms, because we believe that it is not fair to put our team members in the uncomfortable position of asking that customers refrain from bringing guns into our restaurants. However, because the display of firearms in our restaurants has now created an environment that is potentially intimidating or uncomfortable for many of our customers, we think it is time to make this request.

Well, that seems pretty polite! But aren't you just becoming tyrants yourself, Chipotle? And really, what business of other people is it whether gun fondlers fondle their guns in public, where it is PERFECTLY LEGAL??? Isn't it really your duty to tell weaklings and pussies to man up and stop fearing guns? Do you even like America at all?

We do have to feel a bit of sadness for the plea in the final paragraphs, buried in all the corporate-speak:

The vast majority of gun owners are responsible citizens and we appreciate them honoring this request. And we hope that our customers who oppose the carrying of guns in public agree with us that it is the role of elected officials and the legislative process to set policy in this area, not the role of businesses like Chipotle.

We always welcome the exchange of ideas and opinions: it is one of the many things that make our country such a special place. But this issue is not central to the operation of our business, and we do not feel that our restaurants should be used as a platform for either side of the debate.

Sucks to be you, Chipotle. The nice folks at Townhall and other barking mad conservative blogs are spreading the news that your attempt to simply sell big phallic burritos instead of becoming the latest culture war battlefield makes you nothing more than "spineless panderers to liberal leftists in their efforts to assuage the political tension in modern America." And now the poor fondlers will not feel safe eating at your restaurants.

And even though we think Chipotle made the right call, we still probably aren't going to reward them; instead, we're going to a nice mom n pop Mexican place. How's that for loyalty?

Follow Doktor Zoom on Twitter. Sure, he eats at chain restaurants. But he doesn't brag about it in public.