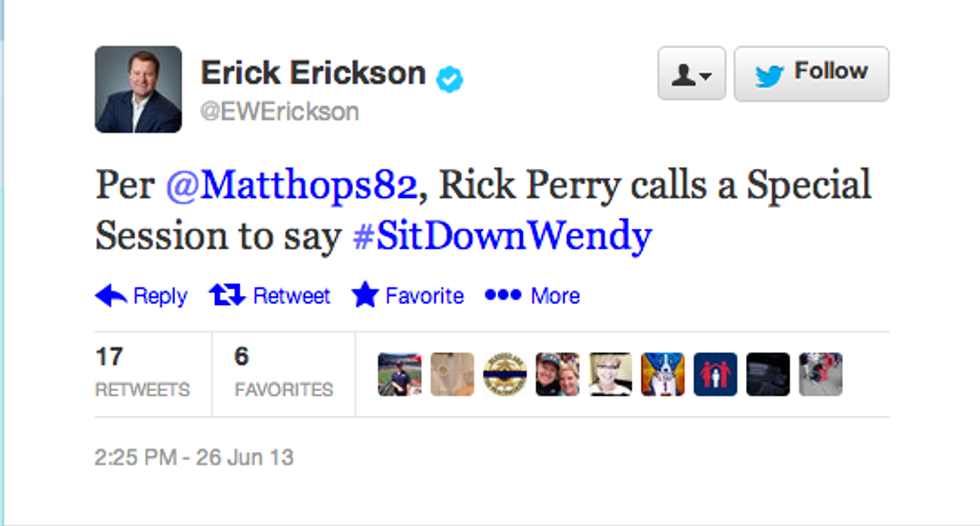 Erick Erickson, the very picture of a modern man of the 21st century, has done opened his fat gaping maw again, and said words with it. It went so well last time he had "thoughts" on the "ladies," that noted liberal Megyn Kelly ended up tying him to a Fox News studio chair and stuffing used tampons into his piggy little face before cutting off his ear, Reservoir-styley.

So how is Erickson helping with GOP outreach lately? By creating (we assume he created it? Well, it is not like we are going to check) the hilarious Tweeter number-sign "hashtag" "#sitdownwendy" to tell Texas state Sen. Wendy Davis to hush her mouth when the menfolk are talking. HAW HAW HAW, good one! Telling women to SHUT YOUR MOUTH AND KNOW YOUR ROLE! always works out so well for them.

Here, have some delightfulness!

It is par for the course, of course, for Erickson to tell womyn to shut their pieholes. It is just the way he do.

Dominance, dudes. It's what is for dinner. Because of how your wife won't be making any tonight. :(