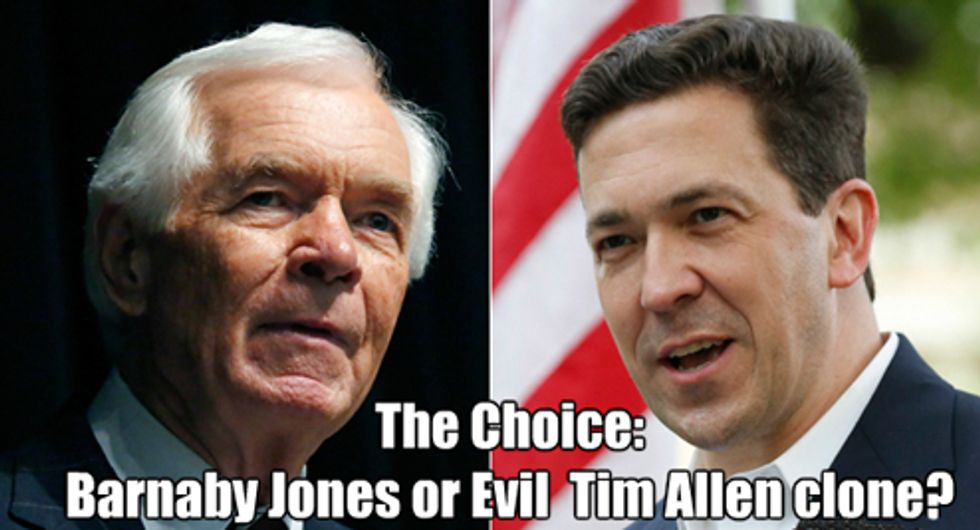 Mississippi sore loserman Chris McDaniel's team just KNOWS that the June 24 Senate primary vote wasrigged against him, and so it has been combing all the voting records to list every possible "irregular" vote and insisting they be tossed so that he can be the Republican nominee for Senate this fall, instead of doddering critterdiddler Thad Cochran. Among the votes that McDaniel wants tossed are those cast by McDaniel's own lawyer, Mitchell H. "Mitch" Tyner Sr., and his wife, Sloane Tyler. Those two obvious fraudsters are on a long list of sketchy votes in an affadavit submitted to Cochran's lawyers by McDaniel's legal team, which is headed by Mitchell H. "Mitch" Tyner Sr., the big fraud.

So yes, McDaniel's lawyer wants his own vote, and his wife's, thrown out as "irregular" because a McDaniel volunteer thought the voting records for Tyner and his wife looked funny. Explain this, please, Clarion-Ledger:

Tyner and his wife, Sloane Tyner, were flagged by a McDaniel volunteer as "CROSSOVER/IRREGULAR VOTING" in one of the new affidavits claiming problems with Madison County voting.

The affidavit says that with Tyner and his wife's votes, records showed "voted written in margin and on June 24." [...]

Others the McDaniel team has listed as being illegal or irregular votes in McDaniel's challenge include Secretary of State Delbert Hosemann and Cochran campaign spokesman Jordan Russell, both of whom claim their votes were not improper or irregular.

Dang, looks like the McDaniel team is right -- just about every vote was fraudulent, including those of longtime Republicans, so obviously he won!

A McDaniel spokesman said that the inclusion of the Tyners in the affidavit was simply proof that Mississippi voting records are such a mess that no one should consider them valid.

McDaniel's legal team expects to file a formal challenge of the primary election today; the deadline for a challenge is Thursday. Now we just have to wait and see whether the challenge gets thrown out since it was submitted by a lawyer who is a known voting fraudster.