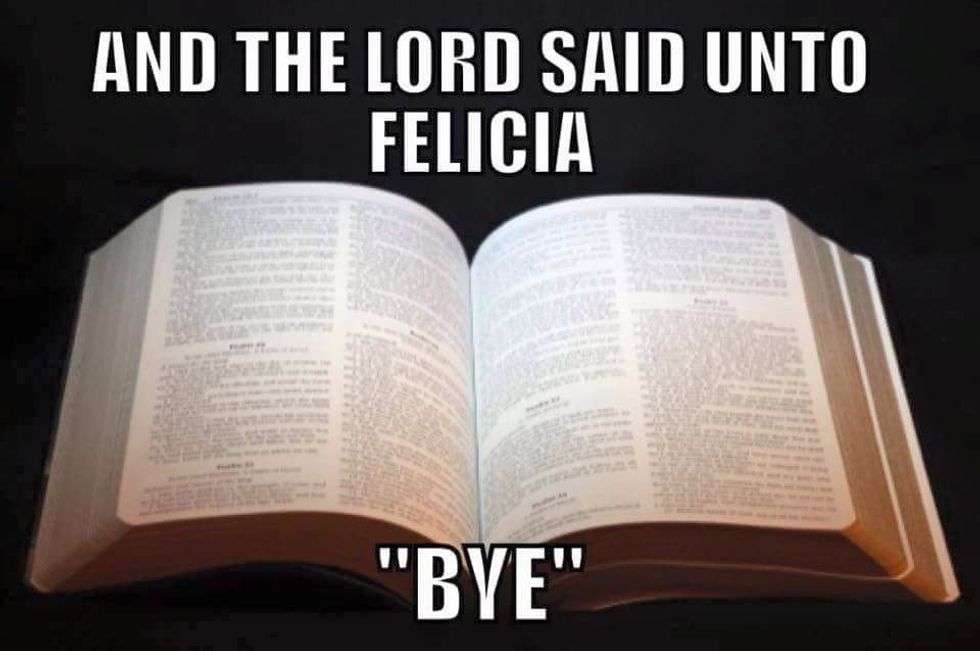 Except it's actually LARYCIA, and the Lord misspelled it.

Wheaton College near Chicago is a dumb, bad place. It's one of those institutions of higher learning everybody and their intelligent mothers would view as a Safety School, if a life of drug-addled panhandling doesn't work out, but for evangelicals, it's Big Shit. It's like real college, but instead of actual science, it teaches a bunch of fundamentalist Christian bullhonky about how Adam and Eve did evolution as a science project with God. That sorta stuff.

[contextly_sidebar id="c0JFP69SRH6VUhfThJOSw7dM6pEXBKqg"]Oh and one time the Supreme Court ruled Wheaton should get a hall pass from signing a goddamned form that says "girl parts drugs are the devil," which would get the school out of providing contraceptive care, because that form would allow girl parts-havers to get their girl parts drugs from third parties and THAT'S BAD. After all, the only IUD any woman could ever need is the King James Bible, rammed up in there all Christ-like, yeah?

So that sets the scene for this latest display of Onward Christian Assholes, directed toward tenured Wheaton poli sci professor Larycia Hawkins:

An Illinois evangelical college that suspended a tenured professor after she launched a Muslim solidarity campaign has moved to initiate termination proceedings. [...]

Arise Chicago's [a group advocating on Hawkins' behalf] statement alleges that Hawkins’ firing is directly related to a December announcement she made on Facebook, in which she vowed to wear a hijab throughout the Christmas season as a gesture of solidarity with Muslims. Hawkins wrote in the post that Muslims “worship the same God” as Christians.

But that's not right! The name of the Muslim God isn't even in American Christian English, so how could it be the same dude? QED, end of story, BYE LARYCIA!

OK, so obviously Professor Hawkins did a bad, by suggesting during the Christmas season that Muslims are human beings who come from the same ancient religious traditions as Christians do. Because it's just not the same, as Wheaton explained several weeks ago, upon suspending Hawkins:

"While Islam and Christianity are both monotheistic, we believe there are fundamental differences between the two faiths, including what they teach about God's revelation to humanity, the nature of God, the path to salvation and the life of prayer," Wheaton College said in a statement.

Well shoe horns and suck a penis, has Wheaton uncovered Breaking News in its "science labs" that two different religions are, Creation Science Fact, DIFFERENT FROM EACH OTHER? Somebody call the pope, this shit's gonna be HUGE.

Also different from Christians and Muslims: Those other "people of the book," Jewishes. But somehow we do not think that if Professor Hawkins had decided to say "OY VEY!" and do a lot of Jewish things as a Christmas mitzvah, in solidarity with Israeli settlers in the West Bank, for example, that Wheaton would be in the process of firing her ass. Just a guess!

Wait, hold the phone, our guess is wrong and these Muslim-hating fucks are also Jewishes-hating fucks?

According to Arise Chicago, [Wheaton Provost Stanton] Jones' notice stated that he sought Hawkins’ termination on the basis of an “unqualified assertion of religious solidarity with Muslims and Jews.”

[contextly_sidebar id="KKqo9GhKVR00JuD7sJCmtZHtRZ66PFlW"]What a fucking piece of syphilis-brained fuck. Now, Wheaton DID give Hawkins a chance to come back to work, as long as she gave up tenure for two years, probably because that would have made it easier to fire her in the meantime, just in case she was caught acting like Jesus toward untouchables again. Solidarity with the brown Islamics is a slippery slope to footwashing a bunch of gaywads, after all. (At Wheaton, they prefer to throw fruit at homosexuals and the students who love them.) In response, Hawkins told Wheaton to fuck off.

So now, she has to go before all the high priests and Sanhedrin or whatever, and if Wheaton is successful, she'll be out of a job. NOTE TO REAL SCHOOLS: A great teacher may soon be coming on the market!