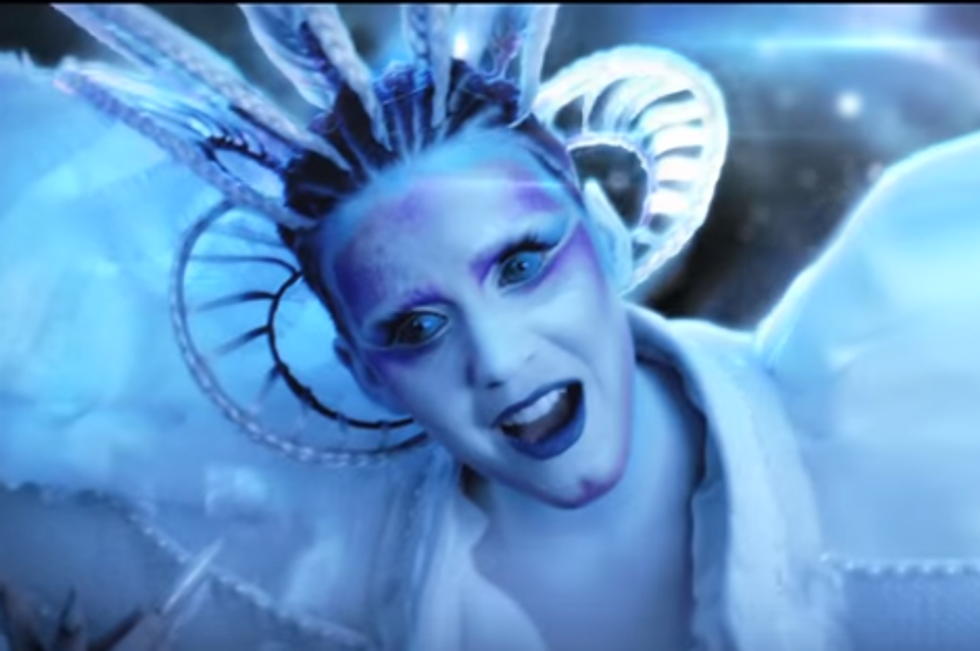 Don't look at this picture, it'll make you sex the Devil!

Wonkers, do you remember Christine Weick? She is a nice Christian lady who has this funny habit of losing her mind like a common Starbucks Red Cup protester at run-of-the-mill things, and she makes videos that go viral, as long as she prays to Jesus hard enough, FINGERS CROSSED! You might know her as the Crazy Monster Drink Lady, or the lady who sounded the alarm about the Muslim invasion of Oklahoma (peace be unto all those who were lost). Sometimes she gets a real bur up her ass about Muslims invading the National Cathedral in Washington. Oh, and the homosexuals. She's not a fan.

Well, she's back, and this time it's personal! Because Katy Perry, pop singer and current wife of Satan, has ruined Ms. Weick's relationship with her son, because of how Perry fucks demons in the music video for her song "E.T." So Weick got in her SUV (which she does NOT live in) and drove to a radio station in Phoenix where Perry's dad, Keith Hudson, was being interviewed, to give him a big slice of her bugfuck mind:

We can only imagine why her son does not speak to her.

In case you did not watch the video we kindly posted for you, here are some fun quotes, about why Katy Perry is the devil and it's her dad's fault:

Not to get too technical, but Katy Perry's dad is not the daughter of Katy Perry, unless she is a particularly AGELESS demon and her dad is really a lady. Anything is possible, though!

She says Mr. Hudson is bad at daddying, unlike how good of a mommy she is:

I have no relationship with my son because he is walking away from the Lord and he exploits it! ... I have tough love! My son is playin' in the road, and I discipline. You allow Katy Perry to play in the highway!

OK, according to the internet, Katy Perry is a grown-ass woman, but if she's indeed playing in the middle of the highway, somebody SHOULD at least tell her to move before she gets run the fuck over and Taylor Swift writes a song called "Bitch, You Just Died LOL." That would put some more Bad Blood in that feud, now wouldn't it?

Weick says Katy Perry is taking her own dad and Weick's son and millions of other people to hell. Hudson responds by asking, "You think you're acting like a Christian right now?"

Yes I am, because I am rebuking you! Because MY kid watches YOUR kid's videos, and it's sending him to hell because of the CHOICE HE MADE. Because of YOUR daughter, and your lack of discernment and direction. Shame on you! You're not a parent! You'll be held accountable for what you've done and allowed her to do.

All right. Yr Wonkette is going to go out on a limb here and guess, due to the phrase "the choice he made," that her son is PROBABLY GAY. Because we watched the video, and we doubt her son decided, "Oh, I will now do the premarital vagina sexing and also the weed-potting, because of this Katy Perry video!" And if so, the song didn't make him gay, lady, but maybe he's heard Perry's messages of warm welcome to her LGBT fans and it gives him a little respite from having an asshole mommy like you.

Here's the video if you want to watch, but beware, Katy Perry might subliminally convince you to do gay sex with demons, like she did to Christine's youngster:

Lest you think Christine is somehow embarrassed by this getting out there on the internet, she posted it on her Facebook (which is public, not that you'd want to go to there for any reason), saying, "I got angry today. REAL ANGRY!" You think she's mad, bro?

As we said, she REALLY wants attention, and since she's so certifiably cuckoo in her hoo-hoo, we guess we'll give it to her. It's refreshing to find a person who's truly RENAISSANCE crazy.

She also posted a thing on her Facebook recently about how U.F.O. sightings might be the Navy doing missile tests, or maybe it's demons playing in the sky. WHEEEEE, she's fun!