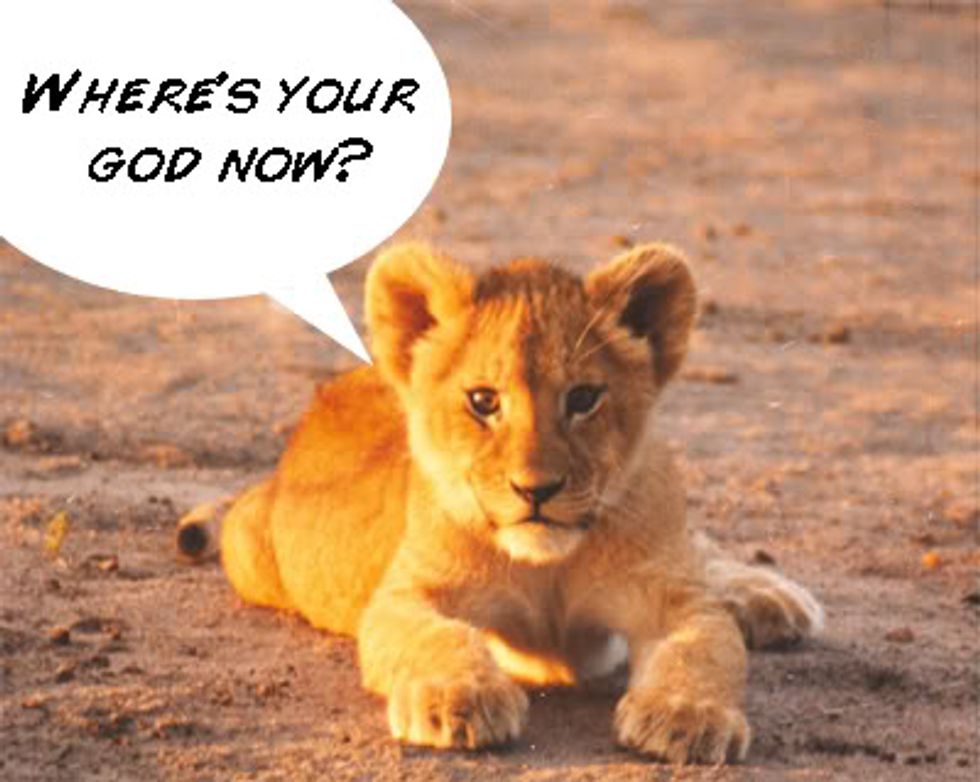 Oh no, are we saying there has been a literal attack in Illinois where a troupe of campy gay lions ate some innocent Christian innkeepers to death? No, but that would be quite a story! But you just know the religious right is about to kick its martyr complex into high gear over the latest episode of Sad Wingnut Christians Victimized By Cruel Gay Dictators:

A bed-and-breakfast near Paxton that turned down a same-sex couple's request to hold a civil-union ceremony there in 2011 has been ordered to pay $30,000 in damages to the couple and $50,000 to their attorneys and to stop violating the Illinois Human Rights Act. [...]

In September, [Judge Michael R.] Robinson ruled that Jim Walder violated the civil rights of [Todd and Mark Wathen] when he denied them the opportunity to hold their civil-union ceremony at the B&B he co-owns with his wife — the TimberCreek Bed-and-Breakfast west of Paxton.

Uh huh. And of course, this Walder character is real fuckin' Christlike, as it's reported he didn't simply say no to the Wathens. He decided to add his fucking $.02:

[A] few days later he sent an unsolicited email lecturing the Wathens about their "gay lifestyle," adding that "it's not too late to change your behavior."

He seems nice. Does the whiny pubewhistle of a human who owns the bed-and-breakfast actually respect the law? Haha, fuck no. Though the judge ordered the dude to pay ALL the moneys, and also to stop violating Illinois's Human Rights Act, it still says right there in the "weddings" section of his website that "We do not host civil union or gay marriage ceremonies and/or receptions." Surly, defiant little motherfucker.

Hey dude, IDEA: How about you just stop holding weddings, if you can't bring yourself to follow the goddamn law? How do you feel about that idea? You probably hate it. You probably wish your state would pass one of those Fuck The Gays bills like the one that passed in North Carolina (or the one that got vetoed THE FUCK out of in Georgia, haha) that gives raging twatnoggin conservative Christians like you a special pass to discriminate against people they don't like. Poor baby!

Hey dude, ANOTHER IDEA: Why don't you start a GoFundMe so you can turn your jizzy rage sobs into some CA$H? Except LOL, GoFundMe won't let people raise money anymore if they've been found in violation of the law like common thugs.

Hey dude, LAST IDEA: Go fuck yourself and follow the law, in that order, HOW ABOUT THAT IDEA?