Christian School Just Wants Black Girl's Hair To Be Less Black, What Is So Wrong With That? (Updated) 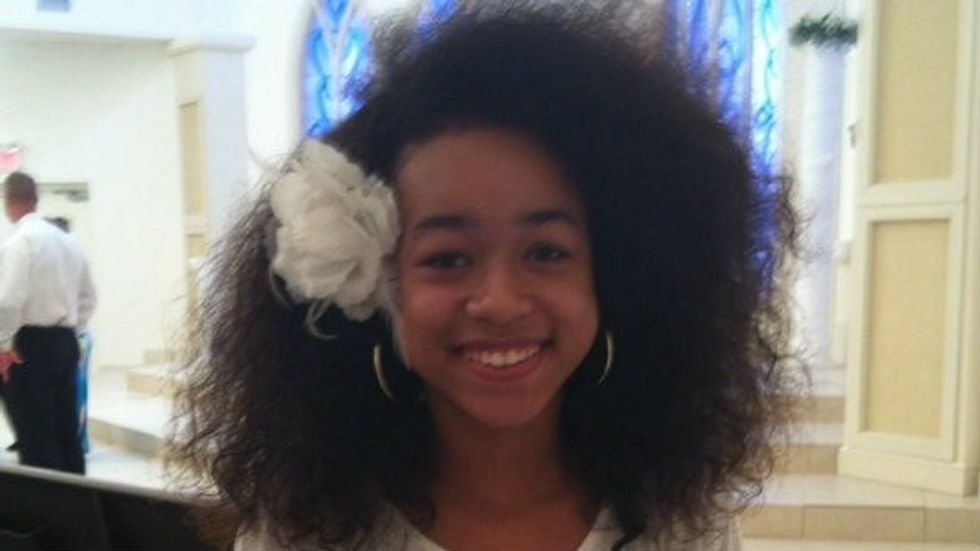 (Nice-Time Update! See end of post) Will you just look at that smiling discipline problem right there? The adorable miscreant is Vanessa VanDyke, a student at Faith Christian Academy in Orlando, whose parents asked the school to intervene after other students started teasing her about her big gorgeous hair. So the school administrators took quick action: They told Vanessa and her parents that she was in violation of the dress code, which says

"Hair must be a natural color and must not be a distraction," and goes on to state examples that include, but are not limited to, mohawks, shaved designs and rat tails.

You want to not get teased? Stop being such a distracting individual with your wild radical hair, which could incite revolution or something. Also, we've seen enough anime to know that she could probably be concealing a garrote or something up in there, god knows.

Vanessa is justifiably proud of her impressive head of hair, but not delighted about the basic reaction of all middle-schoolers to anything that is slightly different from anyone else:

"It says that I'm unique," said VanDyke. "First of all, it's puffy and I like it that way. I know people will tease me about it because it's not straight. I don't fit in."

She's been wearing her hair big and natural throughout the school year, but the administration only treated it as a problem after her family complained to the school about students teasing her. Then she was given an ultimatum: one week to get it cut, or expulsion. Her mother, Sabrina Kent, doesn't buy the "distraction" line in the dress code, since it's so vague.

Vanessa says she'd rather not leave the school and her friends, but that she'd "rather have that than the principals and administrators picking on me and saying that I should change my hair[.]" You see? A troublemaking nonconformist, bent on rebellion and follicular dissent.

And is her mother helping to make clear that authority figures are in a position of authority because God has put them there for a reason? She is not:

"I'm going to fight for my daughter," Kent said. "If she wants her hair like that, she will keep her hair like that. There are people out there who may think that natural hair is not appropriate. She is beautiful the way she is."

And this, ladies and gentlemen, is why we have a breakdown of order in modern American society today -- kids thinking that they can wear their hair any old whichaway, and probably sing about it too.

Where on earth do the kids these days get such crazy ideas, anyway? Gotta have rules, or there will be chaos, and possibly dancing.

Nice-Time Update: Excellent news! The Morans at Faith Christian Academy have come to their senses, as reported by Mediaite's Tommy Christopher:

the school decided to back down on its demand that she cut her hair or face enshunment. They still want Vanessa to “shape or have her hair,” but they won’t expel her over it.

We are now officially in love with the word "enshunnment." (Use this word every day, must credit Tommy Christopher.)