Christine O'Donnell Bravely Refuses To Be On TeeVee Dancing Show 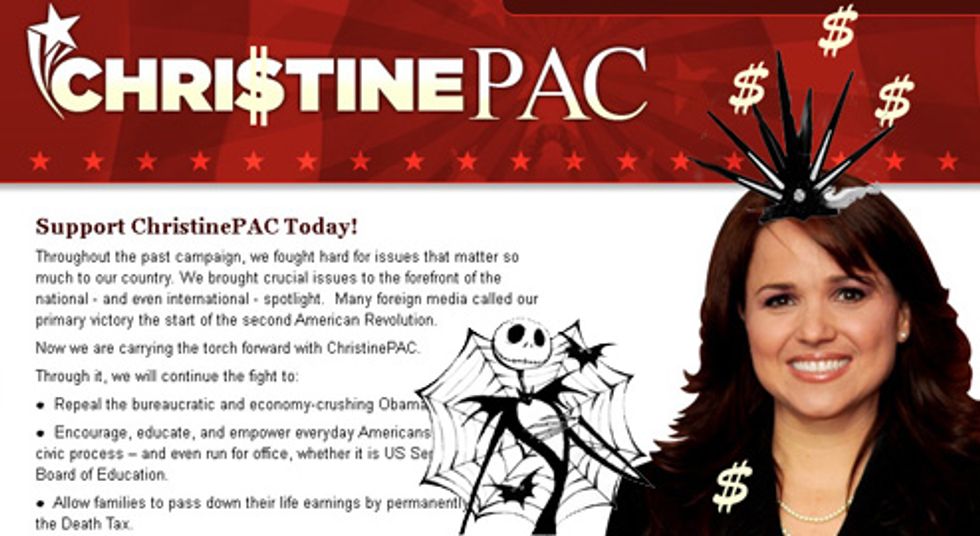 Delaware clown-fish Christine O'Donnell used to go on the teevee all the time because hey, free snacks backstage! Maybe even a few hundred bucks! And she would just say whatever popped up in her weird head -- masturbation, "dates" beneath Satanic alters, other witch issues. But, apparently, Christine O'Donnell had a brief moment of self-awareness today and sent out this press release saying she wouldn't continue her reality-teevee comedy career by appearing as the "new Bristol Palin" on the programDancing With the Stars. The press release was actually just an email from her ridiculous attempt at starting a Political Action Committee to pay her mortgage and Zappos' bills. Wait a minute, could these things be related in some way?

With O'Donnell, the "tea party" finally got a semi-telegenic new personality who was so vapid and idiotic that not even Fox News offered her a talking-head contract. At least Sarah Palin got elected to local and state office, right? Because Sarah Palin understood she would have to look like she had done something in life before she could cash in and become Alaska's insane Queen of Mean, on Facebook. O'Donnell has actually never done anything, not in her entire life -- unless you count serving a couple times as Bill Maher's airhead comic relief, about 15 years ago.

February 28, 2011 8:30 PM (Wilmington, Delaware) -- Christine O’Donnell released the following statement on her decision to decline the opportunity to participate on Season 12 of Dancing with the Stars:

“I’m honored to have been invited to participate in one of the few uplifting TV shows out there. The physical challenge made it all the more appealing. Meeting challenges head-on makes us stronger. Yet, for now, I have another challenge before me; to complete a book that tells the story of the 2010 election cycle with the dignity and respect it deserves.

“Many referred to the 2010 elections, and all the activity leading up to them, as the start of the Second American Revolution. This is because so many everyday Americans found themselves engaged in the civic process for the very first time. It’s humbling to have an opportunity to write a book that tells their story.

“It is my hope that this book will serve as a clarion call to my fellow citizen-activists by taking the reader beyond petitions and protests and articulating not just what we should do, but why we must do it.

“My goal is for the book and the new PAC I’m starting to serve as resources to activate and motivate those in this middle-class movement who worked so hard to launch the new revolution. If either of these projects were further along, I would be lacing up my dancing shoes right now.”

Uhh, we just did an image search for Dancing With the Stars, and none of the women have laces on their shoes. God, what is wrong with her? [Christine PAC]