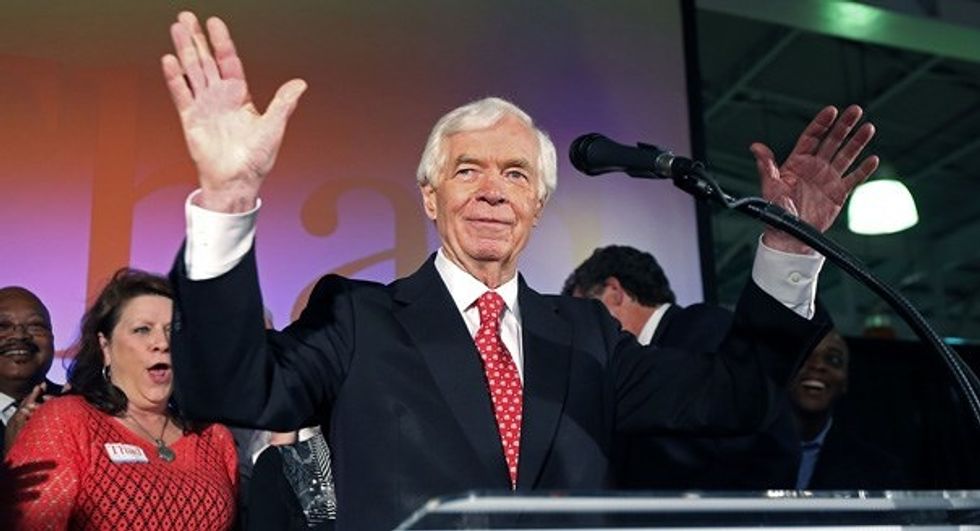 Rose Cochran, the wife of Mississippi Republican Sen. Thad Cochran, died at a hospice facility in Ridgeland, Mississippi, Friday at the age of 73. She had been at the center of one of the most bizarre episodes of the 2014 elections, although she was blessedly unaware of it.

As you recall, some idiot supporters of Cochran's primary opponent, tea party hero Chris McDaniel, had sneaked into the nursing home where Ms. Cochran, diagnosed with early-onset dementia and bedridden, had lived since 2000, so they could take photos of her that were supposed to shame Thad Cochran (because alleged affair with staffer) and guarantee victory for McDaniel.

Instead, the arrest of the blogger, Clayton Kelly, and three other idiots mostly just made McDaniel look crazy, not that he needed much help. One of the co-conspirators, lawyer and Central Mississippi Tea Party board member Mark Mayfield, later committed suicide, in June.

And just think, all that weirdness (except the suicide) was before the primary election and the run-off, which Cochran won, and which then spun off into a morass of additional weird, with McDaniel operatives locked in a courthouse, claims of election fraud because black people voted in the Republican primary without permission or something, and vows by McDaniel to fight forever -- we're pretty sure he won't ever concede. The whole thing made Glenn Beck so sad he had to go shoot some stuff.

On top of that, freakish homunculus / award-winning journalist Chuck C. Johnson attached himself to the story like a sleazy online remora, making up stuff about Cochran buying votes and offering to purchase copies of the photos of Ms. Cochran in the nursing home, because the public had a right to see a senator's ill and aging wife in a hospital bed, for freedom. We hear Chuck. C. Johnson has given Ms. Cochran until midnight to prove that she is actually dead.

In any case, RIP Rose Clayton Cochran, who probably deserved something better in her obituary than "was the unwitting object of a political clusterfuck of epic proportions." Still, she's just about the only one in the story who came out of it with a shred of dignity intact.