Civil Disobedience Gun March Guy May Not Really 'Get' Gandhi 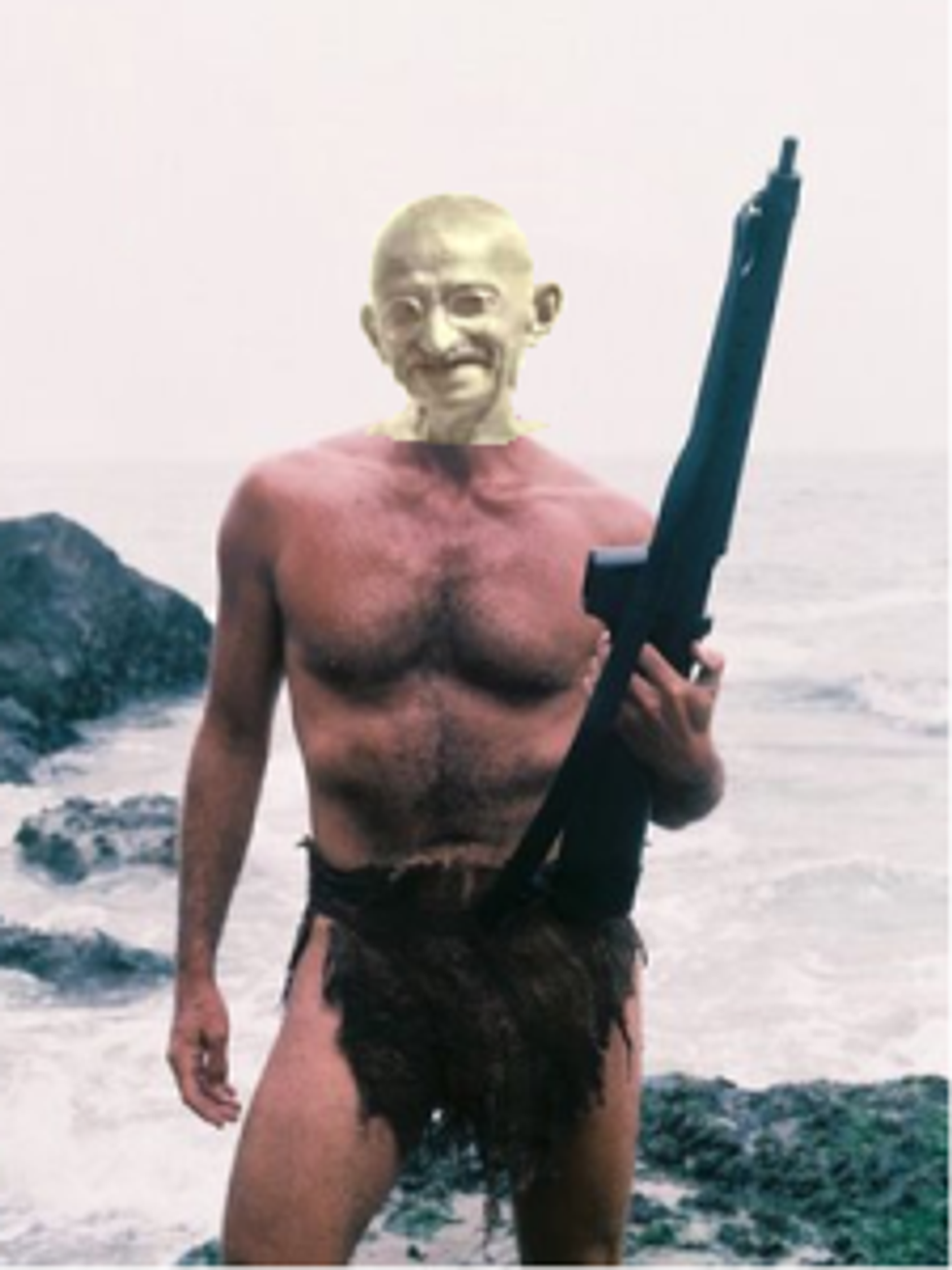 For years we've had to endure the weird idea that Martin Luther King, Jr. was a seekrit conservative because...well, we don't know why, actually. The whole thing is flummoxing, but we've learned to just tune those people out when they start explaining that the arc of the moral universe is long, but it bends towards making sure black people can't vote and gays can't marry. So, conservative MLK is old news. So 2012. The new hottness is tocompare your terrifying open-carry gun nut self to Gandhi. Yes, Gandhi, because why on earth not?

On July 4, Adam Kokesh hopes to lead 1,000 protesters armed with guns into Washington, D.C. to advocate for open carry. In Kokesh’s eyes, a crowd armed with guns compares to the nonviolent civil disobedience practiced by Mahatma Gandhi.

What is this we don't even. This must be some variant of nonviolent civil disobedience of which we were hitherto unaware, because the hippie/commie kind we know about definitely does not include guns, but what do we know? Break it down for us, gun man:

Kokesh answered the Washington Post through a series of text messages:

Suppose the D.C. police, as they have promised, block the marchers from crossing into Washington? How should they respond?

“With Satyagraha,” Kokesh, 31, texted The Washington Post. That is a term used by Mahatma Gandhi to describe his strategy of nonviolent resistance to British rule in India. [...]

Did his response of “satyagraha” mean violence is unacceptable?

“Only if absolutely necessary in defense of life or limb,” he wrote...

Compare Satyagraha to Kokesh’s event description on Facebook. Although Kokesh claims his march will “peacefully turn back” if confronted with “physical resistance,” he ominously warns the march will be violent if “the government chooses to make it violent.” He also proclaims that “[w]e will march with rifles loaded & slung across our backs to put the government on notice that we will not be intimidated & cower in submission to tyranny.”

We'd say that this misses the point of Satyagraha, but it is more like it misses the entire planet upon which Satyagraha might live. We hate to break it to you, gun guy, but Gandhi's civil disobedience was more things like praying, fasting, and walking to the sea to make salt. (Yeah, we had to look up that last one.) We are pretty sure the praying salt-making guy would not be down with the carrying loaded rifles guy. Also, too, it seems that Gandhi's philosophy didn't really have an out whereby if the gubmint starts it, you get to finish it with your pile of loaded weapons.

We don't know about you, but we cannot WAIT for our nation's birthday this year! Nothing says 'Merica like marching on your nation's capital with a fuckton of guns. We'll be at home non-violently reciting our version of Psalm 23: yea, though we walk through the valley of derp, we will fear no stupid, for whiskey art with us, forever and ever, amen.