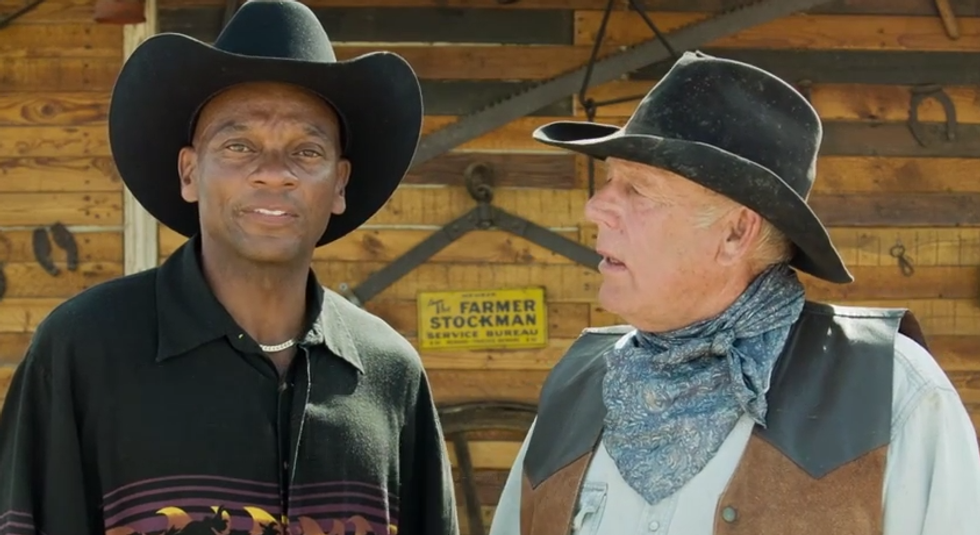 Oh, sure, we've called several ads weird, or even the weirdest. We thought maybe we'd seen all the weird that could be seen when Minneapolis mayoral candidate Jeff Wagner walked out of a lake holding a coffee cup last year, but this thing we are about to unleash on you poor Wonkers... well, it just blows Jeff Wagner out of the water.

Behold: Here is Cliven "I know something about the negro" Bundy in an ad for (and with) super-long-shot Nevada congressional candidate Kamau Bakari -- he's an electrician who wants to "repeal every word of Obamacare" and abolish the IRS, among other charming qualities -- in which they both talk about how they can't stand political correctness or all the whining from black people who think Whitey owes them something. Cliven acknowledges that black people have had some hard times, sure, with the slavery and everything, and Bakari assures him that he's not a racist, just a strong white man who isn't afraid to tell it like it is.

And then they challenge Attorney General Eric Holder to come to Nevada to meet them for an honest conversation about race. And Jesus, who knows, since they're already in Las Vegas, maybe they'll follow that with shooting up some adrenochrome taken directly from a live Oath Keeper's adrenal gland -- it's no good if you get it out of a corpse.

Watch, and prepare to have your mind blown:

We can hardly wait for the remixes.