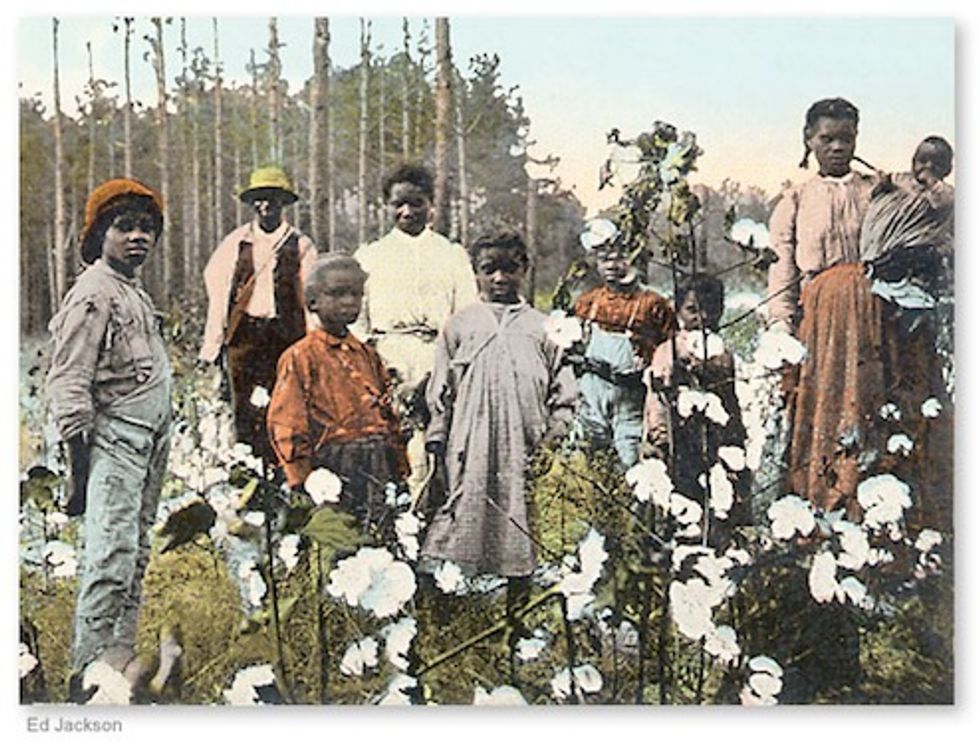 And because they were basically on government subsidy, so now what do they do?” he asked. “They abort their young children, they put their young men in jail, because they never learned how to pick cotton. And I’ve often wondered, are they better off as slaves, picking cotton and having a family life and doing things, or are they better off under government subsidy? They didn’t get no more freedom. They got less freedom.”

Yeah, why didn’t those poor blacks in North Las Vegas teach their young ‘uns to pick cotton and then send them to work the fields in some cotton-producing region of the United States? They could have a family life, all sitting around together in a barn or a tarpaper shack at the end of the workday, rubbing their blisters while they sing uplifting songs. Those families that haven’t been sold off piecemeal to other cotton plantations, anyway.

The condemnation from Bundy’s supporters over his retrograde views was swift and unstinting, by which we mean they jumped right to his defense. Puddle of ferret spooge Dana Loesch was spinning and deflecting like a blue-chip cover corner.

I hope no one is surprised an old man rancher isn’t media trained to express himself perfectly.

Right, Bundy should hire himself an image consultant who could teach him to keep the racism to himself. It’s important to note that Bundy wasn’t being interviewed by any media outlet when he made these statements, and there was apparently only one reporter in attendance at what was billed as a press conference. Mostly, Bundy was speechifying to a crowd of his supporters, who to our knowledge did not all immediately clutch their pearls and abandon their guard posts on the Bundy ranch. Give a guy a megaphone and keep telling him he’s a hero, and he’ll start thinking that every dollop of foamy pig shit dripping from his lips is a nugget of pure Exceptional American wisdom.

Pardon our cynicism, but we don’t think old Sagebrush Guy Fawkes made his comments as part of a larger discourse about tyranny and showing solidarity with all Americans against an overreaching big government. We’ll be happy to be proven wrong, of course. Maybe next week Bundy will invite some of those poor black folks from North Las Vegas to come out to his ranch for a racial solidarity summit and we’ll apologize to Dana Loesch for ever doubting her.

Also, knuckle-dragging Neanderthal Kurt Schlichter wanted to remind us that Harry Reid once used the word “Negro” unironically and nobody cared! Except that people did care and Harry Reid immediately called President Obama to apologize, as stated in the story Kurt linked to, thereby defusing the story before people went even more nuts over it. Anyone want to bet on how quickly Cliven Bundy apologizes for being a reactionary shitkicking moron?

Also, while we think Harry Reid was wrong to make that “Negro dialect” remark, he didn’t use the word “Negro” in the context of suggesting black people should still be picking cotton because at least then they would have a skill. Which in our judgement is just sliiiiiiightly worse.

And to think that just the other day the Supreme Court said that racism doesn’t exist in America anymore. Oh wait, Cliven Bundy does not recognize the existence of the federal government. So maybe we really have stamped out racism in our country. Yay America!