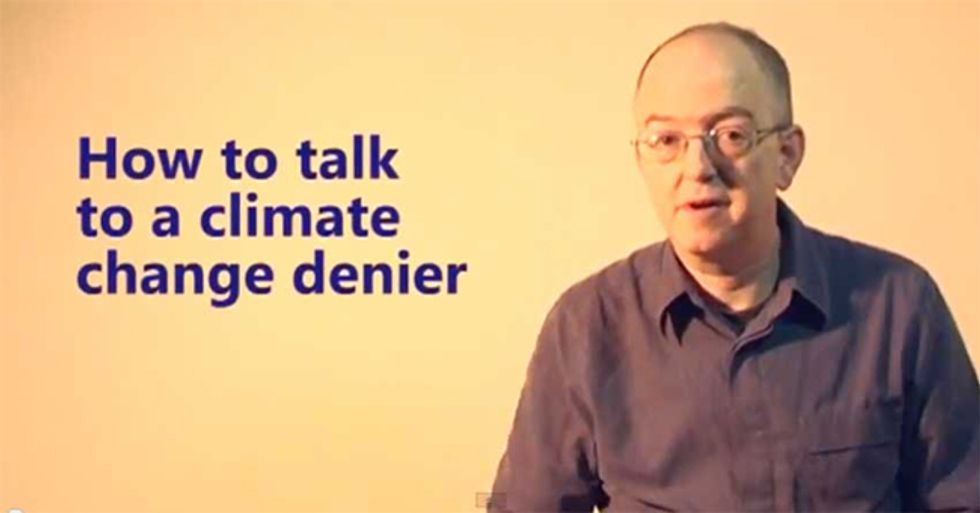 A special bouquet of greenhouse flowers goes to CNN anchor Bill Weir for theperfect reply to climate change deniers, please. You see, Weir was not terribly impressed with this Fox Nation story (aggregated from the Washington Times) that mocked Al Gore for attending a climate change meeting in Denver on a chilly, rainy day, because if it's rainy and cold during the summer, then climate change is a myth, right?

The dumb story tried to suggest that it was pretty darned embarrassing for Gore's Climate Reality Project to show up in Denver for EPA hearings with "'I’m Too Hot' trucks and offers of free ice cream" on a day when the morning temperature was "a chilly 58 degrees. Plus, it was raining." Hahaha, stupid warmists, you can't even get the climate to cooperate with you!

So Weir provided this succinct example of how to talk to a global warming denier:

And that, kids, is about all you really need to say, though there is of course more to be said.

Weir apparently felt a bit of "Midwestern guilt" over the first tweet and sent an apology -- for the language only, not the sentiments:

Needless to say, there was some grumping about how rude the mainstream media is to climate change "skeptics" from the willfully ignorant fuckstick community; the nine fulltime employees of Twitchy sniffed that it was darn well about time that SOMEBODY recognized that climate and weather aren't the same thing, since

Global warming alarmists can often get away with making “weather” and “climate” interchangeable, altering data or just being flat out wrong with their doomsday scenarios without enduring nasty insults from members of the media.

And as proof, they offered this brilliant reply to Weir, using twitter photos of Climate Reality Project supporters to prove that hot weather doesn't prove global warming either, so nyeah nyeah nyeah:

And while it is indeed true that a single hot day isn't evidence of global warming, it also doesn't mean that there is no data. Let's just let Neil deGrasse Tyson walk us, and his adorable Labrador retriever, through this one more time:

Climate change is real, and it's caused by human activity. We grew up on the west coast, and have no hesitation in saying that anyone who denies scientific reality has genuinely earned the title of willfully ignorant fuckstick.