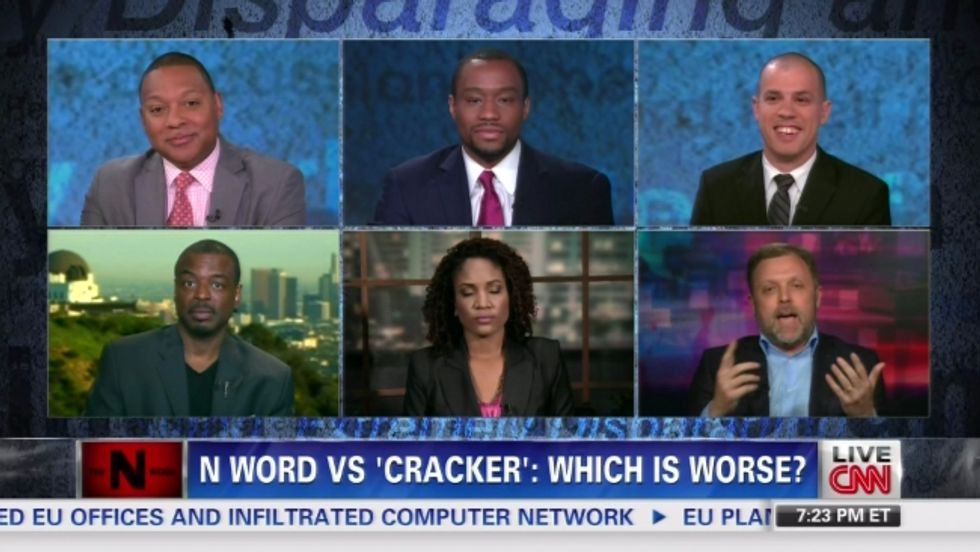 Oh, crap, CNN. Look, sure, we understand that the Paula Deen story and the start of the Zimmerman trial happened in the same week, and America Needs To Have This Important Conversation, and OK, we'll even give you some credit for trying to be serious -- actually, painfully earnest is more the case  -- about it, but then you go and throw in a chyron like this? Yeah, that sort of undercuts the "we are serious journalists looking at a serious topic" thing. Maybe the problem is just that TV is incapable of doing serious discussion well? Or maybe it's a CNN thing, we wouldn't understand.

We sort of felt a little bad, picking on this chyron, the one giant turd in an otherwise generally not-awful salad. God knows anchor Don Lemon at least tries to keep the discussion at a more complex level than "but blacks say that word!" But the chyron actually does sum up far too much of Lemon's reporting -- he seems at times absolutely determined to accommodate the bullshit "question" of whether "cracker" is just as offensive as "nigger," even though nobody in any of the reports had the least hesitation to say "cracker," much less felt compelled to call it "the 'c-word.'" That other word? It's quarantined, and rightly so -- mere quotation marks are not enough to render it powerless.

There are at least moments of political and linguistic seriousness in amongst the awfulness, and two cheers for CNN for not making a complete hash of it. But far too much of CNN's discussion is based on the dishonest false-equivalence question in that stupid chyron. Consider another recent segment where Lemon solemnly reported to Wolf Blitzer that people he interviewed on the street universally found the word "nigger" more offensive than "cracker"... but come on, did he really have to ask people their opinion of "honky?" Sorry, CNN, you can't really claim to be serious, and then check people's feelings about a word that fell out of non-comedic use right around the time that Richard Pryor and Chevy Chase did the sketch that should have been the last word on this topic anyway.