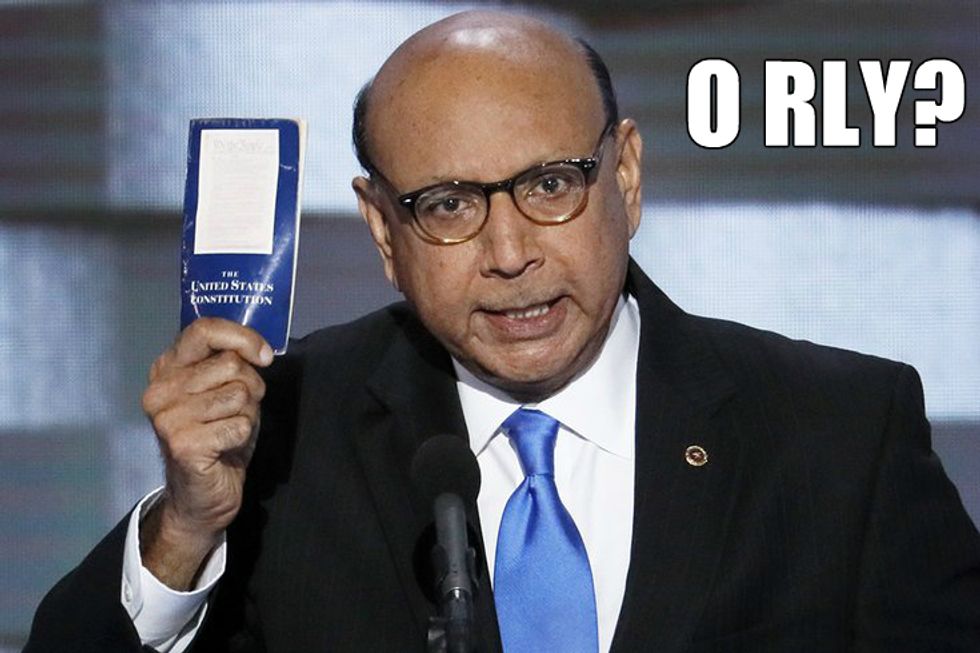 Or maybe it's actually about ethics in games journalism

Here's a little-known fact, Normie: An actual part of the job description for every high-level Trump staffer is "defending the indefensible." You could look it up. Or maybe not, what with all the nondisclosure agreements. What we are getting at is that now that The Candidate has decided he's officially an enemy of Gold Star families, or at least one of them, various Trump Turd Polishers have been dispatched to hit the talky shows and roll out a vigorous case that in the very public fight between Donald Trump and the parents of an actual war hero, the wronged party is of course Donald J. Trump. Which is why Sunday, on CNN's "Reliable Sources," we were treated to the improbable spectacle of Trump spokesperson "Jason Miller" (who appears to be a real person rather than Trump calling on the phone with a sock over the receiver) trying to explain that there is a much larger context for Trump's seemingly shitheaded attacks on the grieving parents of a soldier who saved untold numbers of fellow soldiers and civilians from a car bomb in Iraq in 2004.

seemed like a nice guy and very belatedly issuing a statement saying his son was a hero -- not a single bit of that really matters, because we are at war with RADICAL ISLAMIC TERRORISM, and that's the only reason we need to keep people like Mr. Khan and his family out of the country. Trump's position keeps changing; he's backed off his insistence on banning all Muslims to banning only people from countries with a terrorism problem; the Khans, originally from Pakistan, would probably have been screwed either way if Trump's policy had been in place when they came to the U.S. when Humayun was two years old. (In an alternate reality, the Khan family was in fact barred, Humayun Khan never joined the Army, and the speeding car bomb crashed through a gate and exploded in a mess hall where hundreds of GI's were having breakfast. You should see the movie It's A Trumperful Life, truly a classic).

Besides saying all those nice things about the family whose loss Trump has been downplaying -- did they have to interrupt a very busy business schedule or divorce their hot wives for younger ones? -- Miller tried to insist that Trump's fight with the Khans is a matter of the highest possible principle, which is Keeping America Safe from RADICAL ISLAMIC TERRORISM. CNN anchor Brian Stelter wasn't having a goddamn bit of Miller's nonsense, and it was beautiful:

Stelter: [why] is Donald Trump continuing to respond to Mr. Khan, rather than either staying quiet, allowing Mr. Khan to speak without being challenged or to acknowledge more forthrightly the pain this family is going through?

Miller: Well let me go and correct you on that point, Brian. Mr. Trump has praised Mr. Khan and in fact has called Captain Khan as a hero. But look, let's be clear about what's going on here, is that this is about --

And yes, Miller was about to say "Radical Islamic Terrorism," because after all, that's what this is all about -- when George Stephanopoulos asked Trump what he would say to the grieving parents, Trump immediately replied with these words of comfort: “I’d say, ‘We’ve had a lot of problems with radical Islamic terrorism.’”

And to think people call Barack Obama the "comforter-in-chief"!

After some back and forth about just what a swell but horribly short-sighted guy Mr. Khan was, Miller got to what he's been instructed to say is the real point, or should have been the real point if Mr. Khan only had his head screwed on straight and wasn't out to get Donald Trump:

Stelter: That's not what Mr. Khan's speech was about on Thursday. Let me put on screen a statement from Mr. Trump last night. He seemed to be trying to clean up the ABC interview. In the statement last night, Trump said the following: He said that "Mr. Khan has no right to speak the way he did on stage." Let me get the exact quote, because I don't want to misquote Mr. Trump. Let's see if we can put it on the screen here. He said that, Mr. Trump, "while I feel deeply for the loss of his son, Mr. Khan who has never met me has no right to stand in front of millions of people and claim that I have never read the Constitution, which is false and say many other inaccurate things." The First Amendment to the Constitution allows Mr. Khan the right to stand on stage and say whatever he wants. Why would Mr. Trump say he doesn't have that right.

Miller: That's not what Mr. Trump is saying at all.

Stelter: That's what the statement said.

Now look, just because Donald Trump says Khan has no right to say Trump hasn't read the Constitution doesn't mean Trump is saying he doesn't have that right (and if you want to be nitpicky -- which we do! -- Khan didn't say Trump hadn't read the document. He asked, "Have you even read the United States Constitution? I will gladly lend you my copy.") Clearly, Trump is questioning Mr. Khan's moral right to question Donald Trump's knowledge of the Constitution, whatever the hell is in there. It's mostly Second Amendment and Two Corinthians, right? Miller continued defending his very smart boss, and Stelter said no, I am not interested in your stupid talking points, and we fell in love with Brian Stelter right there:

Miller: What he's saying is that Mr. Trump has a right to defend himself. And to make clear what he's saying, this is about radical Islamic terrorism, and for him to be criticized like that he didn't think was fair. So let's get back to the broader point here, the fact that the media is completely --

Miller: Brian, Mr. Khan -- this is about, again, this is about radical Islamic terrorism, and this is about what's really going on here, and the fact that the media doesn't want to pick up and cover what's going on with this country. Where was the media outrage following Cleveland when we had supporters and survivors of those who either have been hurt or killed by illegal aliens in this country? There was no media outrage following that. But again, what we're talking about here is radical Islamic terrorism and that's what's important.

Stelter: You keep mentioning radical Islamic terrorism as if that's somehow linked to Mr. Khan. Why do you keep responding that way when I mention him?

Stelter: But that has nothing to do with this family, with this Muslim American family.

SO BIASED! It's almost as if Brian Stelter wanted to pin Mr. Miller down on the things his candidate had actually said, rather than accepting the pivot Miller wanted to make away from what Trump had said. That's dangerously close to doing journalism, and if Brian Stelter doesn't watch his ass he'll find there's no place for him at CNN.