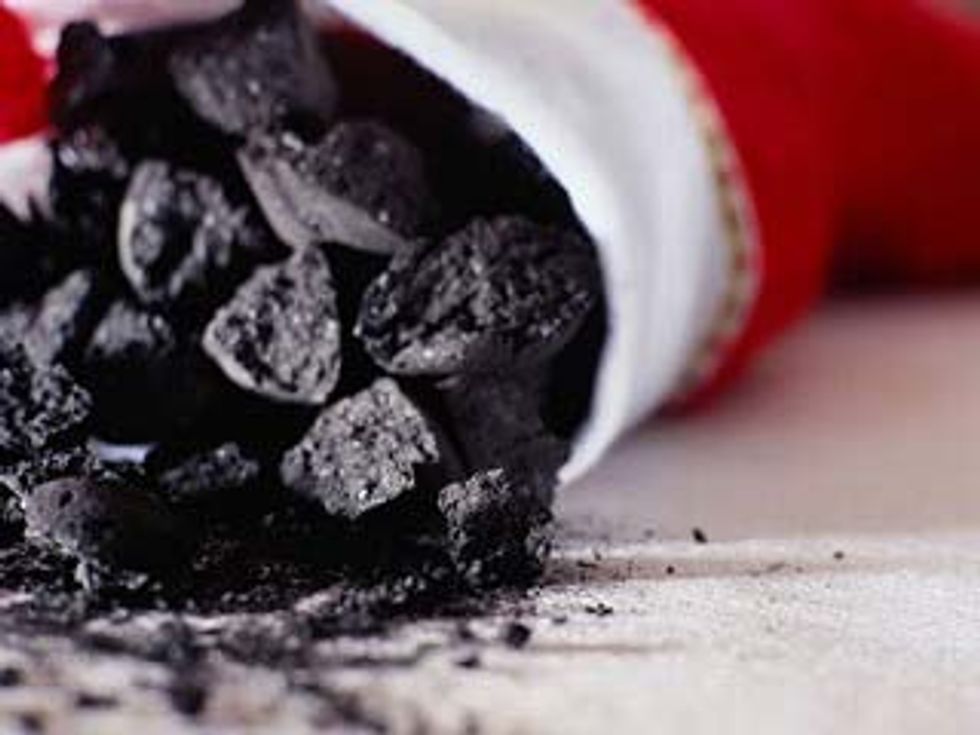 Coal! It's dirty, brittle, and buried deep underground. In a word, it's American. Which is why Fox Newsdeclared that Obama declared war on it, when he announced his intention to "promote fuel-switching from coal to gas for electricity production." Your move, coal.

Oh, you have made your move, and it is to contaminate 300,000 West Virginians' water by spilling an unknown quantity of "4-Methylcyclohexane Methanol (MCHM)" into the Elk River. MCHM causes "severe burning in throat, severe eye irritation, non-stop vomiting, trouble breathing or severe skin irritation such as skin blistering." All that, and it smells like licorice to boot!

The governor of West Virginia, who is named "Earl Ray Tomblin" because of course he is, has declared a state of emergency, which is pretty much the unofficial motto of West Virginia anyway. 300,000 West Virginians are being told not to drink their tap water, make baby formula, shower, brush their teeth, or basically even look directly at their faucets, and no, we will not be making the expected "do you really need to tell West Virginians not to shower or brush their teeth haw haw!" joke because that is Uncivil and makes them less inclined to vote for the folks we like.

Instead, let's laugh and groan at the name of the chemical company that caused the spill: "Freedom Industries"! Surely Ayn Rand's desiccated netherparts are stirring as she lies deathless in her grave, slowly turning to coal herself. Just kidding, she has been made of coal all along.

So big whoop, 16 percent of West Virginia's population can't use their precious tap water, and their precious hospitals and nursing homes and schools can't "operate." That's nothing compared to the estimated 10,000 Americans who die prematurely every year due to emissions from coal-fired power plants, not to mention the shameful travesty that is mountaintop removal mining.

And here everyone's in a lather about a little skin blistering, vomiting, and burning eyes and throats. It's like they've never eaten at Olive Garden before!