College Newspaper Frowns Upon Springsteenian Merry-Making, For Such Frivolity Is But A Pale Shadow Of Serious Politics 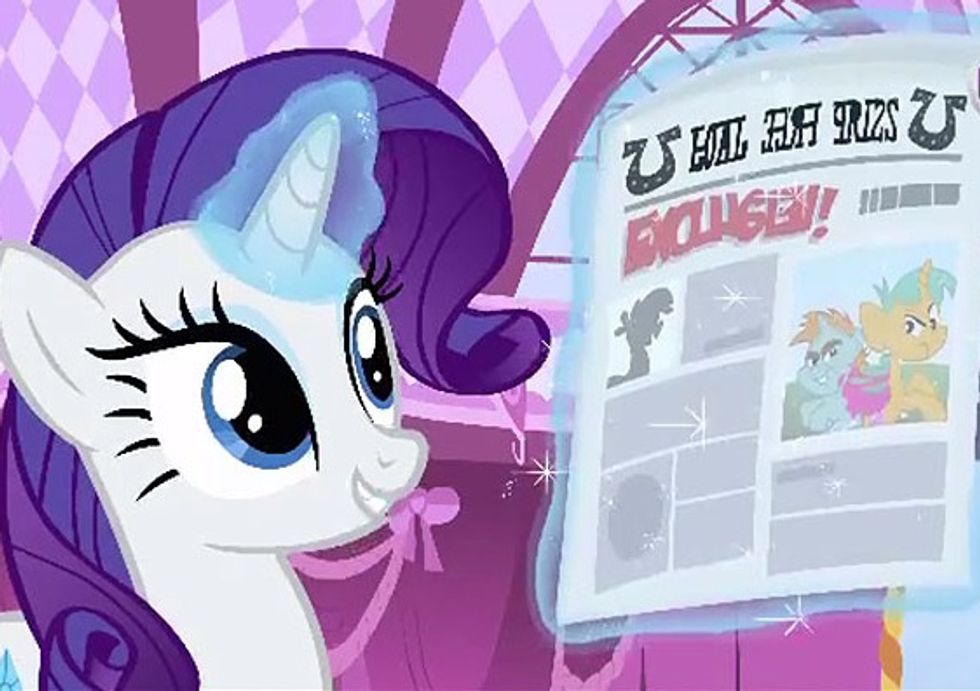 As the great writer Hanna Arendt once said, "Promises are the uniquely human way of ordering the future, making it predictable and reliable to the extent that this is humanly possible." And so it is with great pleasure that we announce that the Iowa State Daily, which we are now officially adopting as Wonkette's Pet College Newspaper, is indeed a keeper of its promises! Let us recap, shall we? At the end of their recent impassioned editorial about boorish knaves defacing the sidewalks of Academe with their impudent political messages, the young fogeys of The Iowa State Daily's editorial board proclaimed that, in comparison to such flagrant sidewalk-defacery,

Showing off celebrities such as actor Justin Long and rock star Bruce Springsteen aren’t [sic] much better, but we can wait to comment on that until tomorrow.

Well! Today, which is yesterday's "tomorrow," of course, has crept in its petty pace (as the Bard of Avon would say), and did the Iowa State Daily fulfil its solemn vow? Why, yes! Yes it did! If only political candidates of this day and age could be as reliable in following up on the commitments they make to the body politic!

In a scathing attack on the shallowness and hypocrisy of American Politics of Today's America, the paper scolds:

The latest word from the presidential campaign of President Barack Obama is that people should vote for him because he is supported by the likes of actor Justin Long and musician Bruce Springsteen.

The appearances of both celebrities -- who, apart from their talent at pleasing your eyes and ears, are not noted for much aside from their support of Obama -- are a typical example of puedo-events [sic] that excite people but deliver no substance. The subtle hope behind Springsteen’s concert last night is that, in addition to being entertained, those in attendance will consider voting for the same person he supports. Why else would Springsteen and his entourage fly to Ames, Iowa, to give a concert on a Thursday night?

"Not noted for much"? BOSS LIBEL!

Actually, we would endeavor to point out to the worthy tyros at the Iowa State Daily, in a spirit of friendly chiding or even raillery, that the explicit hope behind the Springsteen concert, or indeed any political rally, is to fire up people who already support a candidate and remind them that there is an election happening sometime in the next few weeks, in the hope that they will get off their Hot Pockets-widened butts, take a half hour off from updating their My Little Pony: Friendship Is Magic DeviantArt page, and go vote. Also, is "puedo-events" a typo or a failed attempt at a multilingual pun on "Sí se puede"? Or pedos? (They were probably thinking of pudendae, since they are college students!) These are important questions which must be considered by We the People who are members of the voting public!

But let us continue:

Insofar, [sic] the expectations for them were that they would entertain us or give a stump speech based on their celebrity rather than taking the time to figure out what in particular students are worried about and talk honestly about them. Long and Springsteen materializing on campus are not political events.

Also, since they are not political events, we have to wonder at why, then, the Obama campaign would have brought them here.

Unless, of course, they wanted to obscure politics altogether and administer a distracting opiate. To the extent that Obama is using people whose names are widely known to tout his campaign, his campaign is not founded on himself. The campaign of any politician should rest on the candidate himself- or herself.

We, too, are shocked, SHOCKED! that a political campaign might employ base sensory pleasures to engage young voters' attention! This is such a debasement of the art of rhetoric, which has fallen so far from the heady days of yore, when politics was a serious battle of ideas in the marketplace of ideas, not mere sloganeering or a lot of irrelevant hoopla, japes, or tomfoolery -- or as the ancient Romans referred to it, "the bread and the circuses." We, too, long for that wondrous golden age of the Lincoln-Douglas debates, when true statesmen bestrode the political stage. Campaign rhetoric: it was once an elegant weapon for a more civilized age.

To be effective, politics requires that judgments and decisions be the product of individual thought as we weigh evidence and arguments against one another. Listening to songs like “The Promised Land” and “Thunder Road” do not [sic] accomplish that.

Listening to music is not political activism! Also, we would like to point out that, pace our previous reference to a "light-saber," we have some qualms with Mr. George Lucas: space is a vacuum, and therefore starships should not go "whoosh," or fly like they're in an atmosphere! What is WITH you people????

Let Springsteen and Long come to campus, but let us make sure that their presentations of entertainment, such as they exist, be labeled as such.

Do not be deceived, you strumpets and debased pillocks, insofar as you may take amusement from these wand'ring minstrels -- if indeed "amusement" is even apropos of these "entertainers" with their electronically-amplified yowls of so-called "music" -- you should not mistake their hour of strutting and fretting upon the stage for activism, or even engagement. That is serious stuff.

Let us not confuse them with politics. Public service requires independent action rather than adopting the views of others because the people who hold them are popular.

Jesus. Look, we were nerds in drama club and on the Flagstaff High School Weekly Eagle, but we eventually let go of butthurt over just staying home playing D & D on Prom Night. That's what this is really about, isn't it?