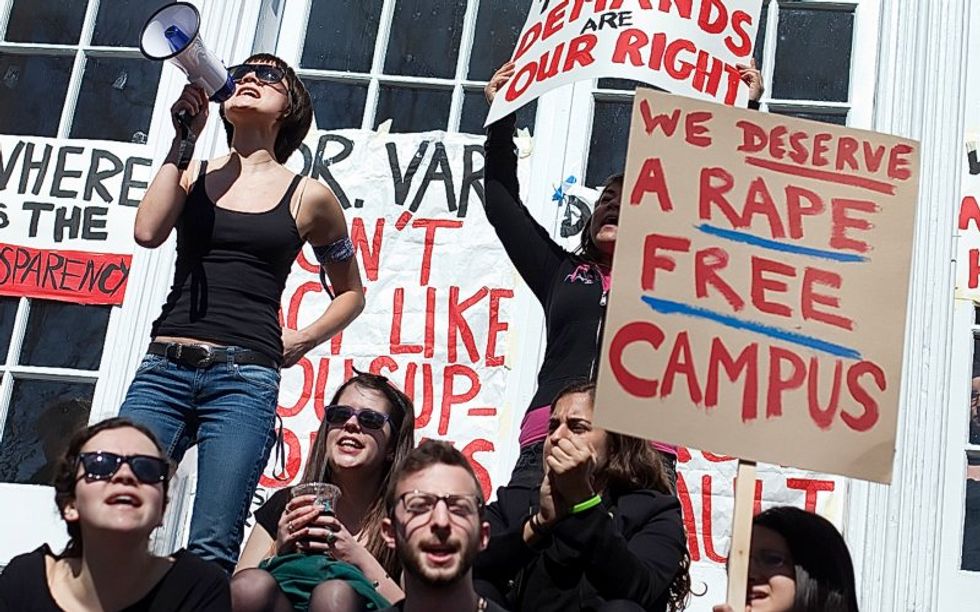 Think Progress reports that an American Psychological Association study released this month found that colleges and universities regularly engaged in a pattern of underreporting sexual assaults from 2001-2012. Oops! The study also found that during Department of Education audits, which are required under certain circumstances under federal law, "the reported numbers of sexual assaults increased by approximately 44 percent on average from previously reported levels."

But then, coincidentally, the reported numbers dropped again after the audits were concluded, which suggests, according to the study, that schools were only bothering to provide "a more accurate picture of sexual assaults" when the feds were paying attention.

Well, that is an extremely innovative approach to the problem of "uh oh, students won't want to come here if they think they will be assaulted all over the place." Tell the truth, if you must, while you are being audited by the feds (and if you are being audited, it is probably because the feds already suspect you are undercounting assaults), but otherwise, just lie about the number of assaults that happen, and then students will not even know they should be worried and perhaps attend a slightly safer school! According to the study's lead researcher,

Under the federal Cleary Act, schools can be fined $35,000 for each unreported crime, but the APA researchers think this isn't a deterrent, because it, uh, hasn't deterred schools with a history of undercounting and being fined from continuing to undercount and pay fines. The researchers suggest a fine of $150,000, plus surveying students directly about assault and making the results available in a public database. Sounds about right.

So, say you are a college, and a student is all, "omg, help, I was raped," but you don't really want to be seen as a school where students get raped all day long, because what a bummer. You can just be like, "Uh huh, yeah, we'll record your info, stick it right into this shredder, it's where we keep our most important assault statistics," and then, magic, problem solved. You are not a school with really high sexual assault numbers if you don't tell anyone. It will be our little secret!

Or maybe another solution could be to lock up all of the lady students, and then they will not even be available for assault purposes!