Colorado Bakeries Don't Have To Make 'Death To Fags' Cakes, How Is That Even Fair 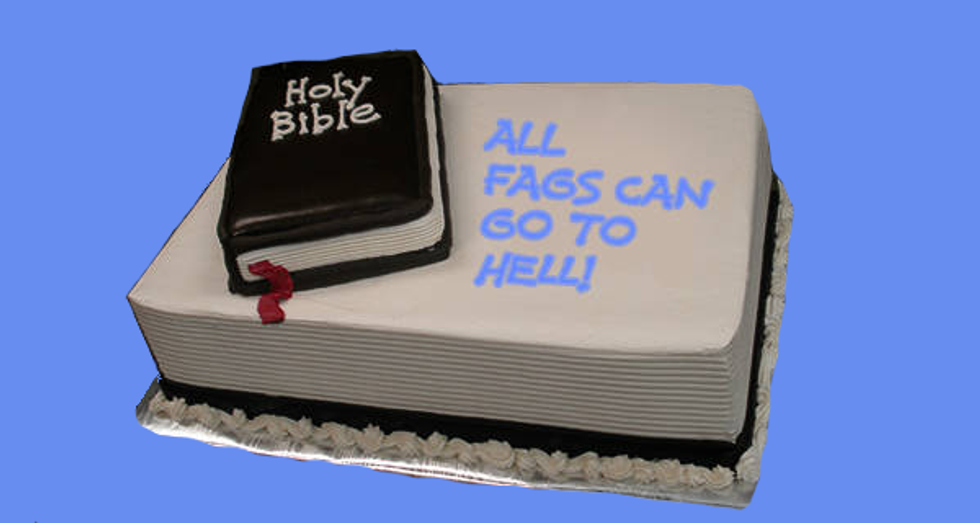 A Colorado wingnut religious leader named William Jack thought he had figured out a way to turn the tables on all them queers who insist on walking in and demanding delicious cake for their fake "nuptials." He thought he could show that, as always, Conservative Christians are the real victims. So he marched up into the Azucar Bakery in Denver and said hey, will you make me a cake that conveys the message that I hate fags? Instead of refusing to bake the cake, owner Marjorie Silva was like, "Sure, I'll make you the cake, and I'll even give you all the necessary implements you need to write Buttsechs With Guys Is Definitely Not MY Favorite on top, but I'm not writing it myself," because Silva has a policy against writing hateful messages on cake.

But that apparently wasn't good enough for the blithering wingnut Jack, so he ran off and cried to the Colorado Civil Rights Division about his religious freedom being violated, because one of the sacraments of his church is apparently eating cake with anti-gay messages written on the top. We wonder if he writes "Adam and Eve, Not Adam and Steve!" in A1 sauce on top of his steaks too. The Colorado Civil Rights Division has officially told him to fuck off:

The Colorado Civil Rights Division ruled Friday that Azucar Bakery did not discriminate against William Jack because the baker offered to bake the cake and let the customer write his own message, which the baker considered derogatory.

You see, you have to bake the damn cake. The problem, of course, is that these wingnut bakers seem to feel that, if they bake a cake for a gay wedding, they are actually willingly participating in the Traditional Gay Wedding, which features sodomy, baby Jesus crying in the corner, pizza (duh) and then cake. But no, sad put-upon bakers, you just baked a cake. That's all. It's your job. You weren't even invited to the wedding. No ritual sodomy for you!

We know anti-gay cake bakers feel that this imposes extra trials, tribulations and travails on top of their truffles, but this is America, and that is how things work.

Jack is still mewling about being "denied service" (no he wasn't) and says he will appeal, because we guess he likes being slapped around repeatedly and told to go away. When Jesus said that thing about his followers being hated in his name, he explained that would happen because his followers were commanded to act like total dicks, whenever they want, especially toward The Gays. Oh, it didn't say that? Silly us, we must have been reading our Bible upside down again!

By the way, William Jack's little stunt isn't really new. Several anti-gay activists have been doing this song and dance over the last year, in an effort to prove that gay bakeries somehow hate Christians. Yr Wonkette wrote a report about this for our previous organization, Truth Wins Out, focusing on a video in which anti-gay activist Ted Shoebat, the young son of rabidly fundamentalist Christian convert (and fake ex-terrorist) Walid Shoebat, repeatedly calls gay-owned and gay-friendly bakeries trying to order fag-hatin' cakes for a "traditional marriage celebration" that was not in fact happening. Many of the bakeries responded exactly as Ms. Silva responded to Jack, while a couple of them angrily hung up on him. We will remind homogay bakers now, as we did then, to bake the dumb cake, like Silva did.

Or you could "accidentally" get the order wrong and bake them a bag of dicks instead, whatever.