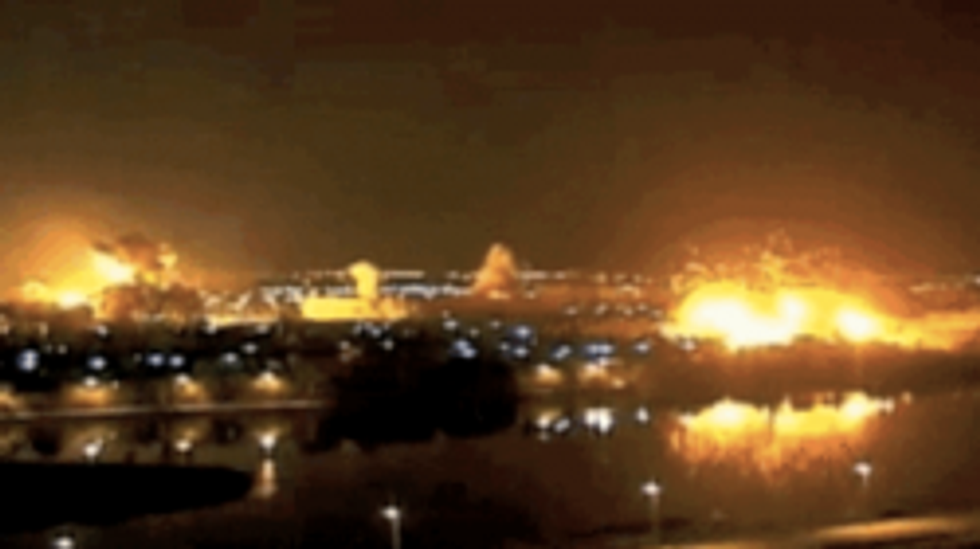 No for real though, the war is actually "over" now. Like, for real this time! It's so "over" there's no need at all for any scare quotes around the word "over." None at all. Why do we keep doing that? It's "over"!

But honestly we have very little to say about this because really, what are you going to say? Nine years, 4,500 dead US soldiers, a trillion dollars, conservative estimates of 100,000 dead Iraqi civilians (and then the not so conservative estimates, which, wait, remind us why we stopped talking about those?)—and in any event you'd think the very least that could've happened after nine years of war is that we might not still be just as pissed off as we were in 2003, but no such luck on that one.

It also doesn't help us be any less pissed that a war everyone basically forgot about years ago is now being referred to by reporters as " a war now indelibly imprinted on the national psyche." Hold up, Helene Cooper—if only it were! Because in a depressing twist on today's favorite catchphrase, 1% of our country fought this war while the majority of the other 99% couldn't even be bothered to pay attention. And they say Vietnam was the war that ended in disgrace.

Anyway, apologies if our blood pressure seems a bit high, we just weren't ready for the Times to make us rewind to Haditha yesterday, after a trove of confidential documents turned up in an Iraqi junkyard:

Iraqi civilians were being killed all the time. Maj. Gen. Steve Johnson, the commander of American forces in Anbar, in his own testimony, described it as “a cost of doing business.”

The stress of combat left some soldiers paralyzed, the testimony shows. Troops, traumatized by the rising violence and feeling constantly under siege, grew increasingly twitchy, killing more and more civilians in accidental encounters. Others became so desensitized and inured to the killing that they fired on Iraqi civilians deliberately while their fellow soldiers snapped pictures, and were court-martialed. The bodies piled up at a time when the war had gone horribly wrong.

God that war was SO AWESOME. Or do we mean "is" so awesome? No, no, no: "was." Because it's all "over"! Right. So we can totally get rid of all those executive war powers that Congress so blithely signed off on all those years ago now, right? Right??

Fast forward to 2011, and Democrats are doing more or less exactly what they did way back on that fateful night in October 2002, capitulating to Republicans (again) (as usual) (ad nauseum) on trying to fund the extension of the middle class payroll tax cut with a millionaire surtax. Which means now it's time for the showdown over the continuing resolution, which also means that here we are in the year 2011 and there's a legitimate threat of a government shutdown and Newt Gingrich is topping the polls and it's basically like we're living a repeat of 1995 and we're already dreading hearing that Montell Jordan song on the radio again.

Conservatives are now—all of them!—basically running as fast as they possibly can from Newt Gingrich, as the nominating contest which, in the rest of the country at least has boiled down to Anyone But Mitt is now, inside the beltway, very much an Anyone But Newt race. The Examinerthrew its support behind Romney, the National Reviewis recommending everyone take a closer look at Huntsman (or, uh, Santorum??), while Sully is lining up behind Ron Paul. Newt even lost the coveted (?!) Gary Busey endorsement!!

So good old fashioned debtor's prisons are making a comeback? "Collection agencies are resorting to some unusually harsh tactics to force people to pay their unpaid debt, some of whom aren't aware that lawsuits have been filed against them by creditors," reports NPR, and Americans are now serving time for missing medical payments. We're pleased to see how proportional our justice system is being in doling out punishments, though, considering four days in jail for $730 in outstanding medical bills seems totally in line with the basically nothing that happened to all those crooks who tried to topple the entire financial system.

Don't forget: the last GOP debate before the Iowa caucuses airs tonight at 9:00 on Fox News (read: don't forget to stop off on your way home from the office to stock up on hard alcohol). We'll be live-tweeting our grievances at @Gifzette, so be sure to follow along because we'll definitely be hammered and making complete fools of ourselves.

And finally today—cue the Andy Williams—it's the most wonderful time of the year again! That time of year, of course, when Salon's Alex Pareene rounds up the year's hackiest hacks in the business of political punditting. "Last year, our countdown was based on each hack’s entire career," says Alex. "We’re still looking at their whole bodies of work, but we’re focusing on the hackiest thing each entrant did in this rapidly ending year." This change in the rules clearly explains Brian Williams' poor showing in the 20-hole, and also suggests the smart money this year is on Megyn Kelly.