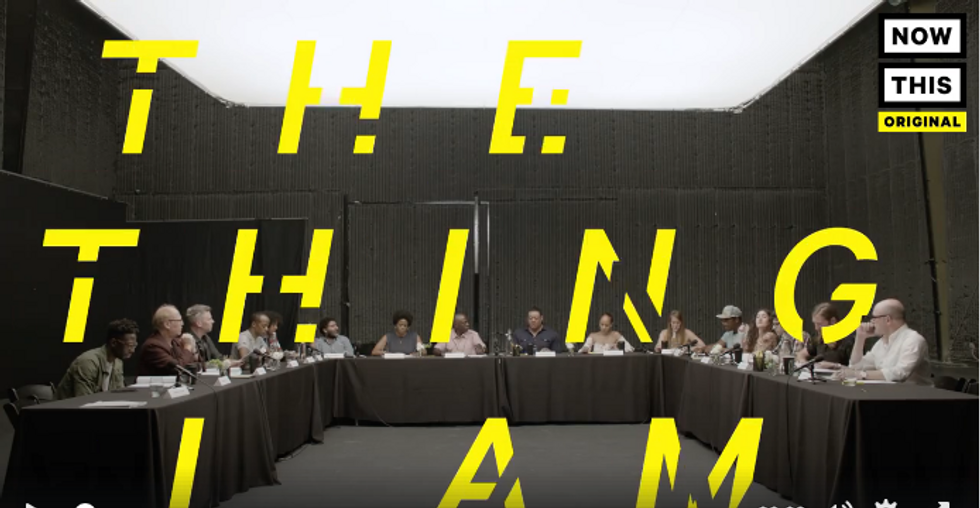 Before setting his sights on destroying our entire country, Steve Bannon had dreams of a more artistic nature. He wanted to make it big in Hollywood! He wanted to be a STAH! At least behind the scenes. As it turns out, he was not very good at that at all, owing to both his lack of talent and his inability to get along with people. With all the years he spent in Hollywood, he pretty much had as much to show for it as Donald Trump's First 100 Days.

His big Hollywood career, or what we know of it, involved financing and co-writing a documentary about Ronald Reagan inspired by the work of Nazi propagandist Leni Riefenstahl, making money off of "Seinfeld" to some degree that is unclear, and trying to make a truly dreadful sounding update of Titus Andronicus:

Bannon left Mount in 1991, but still wanted to make movies. He had long been drawn to Shakespeare’s play “Titus Andronicus,” in which Titus, a Roman general, sacrifices the eldest son of Tamora, the Queen of the Goths, and her younger sons rape and cut off the hands and tongue of Titus’ daughter. In 1991, Bannon hired [Julia] Jones as a screenwriting partner, and their first project was an adaptation of “Titus,” which featured galactic travel and an episode of “ectoplasmic sex” between a “lower human” (a Moor in the original play) and a space queen.

Yeah. That didn't work, so instead he optioned another updated version of the play, an off-broadway version written by Julie Taymor -- which did get turned into a movie. A movie which somehow starred Anthony Hopkins, HRH Jessica Lange and Alan Cummings and still managed to be terrible. Which, frankly, is a feat in and of itself.

But his thirst for modern Shakespearean adaptations did not end there. Oh no, it did not. For Steve Bannon -- a man with the worst taste in Shakespeare plays -- also wanted to update Coriolanus. And boy did he ever! In collaboration with his screenwriting partner Jones -- with whom he wrote that Reagan doc -- Bannon wrote “The Thing I Am.” A rap musical adaptation of the play set during the Los Angeles riots that followed the outcome of the Rodney King trial. Shockingly, this project never made it to fruition.

But the video-based news organization NowThis has done us all a glorious favor and staged a table reading of the script, for us all to enjoy:

Updating Shakespeare plays is nothing new -- West Side Story (Romeo and Juliet), My Own Private Idaho (The Henry plays), Just One of The Guys (Twelfth Night), Big Business (Comedy of Errors), I could go on. Not to mention that Romeo and Juliet update that was the bane of my sophomore year of high school.

However, what separates Bannon's work from these is that, while they either update the work entirely into modern English, or just use the original Shakespeare but put it in a modern setting, he attempts to blend African American Vernacular English with Shakespearean prose while having a clear understanding of neither of those things. He may as well have attempted to rewrite A Streetcar Named Desire in half-Southern drawl-half cockney rhyming slang.

Here is what the script is about, as per the Washington Post:

“The Thing I Am” presents Los Angeles during the riots as a war zone equivalent to the one created by the clash between the Romans and the Volscians. And Coriolanus’ rise and downfall in “The Thing I Am” present him as someone who could stop the violence in his own community but is temperamentally incapable of making the compromises and taking the strong stands necessary to do so. These ideas have a striking resonance with the ways President Trump now talks about American cities and African American communities.

In Coriolanus, peasants are rioting against the patricians (specifically Caius Marcius/Coriolanus) because they don't have any grain and are starving. Weird how that happens! Anyway, Caius Marcius is a huge jerk, and pretty much everyone hates his guts, including his fellow patricians, Agrippa in particular. Agrippa is like "Hey, how about we try not being jerks?" and Marcius/Coriolanus is not into that, because they didn't fight in the war or something. Anyway, Marcius then fights some battle and is victorious, and then goes to Rome and everyone loves him there and he joins the Senate, but then everyone finds out he's an asshole and they have another riot and boot him out, so then he goes to another place to try and fight Rome, but that doesn't work out and people kill him. THE END!

It may have been a while since I've seen Coriolanus, and it's not one of my favorites, but you get my drift.

The fact that Bannon looked at this play and was like "OH. I will set this during the L.A. Riots, you know, because there are riots in the play" is somewhat forgivable, and -- hey -- there might even be a way that could be done. But when you consider the fact that the L.A. Riots stemmed not from a conflict between black people, but over the officers in the Rodney King beating being found not guilty, a better analogy would have been to have made Coriolanus one of the officers or their attorneys or something like that. The most accurate analogy for Coriolanus, just in general, would be a Republican who was WAY EXCITED about getting to take food stamps away from poor people.

According to the Washington Post, the assessment by those who performed the reading was that this was Bannon's way of saying "Hey black people, listen to me, a white guy! I know how you should be doing stuff!"

“I do think he was trying to understand race relations and take this overseer look of ‘Here’s what you’re not seeing.’ I think he thought he had a greater understanding than the people who were going through what they were going through,” [Gary Anthony] Williams told me. “Now, whether he had the tools to do that or not is open to everyone’s interpretation. My answer would be no, spelled in pretty large letters, with a very curly font. … Again, I think Steve Bannon thought he had figured out black people, much in the way of Trump: ‘Carnage! Chicago is carnage! … American carnage! That I have the answer. That if you could listen to me, this can fix that.’ ”

[Rob] Corddry said he was particularly struck by the script’s heavy use of “when you remember who’s writing it — an inappropriate urban dialect. There’s liberal use of the n-word.”

Accurate! And it does seem like this is Bannon's way of getting to "say" the n-word as many times as is possible in a script, by having fictional black people say it for him. And unlike, say, the compleat workes of Quentin Tarantino, there is not even any awesome kung fu!

Of course, as much as we may be feeling grateful that no one was ever exposed to this monstrosity on the big screen, it is definitely worse having him in the White House --

for yet again, the world gets fucked because a bitter white guy was bad at art.