Come On Down To This Confederate Flag Rally, But Please Don't Say N*gger Out Loud 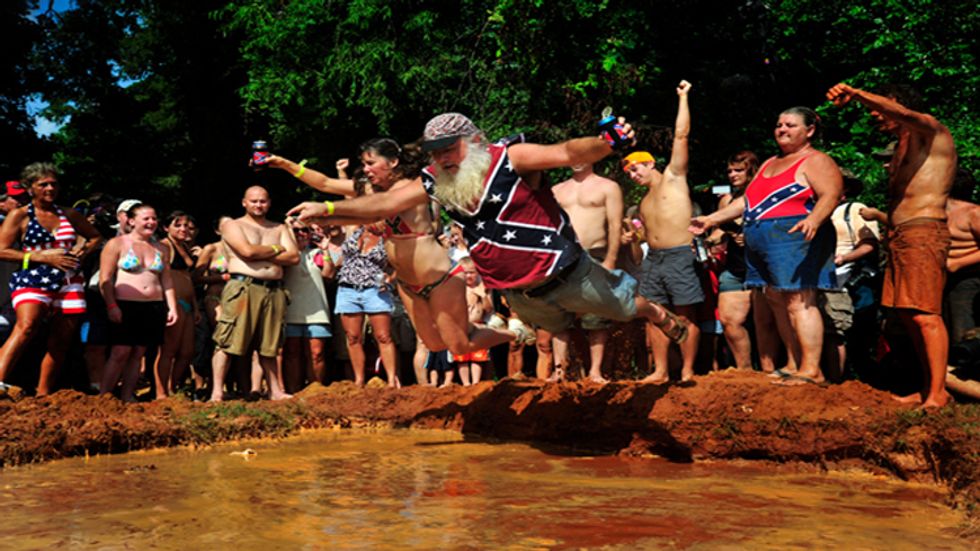 There's yet another rally planned to show support for the flag of the losing side in the Civil War, this time set for Saturday at Stone Mountain in Georgia, and just to make sure there's no confusion about the True Meaning of the Treason Banner, the organizers of the event have reminded attendees not to do anything uncouth, like shouting racial slurs. Can't imagine why a flag rally that's about "heritage, not hate" would even need such a reminder. Oh, actually, maybe we can.

The Facebook page for the event has a list of fairly simple rules, with a warning that "if you think you can't handle it don't come":

1.) NO alcohol, we do know its illegal and that will be opportunity for tickets/arrests

2.) NO taunting other vehicles, flipping other people off during the ride

3.) NO burning any flags of any type regardless of which flag

4.) STAY peaceful, which means NO violence

5.) NO racial slurs or offensive remarks ( I know everyone here is southern and born with most uprespect [sic] for everyone no matter the color but you have a few that like to act out and we will not allow it here!!)

That last one has been revised just a little bit since Talking Points Memo reported on it Tuesday afternoon, adding the explanation that of course Confederate flag wavers are just a happy bunch of people full of "the most uprespect," because why on earth would anyone think otherwise? Apart from maybe all those photos of the Charleston church shooter posing with his preferred flag. And a few KKK people marching around and shouting about racial holy war. You know, the outliers.

The announcement also has this reminder that the Liberal Media are always looking for an excuse to portray lovers of the Lost Cause as racists and idiots, and for some reason keep finding very rare, unrepresentative examples:

Remember there will be people everywhere! Possibly media and cameras, ONE piece of negativity and that will be what goes Viral and that is what we will be remembered for. This is to show our support BC we care about where we live and grew up, lets keep this Clean and Peaceful! Absolutely ZERO tolerance on these rules, if you don't think you can follow don't show up. There will be plenty others there who can follow the rules. See y'all there, thank you and God Bless!

And so the question must be asked: Is our wingnuts learning?

Also, too, since the "Christian flag" is apparently the next thing that the PC flag-grabbers are coming for, the organizers say they'd "like to also see more Christian flags flying like we do here for our rallys! [sic]." After all, Christian symbols go so well with the flag of treason, slavery, and segregation. Maybe they could bring a big wooden cross, too, and douse it with some gasoline to make it shine brightly after dusk.