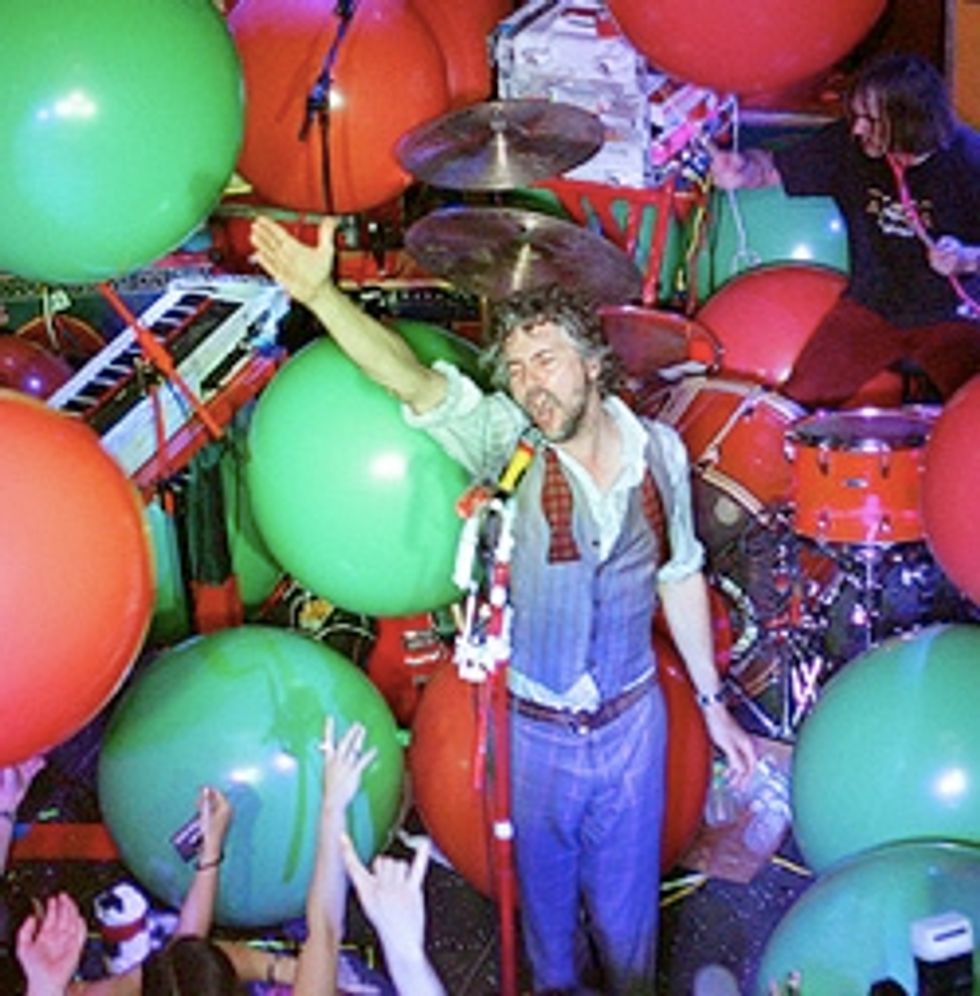 Oklahoma, a state as thick and red as artery blood, actually had a pretty fun idea for the kids recently! It opened an online vote -- they have the Internet there, too! -- for the public to select the state's Official Rock Song, the winner of which would be passed on to the state legislature for final approval. A number of liberal Internet music weblogs linked to the vote, and so the winner by a large margin was the song "Do You Realize??" by those delightful drug monsters, The Flaming Lips, who are from Oklahoma. The resolution to coronate this song passed the state Senate unanimously... but then it got to the House! And all it takes is one wingnut to start yelling "communism" and "death" to spoil everyone's fun. And all it takes is one liberal Democrat governor to tell that wingnut to eat a bag of dicks!

The wingnuts in the House helped vote down the resolution, and one of their pretend-excuses for taking these lazy conservative-base political points was that, uh, one of them there band members wore a communist tee shirt once.

Some legislators believe that a shirt worn by Flaming Lips bassist Michael Ivins when the vote winner was announced at the Capitol on March 2 was offensive. Ivins wore a red T-shirt with a yellow star-and-sickle logo, underneath a blazer. “I don't know why he made the choice to do that,” said Rep. Corey Holland, R-Marlow. “The great thing about this country is he has the right to make whatever statement he wants to make. I have the right to be offended by that.”

Holland said the choice of attire was not appropriate.

“I felt that the consequences of that were that I would not be able to support that as our state song,” Holland said.

Another wingnut claimed that he heard one of the Flaming Lips cursing at some point? A few years ago? Something about an alley. (Abortions?) He wants to light them on fire!

Rep. Mike Reynolds, R-Oklahoma City, also spoke against the measure, saying the band has a reputation for using obscene language, recalling band members used offensive language several years ago when the city of Oklahoma City named an alley after the band.

"Their lips ought to be on fire," Reynolds said.

This made the Flaming Lips very sad, since this guy not only rejected the will of the people but also wants their faces to die in a fucking fire.

Fortunately brave Democratic communist Gov. Brad Henry -- how the hell did he get elected? -- stepped in last night and told the wingnuts to fuck off, making him a hero among young adults in the Northeast's major cities.

“For more than 20 years ago, Oklahoma's own Flaming Lips have produced creative, fun and provocative rock music,” Henry said in a press release Thursday evening. “The music of the Flaming Lips has earned Grammys, glowing critical acclaim and fans all over the world. A truly iconic rock 'n' roll band, they are proud ambassadors of their home state. They were clearly the people's choice, and I intend to honor that vote.”

The signing of the executive order will be held at 2 p.m. April 28 at the Oklahoma History Center in Oklahoma City.

And that is how Oklahoma -- OKLAHOMA -- will have a Flaming Lips song designated as an official, government-approved state symbol.

Flaming Lips: Are they too communist for Oklahoma? [LAT]