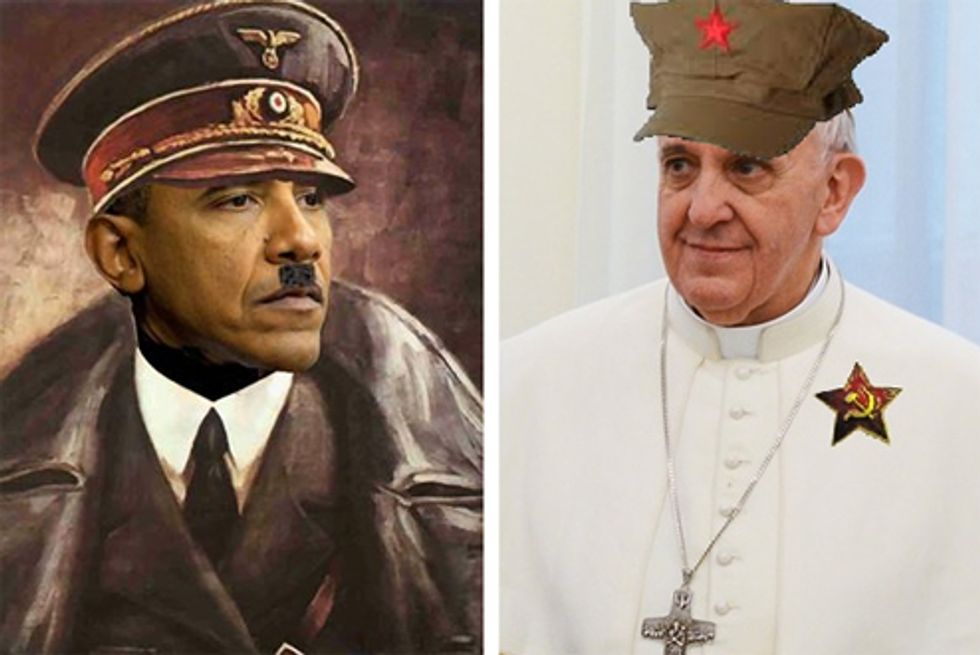 Rejoice, Comrades! Commissar of State John Kerry said today thatComrade Obama and Comrade New Pope will meet "at some point in the near future." The glorious coming together of the God King of Islamic Marxism and the Papist Enemy of the Free Market is expected to mark the start of a worldwide People's Revolution, or at least to result in a veritable frothgasm of rightwing butthurt.

CNN reports that Kerry met with Vatican officials Tuesday and discussed "foreign policy and economic issues, including Francis’ outspoken stance on income inequality worldwide," although he did not meet with New Pope himself. Kerry is said to be a big fan, however, and hoped to get an autographed standee of the Pope.

Apparently, Pope Francis has somehow managed to overlook what conservatives claim was the "unmistakable slap in the face" of the State Department's decision to relocate the U.S. Embassy to the Holy See from one building to another, or in ConservaSpeak, to "close the U.S. Embassy, hang Piss Christ at the receptionist desk, and gay-marry all the nuns to Ellen Degeneres."

Anyway, the two will probably have lots to talk about, what with their shared antipathy to free markets and their weird hatred of the obvious science fact that the only thing worth reading in the Bible is the Parable of the Talents, which tells Christians to invest heavily in the stock market. Not to mention the tendency of their supporters to wish they were far closer to being the radicals that their detractors insist they are.

But Barry better not be looking to take a ride on the Pope's sweet Harley-Davidson, because he's donated the bike to a charity that helps the homeless; they'll auction it and a leather jacket, both signed by Francis. Yes, yes, we know: now he just needs to do the same with the Vatican's art collection.

Follow Doktor Zoom on Twitter, and join him for the launch of his new breakfast cereal commemorating this historic meeting: Frank 'n' Barry.