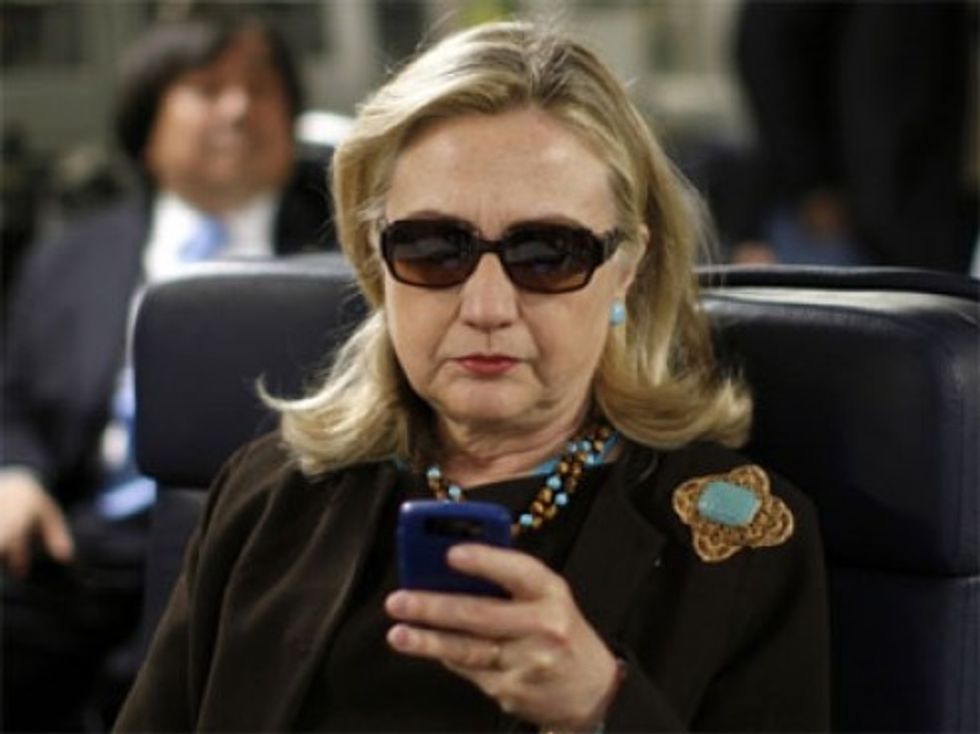 First, we had Benghazi. We can all agree that Benghazi is the single worst thing that has happened to 'merica in our lifetimes, right? Yes, olds, even if you lived through World War II. This is WAY FUCKING WORSE. Far worse than history's greatest tragedy, though, is the cover-up of the truth of history's greatest tragedy. Yes, this is just like Watergate, sheeple. First we had nefarious devious mendacious Hillary Clinton infecting her staff with a stomach virus to cover up her fake stomach virus to cover up her fake fainting toset the stage for her fake concussion. But the cover-up doesn't stop there. IT NEVER DOES. Now Hillz faked a blood clot so she can keep avoiding testifying about Benghazi. This woman will stop at nothing! Unsurprisingly, Ann Althouse is ON IT when it comes to uncovering the cover-uping:

With all that assurance that Hillary Clinton would testify, later that day, we heard the news that Hillary Clinton had entered the hospital with a blood clot. We weren't told the site of said blood clot. Was it her brain (recently concussed)? Was it her leg (where she had a blood clot back in 1998)? The former is a big deal, the latter, not so much. Why not specify the site, since it make such a big difference, medically? Oh, but we're told we must not display any skepticism, any hint of suspicion that the SOS is trying to avoid having to testify about Benghazi. The woman is ill. Only a clod would say a clot was a plot.

OK. Before we unpack the monumental level of stupid in that paragraph, let's first talk about "only a clod would say a clot was a plot." Really? REALLY?? The idea that somewhere out there is a writer (we are using that term so goddamn loosely) that slaved over creating that turn of phrase makes us weep for humanity. Now that we've got form-snarking out of our system, on to substance!

First, how about some completely nonsensical medical speculation? If the clot is in her brain, it is serious! If the clot is not in her brain, but instead where she previously had a clot in her leg, it is totes NO BIG DEAL. Yr Wonkette is not a physician-ly type, and neither, to the best of our humble knowledge, is Althouse. So, none of us are in the least bit qualified to speculate as to clot-seriousness now are we?? Next, we get some trademark Althouse passive-aggressive insistence that Hillz' spokescreature should have told us where the clot is and then Althouse would not be wildly speculating about severity. Stupid spokesperson.

Not all of the blame for this pile of nonsense can really fall on Althouse, however, though the idea of a pile of anything crushing Althouse is quite attractive. Most of her speculation seems ganked from an absurdly long and almost entirely useful-fact-free piece over at the Daily Beast. Yes, let infectious disease doctor Kent Sepcowitz, who we are sure is the life of every New Year's Eve party, drag you through an incomprehensible list of famous clots he has heard of:

Unlike the relatively bland “concussion after fainting” pronouncement from earlier this month, this terse press release from her spokesman smells a little fishy. First it is odd that we are not told where the clot is—usually the clot, referred to as thrombophlebitis, occurs in the leg, a condition suffered by former president Richard Nixon after leaving the White House. The clot can be uncomfortable but is only dangerous and even life-threatening if it breaks free and travels downstream into the lung—a pulmonary embolus, in medical parlance. This is a condition that former vice president Dan Quayle developed soon after his term ended and that almost killed Serena Williams last year. Given that Clinton already has had this condition and those who have had one episode have a predilection to recurrence, the lack of a reminder of the 1998 clot from her press people seems a strange oversight.

Many people have had clots of wildly different severity therefore because Hillary Clinton's spokesperson did not reveal the exact location and diameter of her clot to Ann Althouse and Kent Sepkowitz personally, this whole thing is clearly fake.

If the clot does not fit, you must not acquit. INPEACH HILLZ NOW.