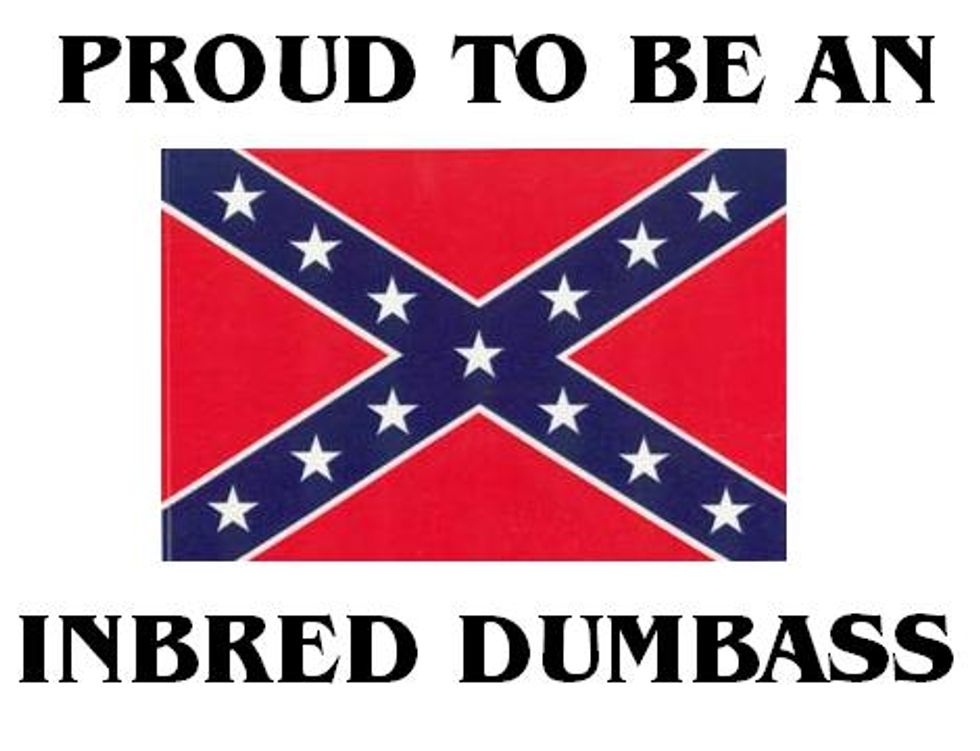 The Confederate flag just keeps slithering off flagpoles and license plates and out of retail stores lately, and the losses have been piling up like bodies in a Matthew Brady daguerreotype.

The most recent adieu to the scar-strangled banner came in Alabama, where, as of Wednesday morning, it no longer has a sweet home at the state capitol. Unlike in South Carolina, which actually has a law requiring a 2/3 majority in both houses to remove the flag, all Gov. Robert Bentley had to do was tell the grounds crew to take the flag down from a Confederate monument on the Statehouse grounds. We were sort of hoping that maybe a group of civil rights activists might have at least taped themselves standing around while a state worker removed the flag, so they could take credit for it, but no such luck.

Gov. Bentley was asked if the flag had been removed because of the murders in Charleston, and he replied (presumably after a brief "are you really asking something that obvious?" glance):

Yes, partially this is about that. This is the right thing to do. We are facing some major issues in this state regarding the budget and other matters that we need to deal with. This had the potential to become a major distraction as we go forward. I have taxes to raise, we have work to do. And it was my decision that the flag needed to come down.

Yes, you also just saw a Southern Republican governor saying not only that the Confederate flag had to go, but also that he needed to concentrate on a tax hike. Are we entirely sure we're still on Earth Prime? AL.com also notes that in addition to taking down the battle flag, the workers removed three other versions of the Confederate national flag as well. Guess a Southern Man don't need it around anyhow.

In South Carolina, the Citadel -- which was created to stave off slave revolts and to intimidate troublesome blacks like the original congregation of Emanuel African Methodist Episcopal Church -- announced that it would be removing the Confederate battle flag from its chapel.

Elsewhere, Georgia and North Carolina both announced plans to remove versions of the battle flag from specialty license plates sold by the states, now that the Supreme Court says they can. For your scorecard, that leaves Alabama, Louisiana, Maryland, Mississippi, and South Carolina as the states that, as of noon Eastern, at least, still have Confederate flag license plates.

Tennessee Gov. Bill Haslam has announced he'd also like to remove the bust of Confederate General Nathan Bedford Forrest from the Capitol rotunda, seeing as how Forrest wasn't just a general, but also a notorious early leader of the KKK (though maybe not its first Imperial Wizard, says the wiki).

We can get behind removing the bust, but agree with Gawker that the insanely bad sculpture of Forrest on private land near a freeway in Nashville should stay, because in its misshapen hideousness, it is "the most fitting monument to the ugly idiocy of southern history." Just look at this goddamned thing:

The Sound And The Spurious

Mind you, not everyone is pleased that the Confederate flag is under siege, because what country do you think we live in, silly? On The Fox and Its Furry Friends Wednesday morning, co-host Steve Doocy shared Rush Limbaugh's worries that First They Came For The Flag Of A Bunch Of Traitors, and next they'll come for Old Glory, because that's how it is with America-hating liberals, as Rush explained:

It makes perfect sense. If you take a look at the timeline of progression of events, the speed and rapidity with which the left is conducting this assault on all of these American traditions and institutions, if you don’t think the American flag is in their crosshairs down the road, you had better stop and reconsider.

Maybe Rush is confused about what an "American institution" is, seeing as how the Confederate States of America was a foreign country that declared war on the United States, and lost badly.

Idiot manchild, professional victim, and pee enthusiast Todd Starnes also frets that Libs will come after the Stars and Stripes, because he is a moron:

It's only a matter of time before the cultural revolutionaries destroy films like Gone with the Wind and Forrest Gump and burn copies of Tom Sawyer and Huckleberry Finn. Stalin and Lenin would be bursting with pride. You know who else has been doing some cultural cleansing? The Islamic State -- bulldozing their way through history -- turning Iraq's heritage into rubble. And mark my words -- the left's cultural crusade will not stop with the Confederate Flag. They will use the perception of racism and hatred to whitewash history and silence dissent. And one day -- very soon -- I predict they will come after another flag -- the one with broad stripes and bright stars. So don't be terribly surprised when even Republicans stand idly by as they burn the Star-Spangled Banner. Run Forrest, Run.

Yep, we liberals just hate that Mark Twain for his allegiance to white supremacy and dedication to the Southern Cause. Christ, Starnes, have you even read Twain? You're the one who should hate him, since he couldn't stand religious hypocrites, blind patriotism, and overseas adventures in imperialism. Also, you don't need to worry about Gone With the Wind, either -- it's so thoroughly campy that you can depend on The Gays to keep it safe.

Even the Gray Lady has a piece on the sad pushback from defenders of the Confederate Treason Rag. We liked their opening vignette, featuring a sad old defender of the flag:

“This is the beginning of communism,” said Robert Lampley, who was standing in the blazing sun in front of the South Carolina State House ... “The South is the last bastion of liberty and independence. I know we’re going to lose eventually.”

“Our people are dying off,” he went on, before encouraging a white reporter to “keep reproducing.”

The New York Times didn't have a photo of Mr. Lamply, but we're pretty sure we've seen his face somewhere:

Just about all that's left now is for the reanimated corpses of Jefferson Davis, Robert E. Lee, and Stonewall Jackson to rise from their graves and yell "Take the fucking thing down already! We lost!"