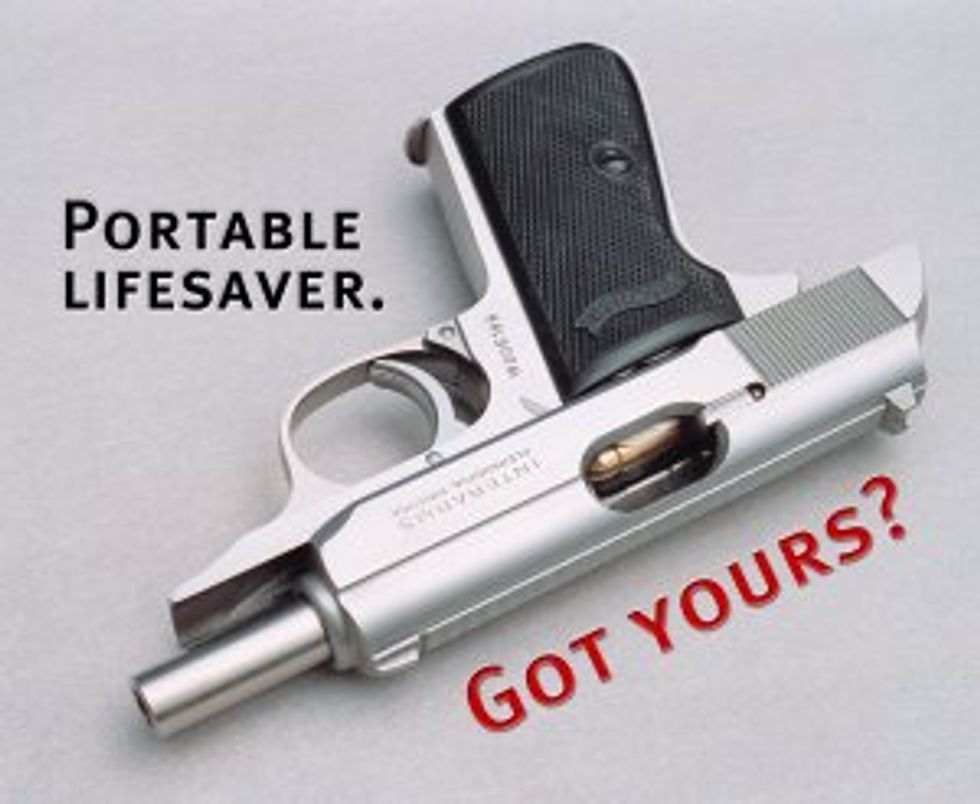 In another victory for the Second Amendment, students and faculty with concealed carry permits will now be allowed tokeep their weapons with them on campus, YAY! Idaho is now guaranteed to be safe from campus shootings forever, because if anyone ever tries a mass shooting, there's guaranteed to be a Responsible Gun Owner nearby ready to take them down, just like mass shootings were ended by ordinary armed citizens in all these cases. Or maybe we meant all these.

The law was passed despite opposition from the presidents of all eight of the state's public colleges, which just proves how necessary it was -- the college presidents may in fact be some of those leftwingers who need to be shot.

Heaven knows the bill was vigorously debated -- representatives from the NRA were invited to introduce the bill in the state Senate and argue in favor of it, and police chiefs from Boise and two other college towns were excluded from testifying against it.

Idaho Gov. Butch Otter signed it, of course, because Second Amendment. He noted that there are already some exceptions to Second Amendment rights -- like how people need to get special permission from ATF to own machine guns -- and said in a statement,

“This is not the circumstance to carve out another [exception] ... We all will be watching closely to ensure the interests of Idaho citizens are served while their constitutional freedoms are protected.”

Sounds pretty reasonable to us -- and the interests of Idaho citizens are in having lots of guns everywhere, as indicated by the influence that the NRA has in the state lege -- second only to agriculture, according to the Idaho Statesman. So that should work out just fine, especially when an angry student disagrees with a professor. Yr. Doktor Zoom has had a few conversations with upset students who he's pretty happy were not packing at the time, thank you very much.

At least one good thing came out of the debate: Boise State University forensic medicine and criminal justice professor Greg Hampikian wrote a pretty awesome bit of satire called "When May I Shoot a Student?" which might just be the "Modest Proposal" of the guns-on-campus debate. Needless to say, he has been derided as a fool -- anyone knows you can shoot a student when they're threatening your life, duh.

And it turns out that Idaho is sort of a trendsetter -- Thursday night, the Indiana legislature passed a bill that will allow people to store guns in their cars in high-school parking lots. It's a bit short of the ideal of having a lot of 17-year-olds walking around the schools carrying guns, but it's a step in the right direction, because now people can at least defend themselves on the dangerous trip to and from school, since you never know when you'll need to shoot someone from your car. Polite society, here we come!