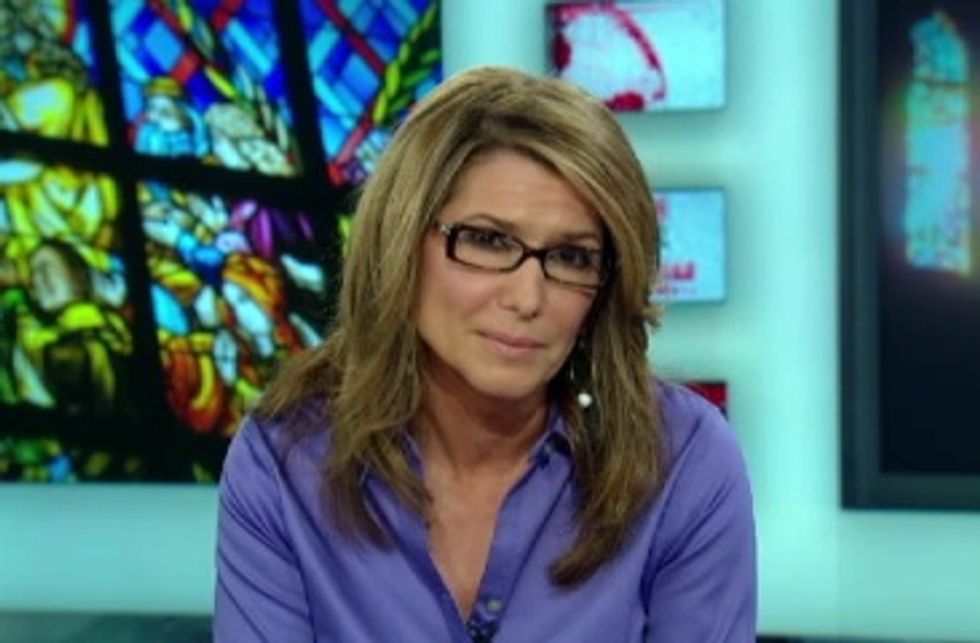 Get the plaquemaker on the phone — we've got an award to give out.

Thursday, sinister Kristen Wiig-lookalike Carol Costello did a short piece about the recent Pew study that found 68 percent of the millennial generation reports they have at some point never "doubted the existence of God." That's down from 76 percent three years ago, and you know what that means — MEDIA FREAKOUT TIME.

Talking Points Memo put up a blog post titled "Belief in God Plummets Among Youth," which, if one actually spends more than half a second reading the article, you would know is ridiculous. To be fair, it's a big improvement over their original headline, "Young Americans Abandon God in Droves (CHART)." But CNN would not be outdone in the "blowing things out of proportions" sweepstakes, no sir.

CNN brought on Jesse Galef, spokesman for the Secular Student Alliance, a group well-known for its enthusiastic endorsement of a level of heathenry among youth that undermines Our Country's Foundation by providing legal support to those who want to form student groups that question religion. Before you know it, somebody might be behaving well without the threat of eternal damnation.

But don't be afraid, noble Christian brainwashers — Carol's got your back. And she's doing it, if the stained glass picture behind her is any indication, from a TV church.

While Galef spouted ridiculous things like people should "explore their beliefs fully" and "come to their own conclusions," Costello called him out on his nonsense, saying, "Some Christians might argue that because such groups are in high schools, you're sort of indoctrinating young people at a time when, you know, it's not proper because they're not really old enough to handle questions like that."

There's so much truth in that question that we've gotta break it down to fully appreciate the lofty level of journalism Costello has managed to achieve:

—OK, we have fictional opposition to atheism from fictional Christians. No fictional Jews could be reached on deadline.

—Good. Now we have a fictional argument, too.

"...you're sort of indoctrinating young people..."

"...they're not really old enough to handle questions like that."

—How DARE you think a 17-year-old is old enough to evaluate his fundamental beliefs! He was old enough to hear about the origins of the universe at age 6, but he couldn't possibly handle a discussion of these origins right before he goes to college. He's IMPRESSIONABLE, Jesse! You're going to wreck the impression we already worked so hard on!

He responded, in typical fascistic atheist fashion, by saying that "it's not about forcing anybody to be nonreligious. It's about giving them a safe place to discuss and live out their values." THE NERVE OF THIS YOUNG MAN.

Don't worry though — Costello has more fictional opposition in the holster.

"Some people accuse organizations like yours of trying to shape the beliefs of young people, and they say that that's dangerous," she said. "Because most religions, most religious people you know, religion helps you in your life, it's not a bad thing."

His answer was interrupted by footage of the Pope.

Anyway, congratulations, Ms. Costello. You can put this plaque on your shelf until the Peabody arrives.