Congress Destroyed This Climate Satellite We Needed, Because Have You Seen What Mini-Storage Costs Lately??? 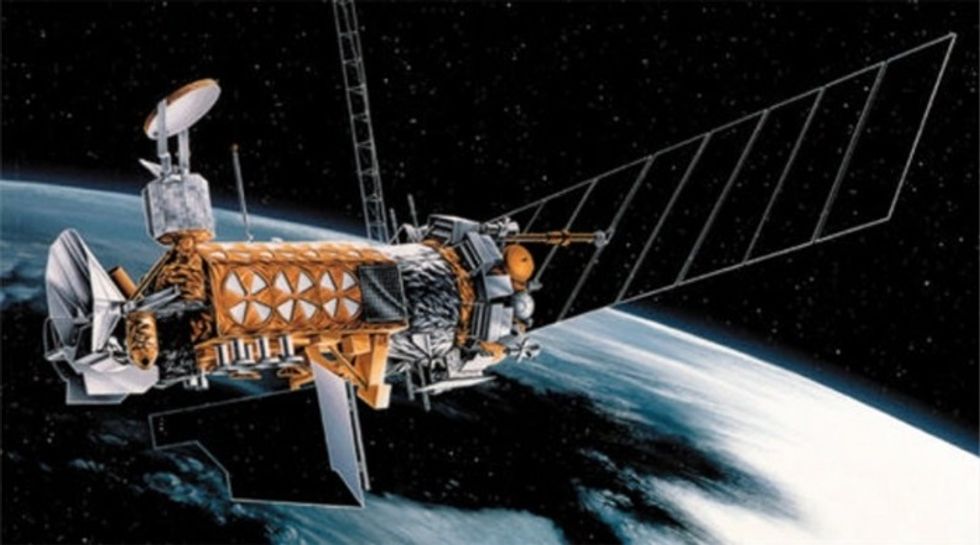 Fact: It didn't have any lasers to kill terrorists, so what good was it?

The Republican War on Science continues to make advances, as we learn this week that one of four aging satellites used to monitor dwindling polar ice has failed, and that while there had once been a twin satellite that could have replaced it, Congress voted earlier this year that it was too expensive to store, so it was dismantled. Bummer, huh? The Guardian reports that the earliest a replacement satellite can be launched will be 2023, by which time the remaining three satellites in the program will also be dead, leaving one of the main programs for researching climate change without any data.

“This is like throwing away the medical records of a sick patient,” said David Gallaher of the National Snow and Ice Data Center in Boulder, Colorado. “Our world is ailing and we have apparently decided to undermine, quite deliberately, the effectiveness of the records on which its recovery might be based. It is criminal.”

Well, sure, maybe it's something you might worry about if global warming were real, but if you don't believe diseases even exist, you don't need the patient's medical records, now do you? The House "Science" Committee already decided back in 2015 that the best way to deal with climate change was to stop studying it, so now we're starting to see that strategy bear shriveled, inedible fruit.

The defunct satellite was one of a series of military weather satellites, the Defense Meteorological Satellite Program (DMSP), which were used to collect weather information for the military as well as for civilian science, using microwave sensors to track the amount of Arctic sea ice. The satellites have shown a decline of millions of square miles of sea ice in the last 20 years, reducing the amount of sunlight reflected back into space -- one of those "feedback effects" of global warming which is likely to make the problem even worse, increasing the rate of sea ice decline. And now we'll be less able to study the problem thanks to the penny-wise thriftiness of Congress:

At present three ageing satellites – DMSP F16, F17 and F18 – remain in operation, though they are all beginning to drift out of their orbits over the poles. The latest satellite in the series, F19, began to suffer sensor malfunctions last year and finally broke down a few weeks ago. It should have been replaced with the F20 probe, which had already been built and was being kept in storage by the US Air Force. However it had to be destroyed, on the orders of the US Congress, on the grounds that its storage was too costly.

Problems with the DSMP F19 satellite had already been observed in the spring of 2016, and the Air Force temporarily held off destroying the spare F20 satellite in hopes that Congress would restore funding for its launch, but nah, why would they do that? Space News reported at the time,

DMSP F-20 has been a sore point with Rep. Mike Rogers (R-Ala.), the chairman of the House Armed Services strategic forces subcommittee. In January, he said the Air Force wasted $518 million on DMSP-F20 and that the Pentagon would have been better off burning the money in a parking lot.

What fun they are having at the EPA!

The cost of storing the backup satellite had been $40 million a year, and thank goodness we saved all that money, because we need to give the super-rich a tax cut. The news isn't entirely grim, however -- while the United States has decided its science priorities will now be dictated by the Bible and the coal industry, Europe,Japan,China, and other countries still think science is kind of a big deal and will probably continue launching satellites to study polar ice. Heck, why should we even bother?

In the meantime, the eventual failure of the remaining DMSP satellites will be great news for congressional opponents of climate science, since they'll be able to say American satellite data on polar ice decline simply isn't there, so why do anything if there's no evidence?

Yr Wonkette is supported by reader donations. Please click here to help us keep our servers running and our writers paid, and to help us prepare for selling seafront property in Montana.