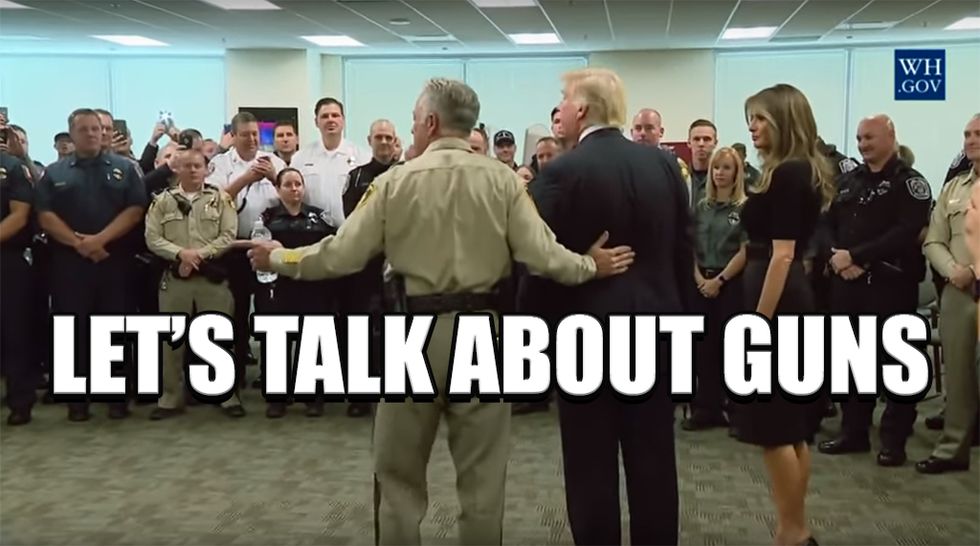 Happy Thirsty Thursday, Wonketariat! We've got newses, we've 'splainers and we've got puppers; but here's some of the things may be talking about today!

Puerto Rico's Treasury Secretary is desperately pleading for billions in funding in order to avoid a complete government shutdown at the end of the month.

Gun fetishists in the Republican party are finding it hard to resist calls for gun control, but they're focusing their aim on "bump stocks" so that they don't overshoot the NRA.

Trump's administration has already been working quietly to roll back gun regulations, like carrying on federal lands, and allowing more fugitives to buy guns.

The Senate Intel Committee is warning that the 2018 and 2020 elections will undoubtedly see Russian fuckery, so get your shit straight if you plan on running for office.

State insurance markets are currently on life support after Congress failed to pass its own deadline to stabilize insurance markets. Hang on to this one, you'll need it the next time your racist uncle bemoans the ACA on Facebook.

The House will vote on its budget today, setting the stage for the Trump Taxes and the gutting of Medicare and Medicaid.

Federal workers are getting ANOTHER price hike on their healthcare, but OPM insurance companies swore they'd make things cheaper. So much for public service and good deeds.

Congressional aides have been quietly passing ideas around the Hill on how to punish the NCAA for pissing all over North Carolina's bathroom bill.

It's unlikely the House bill to ban abortions after 20 weeks will pass the Senate, but some Senate Republicans are deathly terrified of Trump's Twitter tirades.

Prince Jared and Princess Ivanka were fined (AGAIN) for ethics violations after failing to submit financial reports, as well as scribbling in some weird numbers for the Ameros they ALLEGEDLY share. PRO TIP: In a pinch, your smartphone can be used as a calendar, spreadsheet AND a calculator!

For $5,000 you too can have a photo with the horse ridin' former Navy SEAL Interior Secretary (and crooked bastard) Ryan Zinke at a Republican fundraiser in the Virgin Islands. Don't worry though, your "donations" only pad his campaign coffers -- the Department of the Interior is footing the bill for his travel expenses.

If you're in the DEEPSTATE, it's your tips that help good journalists uncover crooked politicians, just like a tip to Politico helped to ferret out Tom Price.

Now that we all know he's a hypocrite for making his mistress have an abortion, Rep. Tim Murphy won't seek re-election. Good riddance.

A US district judge wants to know if anybody straight-up lied to the grand jury during the corruption trial for former IL Republican Rep. (and Downton Abbey super fan) Aaron Schock.

REXXON might be denying his REXXIT, but he's not denying calling Trump a "(fucking) moron," and that only highlights how big of a rift sits between Trump and the adults.

According to a new poll by the Economist and YouGov, more than 50 percent of voters think Trump is a "liar," "weak," sucks at his job, and shouldn't seek re-election, but some Congress critters are still cool with President Puss-grab. [Raw Data]

A court in the Southern Mid-West has been sending addicts to an ALLEGED slave labor camp to pull out chicken guts for fast food restaurants. Coincidentally, Christian Alcoholics & Addicts in Recovery (CAAIR) is run by a major processed-chicken manufacturer.

The old rich white people who fund the GOP are so pissed at Mitch McConnell and the rest of the Republican establishment for doing doodly squat, they're holding back all their Ameros ahead of the 2018 elections.

Republicans are deathly terrified that super cranks like Roy Moore are just the beginning of a new insurgency in the Republican party.

Russia and Venezuela might be teaming up to sell oil just to piss off the United States, which sounds terrible until you realize they're both so economically screwed they couldn't get a loan for a shit sandwich.

A Iranian-Canadian who who helped broker the Iranian nuclear deal has been sentenced to five years in prison in Iran on charges of corruption, the latest in a series of measures reportedly intended to pressure the West.

Three Army Green Berets were killed in Niger in an ambush while on a training mission. Al Qaeda in the Islamic Maghreb has claimed responsibility for the attack.

Shit is about to go down in Spain as Catalonia prepares to declare its independence.

WaPo's Petula Dvorak has frank words about the proposed monument to women on the Mall.

Trump has been bitching about the Senate Intel Committee not investigating the "fake news" media that keeps exposing his administration's rampant lying and corruption.

Gretchen Carlson sides with all the women accusing Trump of sexual harassment, and doesn't give a fuck if people hate her for it.

An macheesmo social media star, famous for being douchey trustfunded gun fetishist, is pissed that people are making fun of him for running away from gunfire in Las Vegas like everyone else. Statistically speaking, any rich guy waving guns around a bunch of models in bikinis on Instagram has micropenis.

And here's your late night wrap-up! Stephen Colbert thinks a real president would ignore Moron-gate; James Corden isn't surprised Princess Ivanka and Lil' Donnie bought their way out of fraud charges; Jimmy Kimmelworked through REXXON's "fucking moron" presser; Seth Meyers took A Closer Look at Trump's invisible plane problem; The Daily Show is abso-fucking-lutely sick of fake-fucking-news; Jordan Klepper brought out citizen journalists and mommy blogger, Laura Grey, to 'splain a mans right to choose; and Samantha Bee has a history lesson on Puerto Rico and a grandma fight; and John Oliver had a special 'splainer on the NRA.

We're only here because of readers like you! Send us some Ameros so we can stay ad-free!