Connecticut Unable To Get An Election This Morning 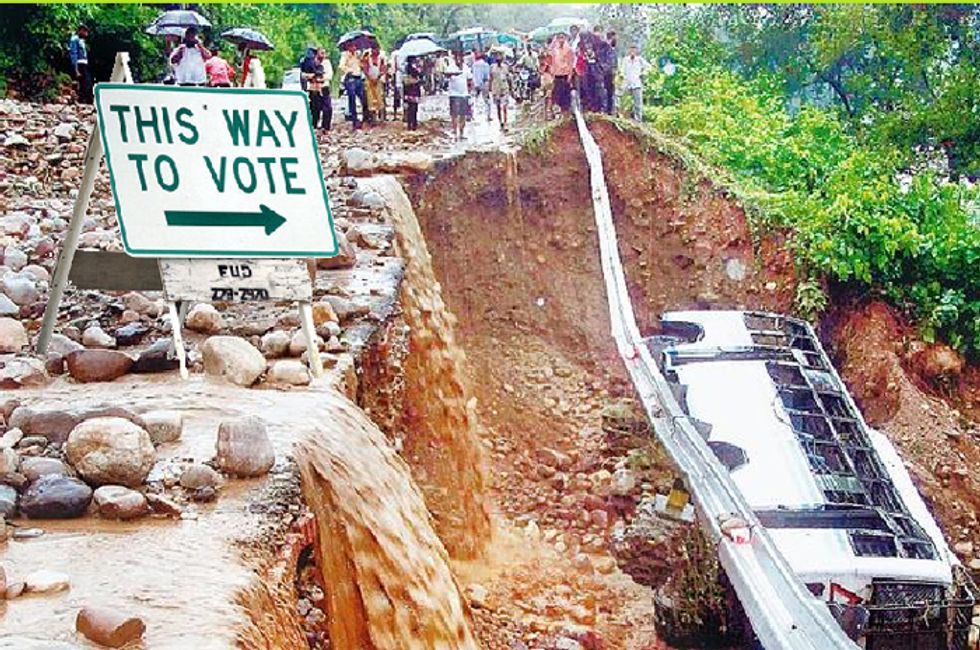 Update: new development; see end of post. Elections never run flawlessly, and it's not unusual -- and no, not an indication of wholesale fraud -- to hear of voting machine glitches and snags. We're quite willing to accept that there's nothing nefarious going on when one or two touch screen machines screw up, though that's also a good argument for good old optical-scan ballots, too. And then there's more unfortunate applications of Murphy's Law on Election Day, like how the Georgia secretary of state's "find your polling place" website crashed this morning. Again, that seems like a glitch, not frauding, although that one looks a lot hinkier in the context of the state maybe losing tens of thousands of new registration applications.

Now we can add to the list of great election planners the city of Hartford, Connecticut, where several polling places were not ready to go when polls were supposed to open at 6 AM They didn't yet have the official voter registration books. In testimony at a hearing today to determine whether polls should remain open late to make up for the late start, witnesses said that as many as 10 or 11 polling places opened late by anywhere from a few minutes to an hour and a half at the latest. Depending on the sites, some allowed people to enter provisional ballots, with their names and addresses to be matched against the lists later, while at others, some voters just gave up and left:

The moderator who was a voting site observer testified the moderator at the site was trying to determine what to do without having the lists and then determined that voting would not be allowed without the lists.

He said 20-30 people left without voting. The moderator kept lists of the people who were turned away. Some did however come back and vote later.

John Gale testified that he was at the polling place shortly after 6 a.m. and said there were angry voters at the United Methodist Church on Farmington Avenue in Hartford who were not able to vote. He observed voters leaving without having voted.

Gov. Dannell Malloy filed a complaint to extend voting hours so that those who might have missed voting early in the morning could come back later. Normally, polls close at 8 PM; the complaint asks for them to stay open an additional hour. Bill Bloss, attorney for Gov. Malloy, said that over half of the city's 24 polling places opened late or were not able to start voting at 6 AM; state law requires registrar books to be at polling places by 8 PM the night before the election.

The hearing was still going on as we wrapped up here; process addicts can catch the action online. Again, no allegations of dirty tricks, just a fine example of the many things that can go wrong in trying to get an election to work.

In a radio interview, President Obama urged Hartford residents to make sure to go back and vote, frustrating though the process might be:

Obviously, the man is trying to steal the election! It's not known whether any New Black Panthers are available to hold doors open for voters in Hartford.

Update: There's been a decision on Gov. Malloy's request for extended voting hours, and it seems pretty darn paltry: Two polling places in Hartford will stay open an extra half hour, to 8:30 p.m., and anyone in line by 8:30 at those locations will be able to vote.

Ballots cast after 8 p.m. must be held on the side in accordance with federal law. The judge is also ordering that the Secretary of the State’s Office investigate why such a well-publicized election had the issues to begin with.

Someone please tell us what "held on the side" amounts to, in terms of whether the votes will actually be counted? The judge appears to be excessively concerned that somebody might try to sneak some Black Panther votes in:

The judge said the reason that voting was only extended for 30 minutes was so that those who could not vote this morning would have enough time to return and vote, but not enough time for additional persons who couldn’t vote earlier to go to the polls.

Sharpest legal mind of the 21st Century, we think. Couldn't he just request post-8 p.m. voters to pinkie swear that they were really there in the morning?