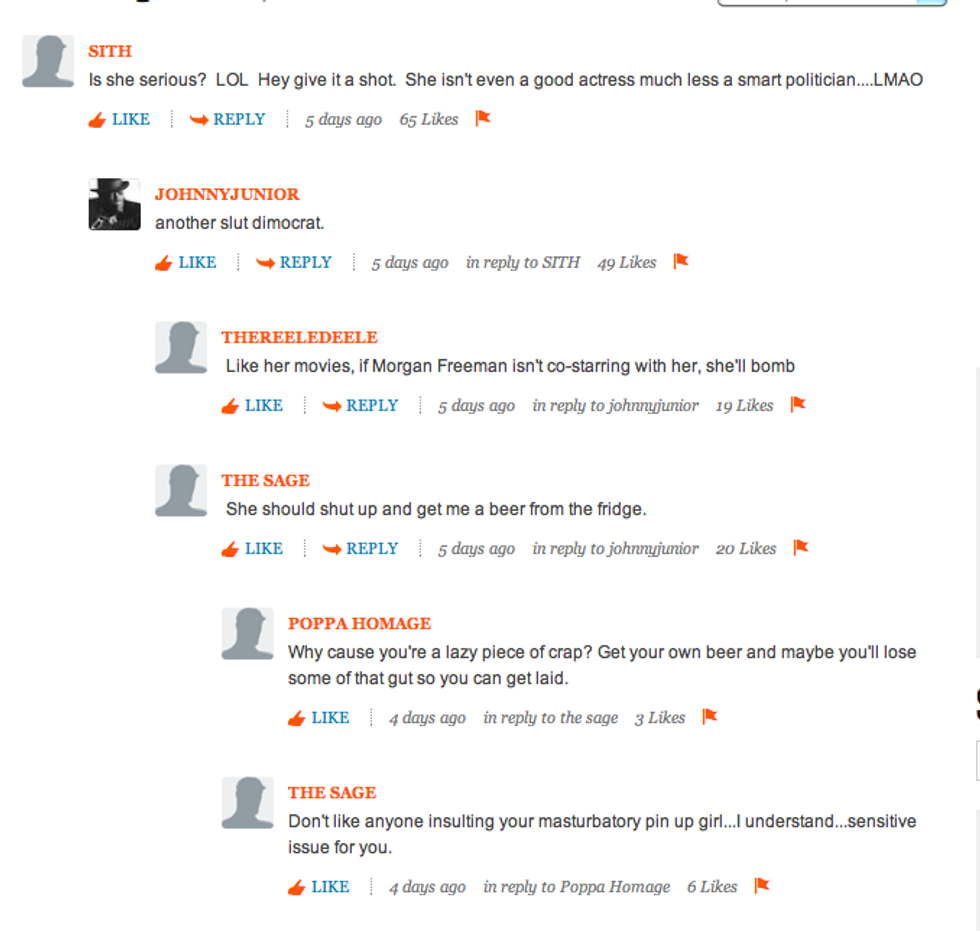 Vagina-American Ashley Judd is rumored to be in the early stages of a establishing a campaign against Senate Minority leader and real life one-dimensional House of Cards stereotype Mitch McConnell. Judd would enter the race with excellent financing, is universally well known, and is a genuinely nice person who devotes her time to fighting sexual violence in the Congo. Given Judd's appeal, Republicans are understandably freaking out at the prospect of her facing a cynically evil power broker whose face also functions as an art school entrance exam. Their response therefore has been focused on the subtle and delicate political message of telling Kentucky voters that SHE'S A WITCH- BURN HER WITH FIRE:

By getting in the race with this sort of baggage, Judd runs the risk of being portrayed as a Todd Akin-esque candidate – meaning voters simply decide she’s unqualified to serve as a senator, because her comments are so outrageous and extreme that people can’t bring themselves to vote for her.

So is the Daily Caller always going to have to explicitly state for its readers why Todd Akin's "Rape Babies are Kewl" stance was a bad thing in terms of his electoral chances?

Anyways, just how much of a Commie is America's Sweetheart?

Here is a sampling of some of Judd’s most stunning comments:

On her decision not to have kids with her husband: “It’s unconscionable to breed, with the number of children who are starving to death in impoverished countries.”

On her comparing mountaintop removal to the Rwandan genocide: “President Clinton has repeatedly said doing nothing during the genocide in Rwanda in 1994 is the single greatest regret of the Presidency. Yet here at home, there is full blown environmental genocide and collapse happening, and we are doing nothing. Naturally, I accept that I set myself up for ridicule for using such strong terms, or perhaps outrage from human victims of slaughter.”

On fathers giving daughters away at weddings: “To this day, a common vestige of male dominion over a woman’s reproductive status is her father ‘giving’ away her away to her husband at their wedding, and the ongoing practice of women giving up their last names in order to assume the name of their husband’s families, into which they have effectively been traded.”

On the coal industry, which employees thousands of Kentuckians: “The era of coal plant is over, unacceptable,” she tweeted in October.

On men: “Throughout history, men have tried to control the means of reproduction, which means trying to control woman. This president [Bush] is a modern day Attila the Hun.”

All right Wonketters, stop fapping before you get fired or the Weasel Zipper assholes have more ammo for making fun of us.

But for reals Ashley Judd sounds awesome now. Kentucky, whose official state plant is an empty box of Sudafed and which only made Spousal Rape illegal in 1990 might elect the woman of Rush Limbaugh's oxycontin overdose nightmares. But just what is the master plan for defeating this uppity slut who speaks about the existence of this magical "patriarchy" that makes life unappealing for our women folk?  If you guessed "reflexively hurl sexist attack lines straight out of Borat in the hope that they stick with people who think NO MA'AM is a real thing," you might be qualified to run a SuperPac in 2014:

If you make her cry, will you feel bad?

That is Bill O'Reilly seriously asking Karl Rove whether he campaigns with a safe word (and also exposing the already well known fact that O'Reilly cannot imagine working near women that are not constantly sobbing in his presence).

Ashley Judd is a famous actress, she’s an attractive woman and presents herself well and — from what I understand — is articulate.

That is from infamous legacy hire and national embarrassment Rand Paul making a judgement on Judd's substantive qualifications when his job prior to becoming a tax subsidized troll was as a back-alley opthamalogist.

But seriously, can Democrats win a Senate seat in a Red State with an actual liberal candidate by ju-jitsuing the incalculable force of wingnut fury that would be provoked by nominating the star of Dolphin Tale? If the comment section from this entirely inoffensive Breitbart story is any indication, 2014 could be the year that Judd joins Elizabeth Warren and Tammy Baldwin to force public school children to become adherents to the goddess movement: