Conservatives Cranking Terror Alert Level Up To OMG! WE'RE ALL GOING TO DIE!!! 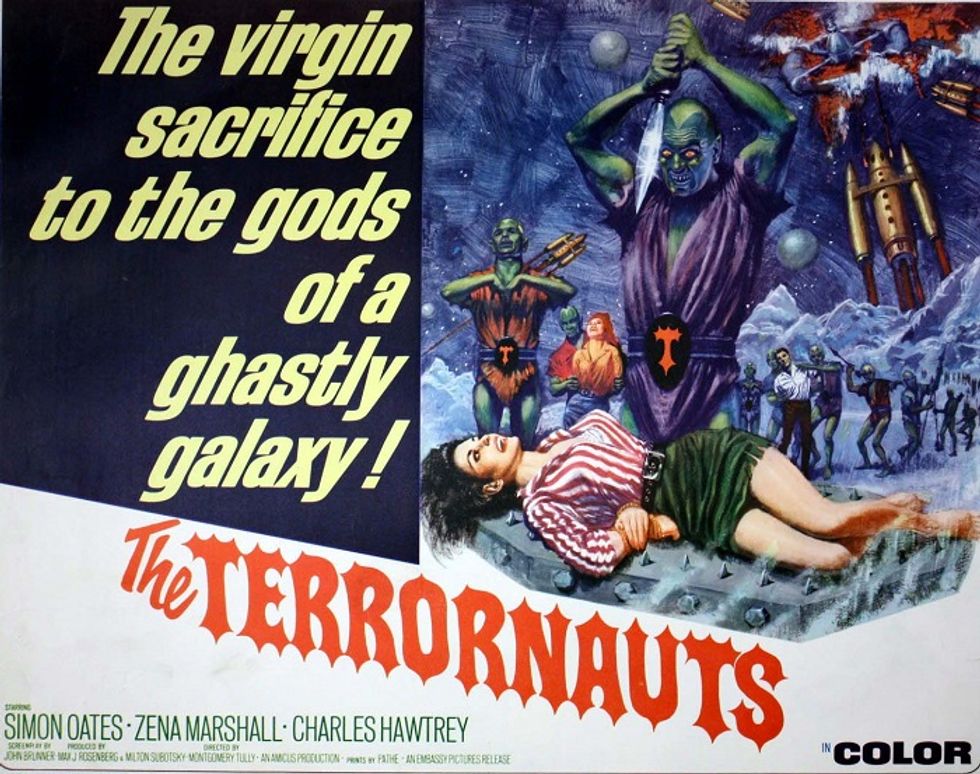 Wonketteers, we do not wish to alarm you about the threat from ISIS, but you should be SHITTING YOUR PANTS IN TERROR BECAUSE THEY ARE COMING FOR YOU AND EVERYTHING YOU HAVE EVERY LOVED. Or at least that seems to be the conservative talking point for the week after the tragic beheading of photojournalist James Foley by militants in Syria. Which is not to play down the insanity of ISIS at all; it is a vicious bunch of assholes. (Even Peggy Noonan was appropriately clear-eyed about the group in today’s column – pants-shitting terror has a way of sobering up even the most wasted of drunks.) But still, some of this might be a bit excessive.

Take Indicted Gov. Rick Perry, for example. Sure, Rick needs to distract everyone from the bad week he has had of being the first Texas governor indicted in a century. Since only a liberal squish would let a felony indictment derail his presidential hopes, Perry went to the Heritage Foundation on Thursday to speak words out of the hole in his face what is made for doing such. The topic was the crisis along our southern border, and the alleged felon currently occupying the Texas governor’s mansion, asked whether he believed that ISIS could take advantage of the situation to sneak operatives into the country, said:

There is a very obvious and great concern that because of the condition of the border from the standpoint of it not being secure and us not knowing who is penetrating across that individuals from ISIS or other terrorist states could be, and I think there is a very real possibility they have already used that.

Not that there is any evidence to support this conclusion, save that Muslim prayer rug someone found a few weeks ago, but it would be irresponsible not to speculate. The governor was joined in his speculation by one Joshua Katz, a former aide to head of the House Homeland Security Committee, Rep. Michael McCaul. Speaking to the Mensa board of directors who host Fox & Friends, Katz said that it is “very, very true” that ISIS could have already crossed the southern border. Which is pretty weaselly phrasing! Yr Wonkette could say that it is very, very true that we could have put on pants today, but that does not mean that we actually did. No, we will not provide photographic evidence.

Then there is Republican National Committeewoman Tamara Scott of Iowa, who has a weekly web TV series, and ain’t technology grand? Used to be people like Tamara would have confined her rantings to the Des Moines public access channel. Now she can speculate fact-free, and anyone with a modem anywhere in the world can hear her. On Thursday, she suggested that the child immigrants crossing the southern border could already be “highly trained as warriors” in the terrorist training camps that we “know” Hezbollah has been setting up in Venezuela to train kids as young as eight or nine “through the MS-13 gangs.” So MS-13 is providing recruits to Hezbollah? Or Hezbollah is secretly training Venezuelan kids to infiltrate MS-13 and then use the gang to cross the border into the U.S. as deep-cover jihadis? Oh look, we’ve gone cross-eyed with confusion.

We would also like to remind you that due to the vagaries of our ridiculous electoral process, the hayseeds in Iowa like Tamara Scott will have an enormous say in choosing the Republican nominee for president in 2016.

Yet none of these holds a candle to Sen. James Inhofe of Oklahoma, who in his capacity as ranking member of the Senate Armed Services Committee knows things that the rest of us do not. Like such as,

ISIS, they are really bad terrorists…They're crazy out there and they're rapidly developing a method of blowing up a major U.S. city and people just can't believe that's happening.

So in a week, ISIS has gone from “beyond anything that we've seen” to probably already being in the country to acquiring The Bomb. Okay then. Is there a greater irony than James Inhofe telling a television station in Oklahoma City that some brown-skinned terrorists are plotting to destroy a major American city? No. There is no greater irony than that.

The best part of Inhofe’s interview is toward the end. Having already said that America has never been in such a dangerous position, that ISIS is working on a way to quickly kill millions of Americans, and that President Obama sucks for never doing anything about groups like ISIS (like, say, bombing the shit out of them), he adds that while some people who have an “association” with ISIS have entered the country, “the majority of them are still over there.”

If anyone needs us, we’ll be out buying plenty of clean underwear.