Conservatives Ready To Impeach Pope While He's In The Neighborhood 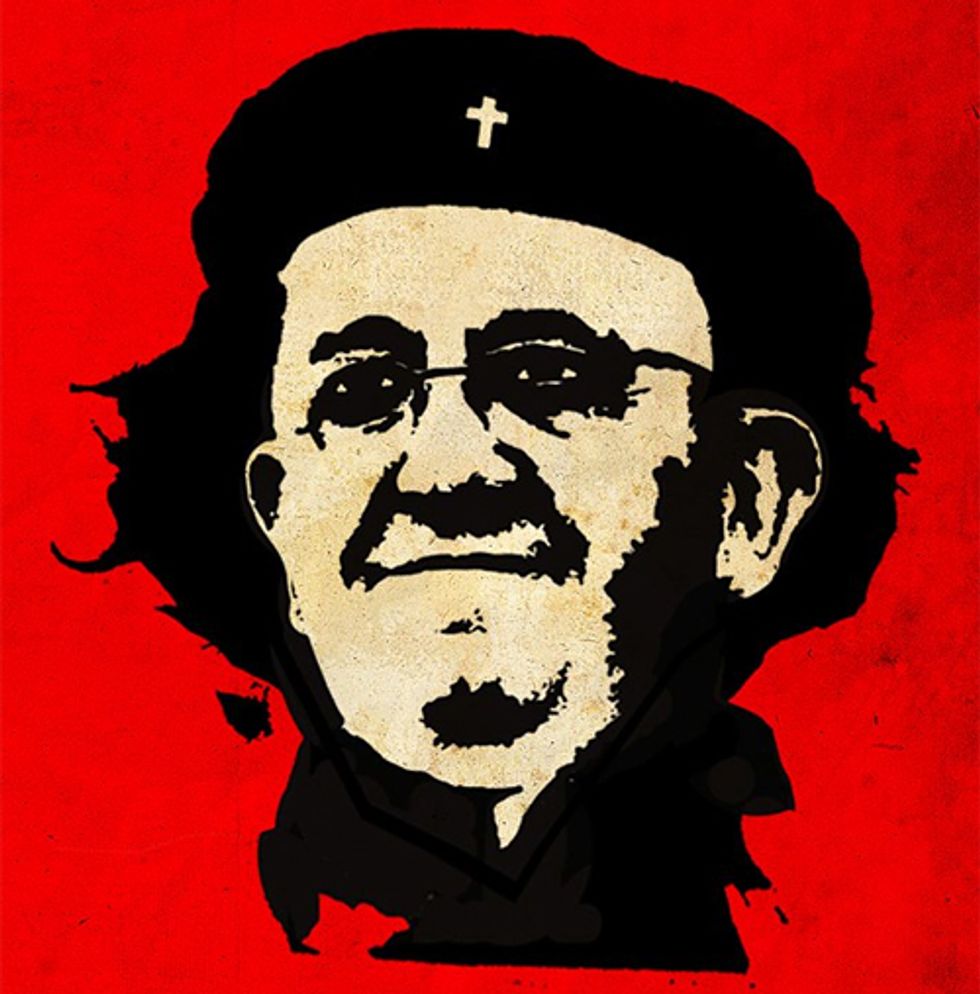 The Pope's a commie? You don't Che!

So New Pope is coming to visit us here in the New World (fine, he's from that other America down south, the one that doesn't count), and there are a lot of right-wingers who are not happy about it, not one bit. But instead of the old-school paranoia about American Catholics having divided loyalties, the concern this time is that this pope isn't a good Republican like he should be. And by golly, there are plenty of right-wing Catholics who wish he'd just shut his yap and go back to Rome so they can get back to accusing the Obama administration of snubbing the Catholic Church and making Jesus cry. Let's see who's got their cassocks in a twist about the Pope Over America Tour.

For starters, there's Fox News idiot Brian "Slightly Less Grating Than Doocy" Kilmeade, who objected on his radio show last Thursday that Francis should have stayed home, telling guest Chris Wallace that he's fed up with this lousy pope:

KILMEADE: Yeah, I'm Catholic and he could stay home. Some of his comments just have no place. He's in the wrong country. But I tell you what --

WALLACE: What? He's in the wrong country? What does that mean?

KILMEADE: He doesn't like capitalism. He blames us and money for what's going on in the Middle East. He says that global warming -- we've got to do more to have global warming -- we've doing more than anybody else. Get on China, show some courage. He's never visited our country before, now he gets around to it and he's critical going in? I have enough, you know -- take on, take on Islam, then talk to me.

Stupid wimpy pope! What have you even done to fight ISIS, huh? Wallace reminded listeners to send their complaints to Brian Kilmeade, not to him, and Kilmeade replied, "Bring it on." Maybe he's willing to fistfight some Nuns on the Bus while he's at it. Wallace said that if "Fox & Friends" doesn't want to interview Francis (like they'll even get him now), he'd still be happy to have the Pope on "Fox News Sunday." Kilmeade simply muttered "tired of the pope," and then presumably went back to writing "Pope more popular than me" in his Big Book Of Grievances.

New Jersey governor and "Republican presidential candidate" Chris Christie was another wet chasuble. He does not care for Francis's role in reopening U.S. diplomatic relations with Cuba, not one bit. Christie told Jake Tapper on CNN's "State of the Union" that if he'd been elected pope, he'd do things a lot differently: "I just think the Pope is wrong," he said, adding, "The fact is that his infallibility is on religious matters, not on political ones." And on Cuba, Francis shouldn't have been such a buttinski. Christie then turned his ire toward President Obama for reopening the American embassy in Cuba, even though the country granted political asylum to '70s radical Joanne Chesimard (aka Assata Shakur), who was convicted of killing a New Jersey state trooper in 1973, escaped from prison in 1979, and fled to Cuba in 1984.

"And the fact is that for me, I just believe that when you have a government that is harboring fugitives ... that this President could extend diplomatic relations with that country ... is outrageous," Christie said.

He added: "I just happen to disagree with the Pope on this one."

And then there's the silliest of the wingnut Catholics to make a fuss about the papal visit: Arizona Republican Congressdope Paul Gosar, who was initially excited that the head of his church was visiting America, but then realized that he can't like the pope because Francis thinks science is real. Gosar the Destroyer is upset that the pope may say something crazy about global warming when he addresses a joint session of Congress Thursday, so the congressman is boycotting the speech to send a message to the pontiff. In a long dumb op-ed published at TownHall.com last week, Gosar complained that the pope was going to waste a bunch of time on the "socialist talking points" about climate change, even though the dumb old climate "has been changing since first created in Genesis." Instead of talking about the really important stuff like killing ISIS and stopping Planned Parenthood, the pope, according to Gosar, is trying to "guilt people into leftist policies."

If the Pope stuck to standard Christian theology, I would be the first in line. If the Pope spoke out with moral authority against violent Islam, I would be there cheering him on. If the Pope urged the Western nations to rescue persecuted Christians in the Middle East, I would back him wholeheartedly. But when the Pope chooses to act and talk like a leftist politician, then he can expect to be treated like one.

Plus, the pope is just a big meanie, because in his encyclical on the environment, "he condemned anyone skeptical of the link between human activity and climate change and adopted the false science being propagated by the Left." Like, say, idiot Republicans, though the pope didn't name any names. But Gosar read between the lines, and doesn't like it one bit. "If the Pope wants to devote his life to fighting climate change then he can do so in his personal time. But to promote questionable science as Catholic dogma is ridiculous."

Lord knows there's nothing about science in the Bible, and that means that God is taking care of everything, so it's pretty nervy of the pope to listen to a bunch of crazy climate scientists -- a mere 97 percent of them -- when doing something about CO2 emissions could prove truly harmful to the profits of many fossil fuel vendors and campaign contributors, many of whom are Catholic.

Hypothetically asked by Yr Wonkette if he understood the import of Rep. Gosar's principled stand in favor of fossil fuels and prosperity, Pope Francis is likely to have said, "Oh. The ugly man from the desert place? You'd think he wouldn't want the planet any hotter. Bless his heart."