Conservatives Wonder: If Obama Hates Paul Ryan's Plan So Much, Why Can't We Feed Park Animals? 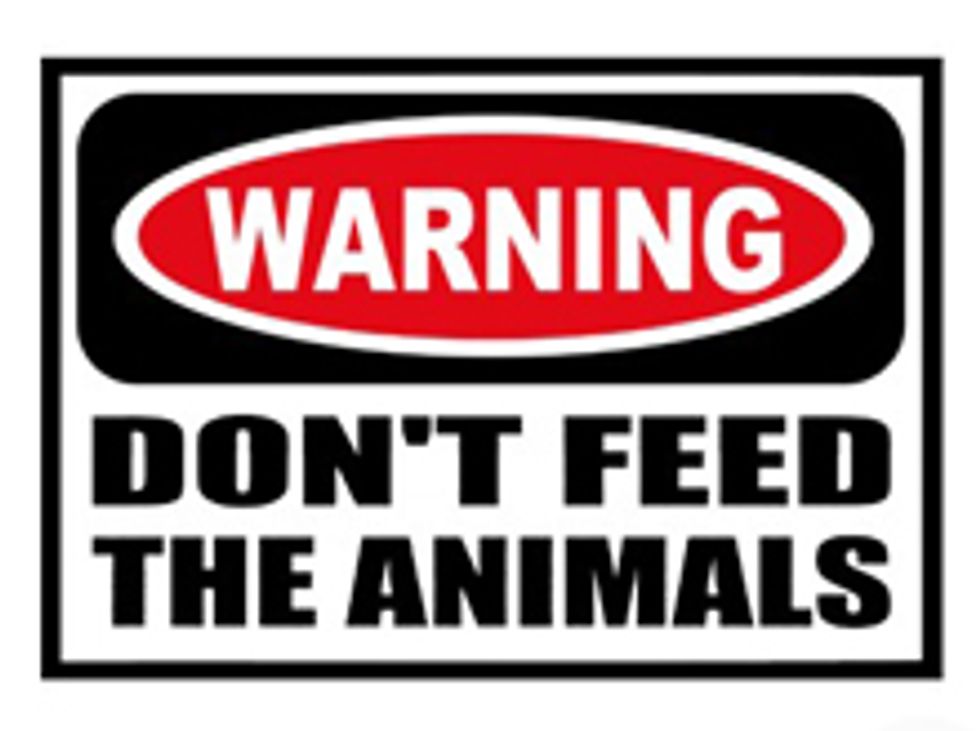 There is a fantastic new, although possibly old, line of argumentation gaining traction among the more blowhardy blow-hards on the rightward end of the political spectrum: park animals: why won't President Obama repeal the laws that forbid people from feeding animals at national parks, now that he's leveraging the term "Social Darwinism" in its most epithetical sense to attack the Paul Ryan budget? Why does the President insist on preserving social insurance programs for one set of animals, Humans, while denying them for another set, the bison of the plains and so forth? Ha ha, gotcha! Hypocrite! Resign! Oy. Expect to hear much more of this typically empathetic analogy comparing humans to animals in the months ahead, as the Class War rages.

National Review's Andy McCarthy, a lively, disturbed fool whose highlights include a condemnation of the media for not adequately describing the poor first pitch President Obama delivered at a baseball game as well as believing the theory that Bill Ayers wrote Obama's first book, lays out this dumb animal thing in one of the funnier posts we'll see for some time:

In light of his froth over this Ryanesque scourge of “Social Darwinism,” does the president favor repealing the laws that prohibit Americans from feeding the animals at the national parks that Obama risibly accuses Representative Ryan of trying to shut down?

You’ve probably seen the signs — they befoul the scenery throughout the Grand Canyon, Acadia, Yellowstone, the Everglades, Yosemite, etc. No food for the fauna. The Darwinists at the U.S. Park Service claim that animals must learn to fend for themselves if they are to survive and thrive. When you feed animals, the bureaucrats coldly explain, they become dependents and no longer function as nature intends. They lose their capacity to make their own way. They fill up on foods that are harmful to their digestive systems. There is a dulling of the instincts that help wildlife avoid danger — they lose the fear of humans and cars, leading many of them to be killed while expecting to find food on the roadside. Some signs are downright mean in admonishing: “A fed animal is a dead animal.”

Mr. President, where is the empathy?

As always, we would like to remind you that Andy McCarthy -- the fellow who just typed out that argument -- is a former federal prosecutor.

And Rush Limbaugh is making the same argument, too! The conservative machine has settled on something; it's moving, folks, and by Friday we'll be hearing Justice Antonin Scalia hissing about park animal regulations in a case about property taxes or something unrelated:

There are at least two ways to debunk this funny animal argument:

It's best to just stick with the non-engaging way.

(Ha, we just googled "national park don't feed the animals" to grab a picture for this post and dozens of obscure wingnut blogs popped up in the results. But go ahead, guys. Go ahead and try to feed those hungry grizzly bears from the palm of your hand, while taunting them. Then you might understand why the rules exist.)