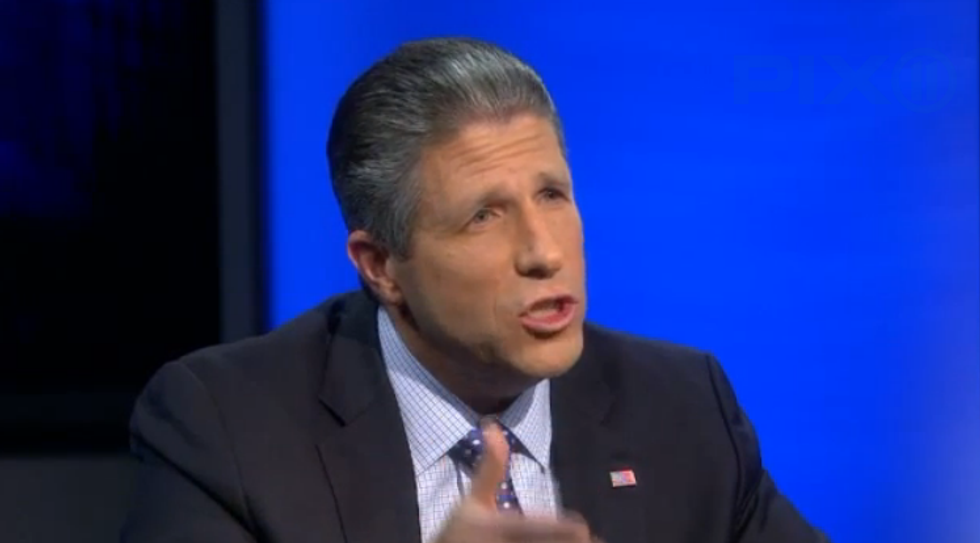 Antun's is a classy joint in Queens that normally specializes in sweet 16 parties and bedazzled weddings. Yesterday, however, this fine establishment played host to a meeting of the NYPD's Patrolmen's Benevolent Association, and things escalated quickly! Worst of all, some rat fink squealed to the New York Daily News, and now the story's breakin' out like the measles.

Tempers flared toward the end of the nearly two-hour session at Antun's in Queens Village when some members began yelling at PBA President Patrick Lynch over his declaration that Mayor de Blasio owes cops an apology.

"This is what my members want: they want more cars, better vests, more manpower,” one cop shouted, according to the sources. “They don't want an apology.” [...]

The meeting then disintegrated into a physical conflict between cops who support Lynch and those who don’t, the sources said.

Despite the flaring tempers and the unquestionably lethal training of the officers present, the Daily News reports that not a single person was killed by a banned chokehold, which has to count as some kind of progress.

Yr Wonket is pleased to hear that union chief and botoxed anger muppet Patrick Lynch has something of a mutiny on his hands, thanks to his dick-measuring contest with Mayor Bill De Blasio. But don't trust these loose-cannon cops claiming that they want better equipment; according to "a police source who's a Lynch supporter," this is all part of the vast left(?)-wing conspiracy against Patrick Lynch.

[A] police source who’s a Lynch supporter said delegates planning to run against the longtime PBA leader are behind the brouhaha.

"They're running a shadow campaign, but they haven't declared they’re running, so they stand up there and yell,” the source said. “It becomes loud and heated because they make it loud and heated. One guy will say something, then three or four guys will get up and scream. It's not a legitimate discourse. It's embarrassing."

Goodness gracious, a hippie fifth column in blue! What clever questions did these agents provocateurs put to poor, noble Patrick Lynch in order to derail this meeting? Wonder no more, dear Wonketeers, for the Daily News has quotes for us, because their rat fink sources are just that good.

Another union member told Lynch: "I don't care about an apology. I want to know what you're going to do to protect us." [...]

“They want to know if there's a plan,” the source said, referring to whether cops should make more arrests. [...]

Cops also wanted to know what happened at a Dec. 30 meeting of five police union heads and the mayor at the new Police Academy.

“They asked Lynch directly, ‘What did you ask the mayor for?’” the source said.

But Lynch wouldn’t discuss what happened at the meeting, the source said.

The New York Daily news wraps up its report with a word from another police union, the Sergeants Benevolent Association, whose president claims that the city's recent decline in arrests and citations is a byproduct of the "hesitancy" of the "rank and file." Apparently, the "rank and file" are unclear about whether or not they can employ a "banned chokehold" and "kill a father of six" in the line of duty, even though a grand jury refused to indict one of their fellow officers for killing a father of six with a banned chokehold.

Lost amid all the pugilism and the cries of Whassamattawityou? is the fact that Patrick Lynch was actually right about something for a change.

“[Lynch] didn't want to talk about it,” the source said. “He said, 'Everything we say gets back to the media.' He was just refusing to answer. He said, ‘It is what it is.’”

It is indeed what it is, rat fink source guy, and isn't that always how it is? It is also like this: Patrick Lynch is having problems with at least a vocal minority of his union, and that vocal minority seems interested in moving on from Lynch's aforementioned dick-measuring contest with the mayor.

If nothing else, that vocal minority seems smart, because at 6'5", Bill De Blasio was never likely to come up short in a dick-measuring contest against a man named Lynch.