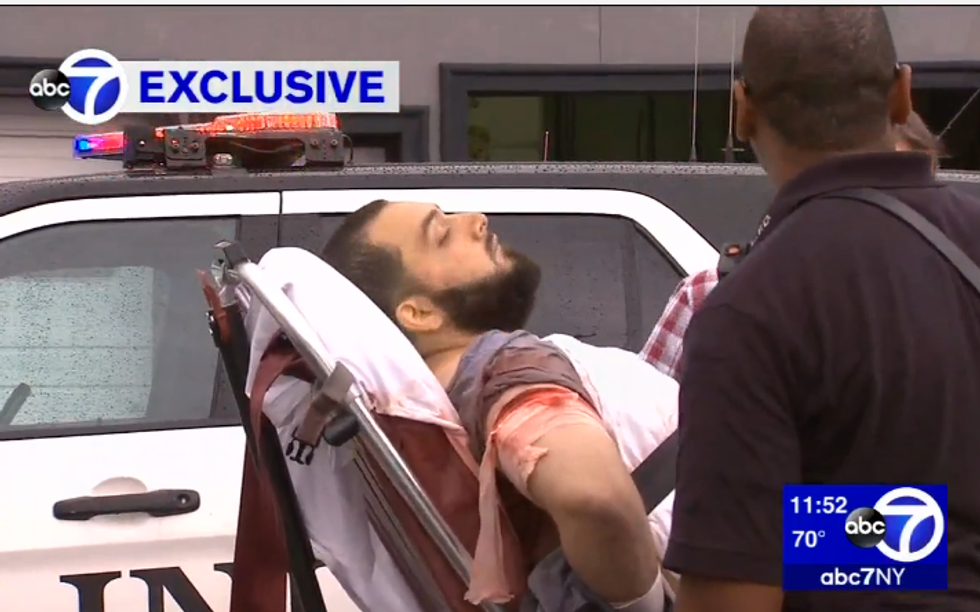 And yet, something stunning happened in Linden, New Jersey, on Monday. Despite being such PC pussies (in Trump's obvious estimation), local police nabbed the suspect in the Chelsea bombing, Ahmad Khan Rahami:

The man believed to be behind weekend bombings in Chelsea, Seaside Park and Elizabeth has been taken into custody following a incident with police in Linden, New Jersey.

"At approximately 10:30 this morning, the owner of one of the establishments in town reported that there was an individual sleeping in his hallway," Linden Mayor Derek Armstead said. "One of our police officers went to investigate, to wake him up, and realized that he was the suspect that has been sought in the other bombings that had occurred prior...He realized it was the suspect, and within moments, the suspect had fired on him. And thank God that he had his vest on. I think that saved his life."

Trump's probably wondering how those PC cops were able to make it out of their safe spaces to go get the bad guy. Oh, and don't give us that shit about the first part of his statement being "our police are amazing." Those are just filler crap words Trump uses while his brain is forming thoughts. It's the "some, I assume, are good people" to Trump's comment about Mexicans being rapists. "Our local cops are amazing, BUT under President Loser Obama, they're simply TOO EMASCULATED to go after these guys," is a good translation of what he is saying. They're all concerned about not appearing racist, which will NEVER be a problem when tremendous racist Donald Trump is president. Yeah, we get you, little man Trump.

But those cops got the bad guy, just like Hillary Clinton was part of the team that got Osama bin Laden, and just like Donald Trump got ... a really good squeeze of his hot daughter's fanny onstage at the Republican convention?

Unless we are being unfair to poor Trump. Maybe he knows those cops did an OK job, but if they weren't such PC pussies right now (THANKS OBAMA), they would have arrested the dude for having an Islamic name and brown skin, LONG before he was the prime suspect in a bombing. MAYBE if President Trump was in charge, the authorities could have deported Rahami back to Afghanistan -- even though he is an American citizen -- along with the millions of peace-loving Muslims and others Trump finds icky, scary and bad, then none of this would have happened.

Or maybe Trump has had a change of heart and is now super proud of our law enforcement again:

And then maybe Trump had another change of heart nine minutes later, and became VERY DISAPPOINTED with our law enforcement:

Maybe it had something to do with his arriving here when he was seven. We clearly need more extreme vetting of second graders.*

How is Donald Trump able to believe such conflicting things at the same time? Well, it's a longshot, but have you ever considered that maybe, like his hands, Trump's IQ is far smaller than he suggests, by which we mean he's really fucking stupid? Worth pondering.

*Update: Looks like we got the date of Rahami's arrival in the USA wrong; joke updated.