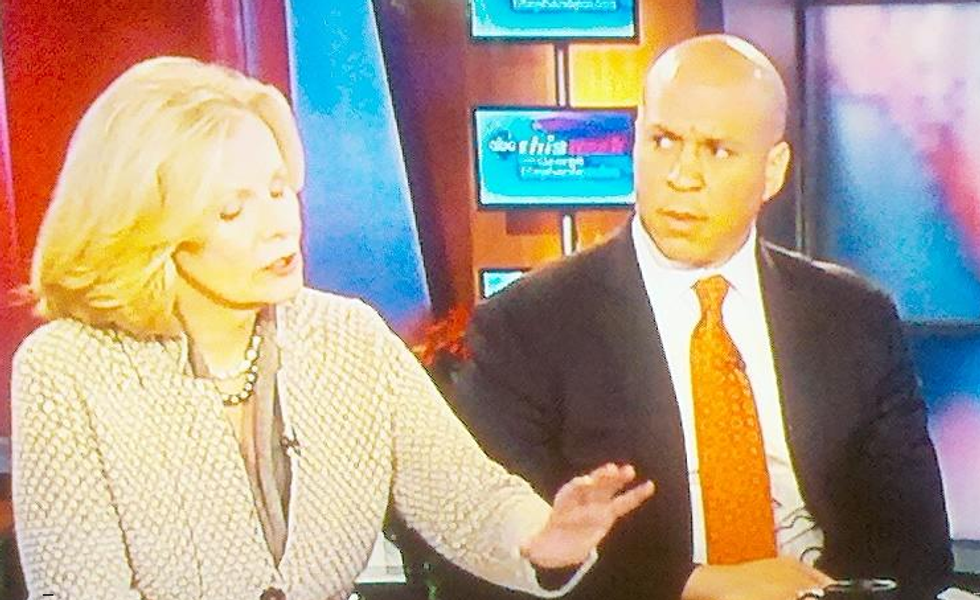 Newark Mayor Cory Booker, the caped-crusading, embattled-cat recovering, amateur fireman,Mr Plow come to life, twitter-master and media darling, won the Democratic primary for New Jersey's open Senate seat yesterday despite a big ol' Hate-On from liberal writers everywhere, including our own erstwhile wonkets. But why all the hate, haters?

Cory Booker is kind of a hot millionaire with miles of pretty teeth and tweets and even more famous lady-type supporters -- Ellen! Oprah! Eva! He has also been accused of GW Bush-style absenteeism from Newark -- but sweet Jesus who wouldn't flee Newark at every opportunity?

The problem seems to be the way he makes it rain Benjamins on Newark, the folks from whom he gets said Benjamins, and his general feelings about how all of that “charity of the benevolent elite” should be handled:

[Booker] believes the economy functions best when wealthy people are allowed to deploy their capital freely, and that progress ensues when they train some of their gains on society's ills.

Aw come on, who doesn't enjoy being trickled down upon? Especially by a hundred million dollars from Facebook? And yes he did say he was "nauseated" by the attacks on Mitt Romney's money and man did that piss off Barry and the mustachioed serious bet-maker David Axelrod (and us!). They said he was like, wrong, and shit, until Cory Booker checked himself into his reeducation camp. But basically what we have here is a bunch of people who are getting on Cory's ass for doing what pretty much everyone has to do these days to even think about getting elected to just about anything. Kissing people with money's asses. And being really good at it.

Now that Mayor Booker has been successful in the primary, he is up against this guy -- self described "disabled" white man Steve Lonegan. He seems nice? Calling Newark all blacky black black black and bitching about being disabled because you are a whitey in a state where almost all the elected officials are also similarly disabled in whiteness seems a bit of a stretch?

It almost feels like Mr. Lonegan knows he is already doomed and is making preemptive tacky cracker-based excuses, all while Mayor Booker swears to take the high road and "match his negative attacks with positive energy. He wants to be a flamethrower. I want to be a bridge-builder." Ugh these pansy-assed no-fighting Dems. Why are they always doing that? Just once it might be fun to see some straight-up fisticuffing.

Cory even gets along and makes cutesy you tube videos with Chris Christie who has not even screamed at him hardly once! Who does this guy think he is?

Well, go ahead Cory Booker, save those dogs and rescue all the women who catch on fire, and wear that Superman cape all the way to the Senate. New Jersey has done a lot fucking worse.