Could Huntsmania Actually Have an Impact in New Hampshire? 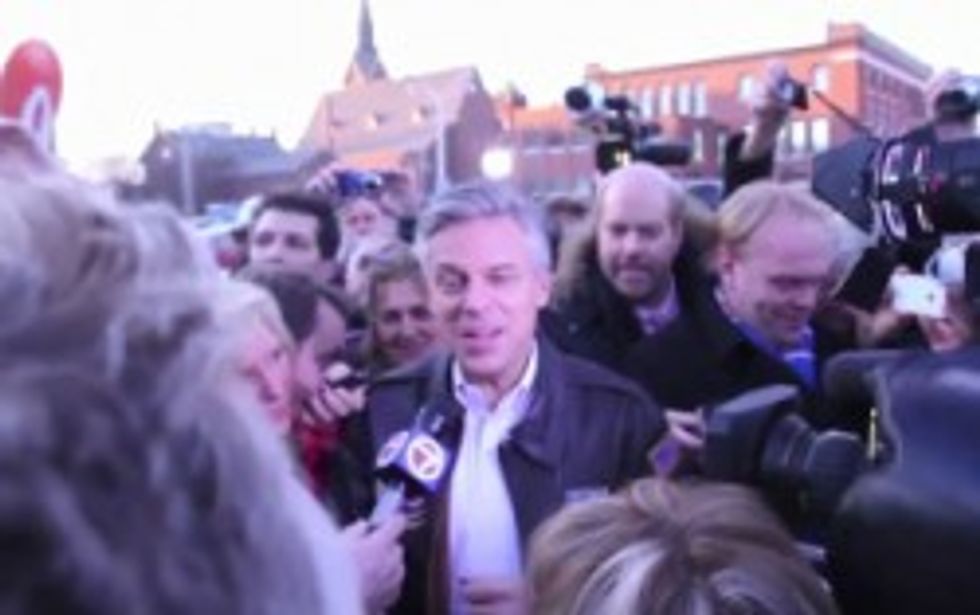 As of two hours ago, the fickle folk of the Granite State have begun voting in the first-in-the-nation primary. Last night, the registered voting population of the petite hamlet of Dixville Notch launched the primary season with their weird tradition of voting 11 hours before everybody else. Nine people showed up. Due to History and the village's uncanny ability to predict the outcome of the Republican nomination race (perfect record since 1960), this was viewed by tweeting humans as important and prescient. Amusingly, President Obama won more votes than everyone else, with three votes. Huntsman and Romney tied at two apiece, which is the only proof we have right now that Huntsmania, the eager flocking of Romney haters (and Obama defectors?) to relative safety under the bomber-jacket-clad wing of former Utah Governor Jon Huntsman, exists. It's a little late, is it not? OR IS IT?

This very, very tardy hype is the result of Huntsman doing pretty much exactly what Rick Santorum did in Iowa. He basically moved to New Hampshire in the fall and proceeded to Go to Work every day, repeating essentially the same pitch speech around three times a day for months. His grand total of events in the state: 170.

Assuming that those events started with a smattering of people and increased to as much as 350 by the final day of campaigning (according to media reports), it's possible that as many as 20,000 people have met Huntsman on the road these past few months (MATH). (To throw some more numbers your way, McCain won 88,571 votes in the 2008 primary.) Granted, none of those people had the faintest idea who this guy was before they showed up to whatever school cafeteria. But there is sufficient evidence that once in the guy's presence, people liked what they saw.

Who are these people, besides being generally non-Romneyites? They appear to be independents, moderates, disaffected Obama supporters. They are people who might consider themselves fiscally conservative but socially moderate or socially liberal. They are people who don't trust Romney, who find Romney to have evil eyes and a fake smile and Huntsman to be a kind of Revenge-of-the-Nerdsy cross-country star dad who helps you with your math homework. They like his diplomatic cred. They like his worldview. They are young people, a demographic of New Hampshire that seems largely divided between Huntsman and Paul. (According to Joe Scarborough, Huntsman is going to have to depend on unhappy Obama supporters -- including the young 'uns -- to take his surge from a statistical uptick to an actual phenomenon.)

In the battle for second place between Paul and Huntsman -- these two are vying for the 41 percent of New Hampshire that considers itself independent -- another advantage Huntsman has is that many of Paul's supporters appear to be DUDES. But don't think Paul's peeps haven't noticed this. They're on it.

Paul has one potential strike against him: the tasteless attack ad that Paul supporters allegedly put out last week (the origins of the video have since come into question, and the Paul camp has denounced it). But we can't underestimate the power of the Paul fanatics to lift their guy into a solid second place. Paul has more money and name recognition than Huntsman. He's been around the block. He's still leading Huntsman in most polls.

But oooooh, does New Hampshire love to surprise us. For what it's worth (fine, nothing, except for the fact that he might be smarter than a lot of humans), Isak the Goat has made his decision: Huntsman in 2012. [Washington Post]