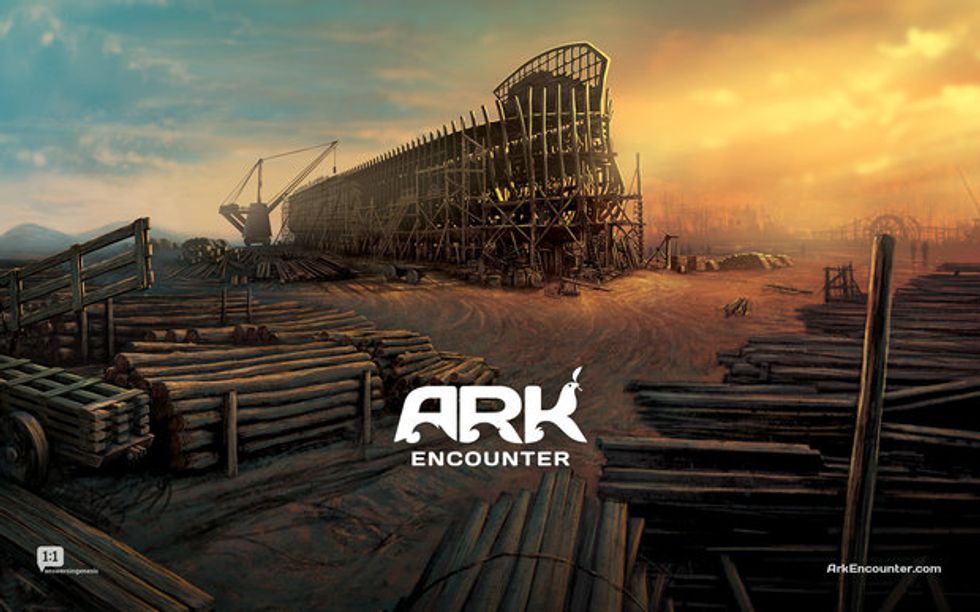 Tragic news for the taxpayers of Kentucky: You will not be forced to foot the bill for creationists to build a really big boat, just like Noah did in the Bible, which actually literally happened, YES IT DID.

For years, Kentucky has been trying to find a way to spend millions of dollars to make Creation Museum impresario Ken Ham's dreams come true by working with his spin-off, Ark Encounter LLC, to build "a full-scale Noah's Ark tourist attraction." Because the one reason Americans haven't put Kentucky at the top of their must-visit list is its lack of a giant-ass boat.

Ham's Answers in Genesis is the same group that built the Creation Museum, filled with "evidence" that science is a liberal hoax, according to Real Scientists like Ken Ham -- who also knows for a scientific fact that if aliens exist, they are definitely going to hell. Factually speaking. With science.

The battle to build Noah's Tinkertoy Ark has been as epic as it was for Noah himself, with some godless heathens pointing out that perhaps taxpayer dollars should not be spent on a for-profit venture to spread the good word about creationism, on account of that pesky First Amendment. And finally, after all these years, it seems the heathens and Satan himself have won:

A proposed Noah's ark theme park in Northern Kentucky has been turned down for around $18 million in state tax incentives amid concerns that it will promote religion and violate the separation of church and state. [...]

"State tourism tax incentives cannot be used to fund religious indoctrination or otherwise be used to advance religion," Tourism Secretary Bob Stewart wrote in the letter. "The use of state incentives in this way violates the separation of church and state provisions of the Constitution and is therefore impermissible."

One of the many problems the group faced was its unapologetic plan to only hire people who believe that yes, the Bible is literally verbatim true (except that argle bargle about bacon-wrapped shrimp, obviously), and that employees of the Noah's Ark theme park would be required to pinky-swear a blood oath that they believed completely in the Church of Ken Ham and would spend their every waking minute forcing other people to believe it too.

The heretics at the Kentucky Tourism Board are under the misguided impression that using taxpayer dollars to explicitly promote religion, and to also discriminate against people who do not subscribe to those beliefs, violates some kind of constitutional something-or-other, whatever, obviously they don't know what they're talking about, because as we all know, the Constitution is based on the Bible anyway. Which is why Ham's group is NOT giving up just yet:

Answers in Genesis, which launched a billboard campaign in Kentucky and New York City this week to counter criticism from "anti-Christian activists," said in a statement that its attorneys are exploring legal options.

And one of the group's attorneys, James Parsons, sent a letter to the cabinet on Monday arguing that the state's demands on hiring policies violate state and federal law.

"If you insist on the newly imposed condition... it will amount to unconstitutional viewpoint discrimination and my client will have no choice but to seek redress in federal court," Parsons wrote.

The letter describes Ark Encounter as an "overtly religious entity" that is "clearly allowed" under state and federal law to use religious criteria in hiring. It also argues that the state's conditions will impose a burden on the freedom of religion without a compelling government interest.

See, if you interpret the Constitution from a biblical perspective, it's quite obvious that the First Amendment actually requires taxpayers to fund the construction of a replica of Noah's Ark and to permit the group to discriminate against non-believers who are going to hell anyway. And the Kentucky Tourism Development Finance Authority originally approved the plan to let the park make millions and millions of dollars that it could keep all to itself, like Jesus said, until some haters came along and pointed out how that was maybe not so legal. Such Judas, many sinful, wow.

We are saying all the prayers that Ken Ham and his faithful flock really do file a lawsuit demanding that the government protect their First Amendment right to build a religious theme park and discriminate against non-believers, because we could use the laughs, amen.