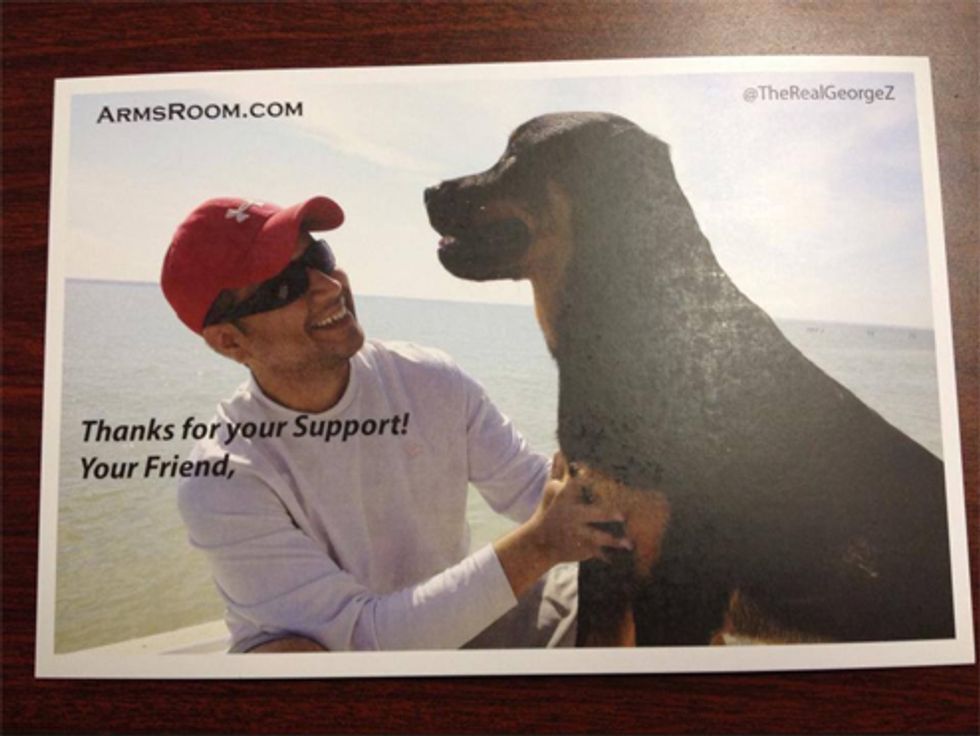 Poor George Zimmerman is a victim once more, this time of a callous public thatfailed to turn out at a gun show to meet him and get his autograph. Don't people understand that if George Zimmerman isn't constantly applauded for his brave ground-standing, the spark of freedom will be extinguished and he might have to get a job?

Zimmerman appeared Saturday at the New Orlando Gun Show, held at the Arms Room gun store in Orlando after a larger venue cancelled the event because of plans for Zimmerman to appear. In an attempt to gin up attendance, the Arms Room posted to Facebook,

Come on out and meet George Z! He's here a few more hours. And no matter what you read, there are no protestors, lunatics or other varieties of ass clowns.

And yet Zimmerman was there all the same, HAW HAW.

Among those who showed up were a couple who identified themselves only as Melissa and Matt, who said they were the only people in line to meet the famed child-killer:

“He seemed nervous and actually a little scared to be there,” said Melissa. “He also appeared emotional, like he was really thankful and touched that people would come out to see him.”

“It was pretty weird to meet him in person -- and wow, he has gained a lot of weight!”

Zimmerman told a reporter from the New York Daily News that he was having a fine time:

Zimmerman, who has complained of receiving a steady stream of death threats and is overwhelmed by debt since he killed unarmed teen [Trayvon] Martin in 2012, said he was enjoying himself.

“Everything’s good. We’re having fun,” said the 30-year-old, who was signing pictures of himself with his dog. “I’m just here to meet supporters.”

And now that he's had his fling with art, and with not quite getting beaten up for money, and with meeting twenty members of his public, what does the future hold for George Zimmerman?

Dare we hope for mockery, ridicule and shame, followed by complete obscurity?