Daily Caller: Never Forget That Black Lady Who Used To Be Blackness Czar Racisted A White General, With Racism 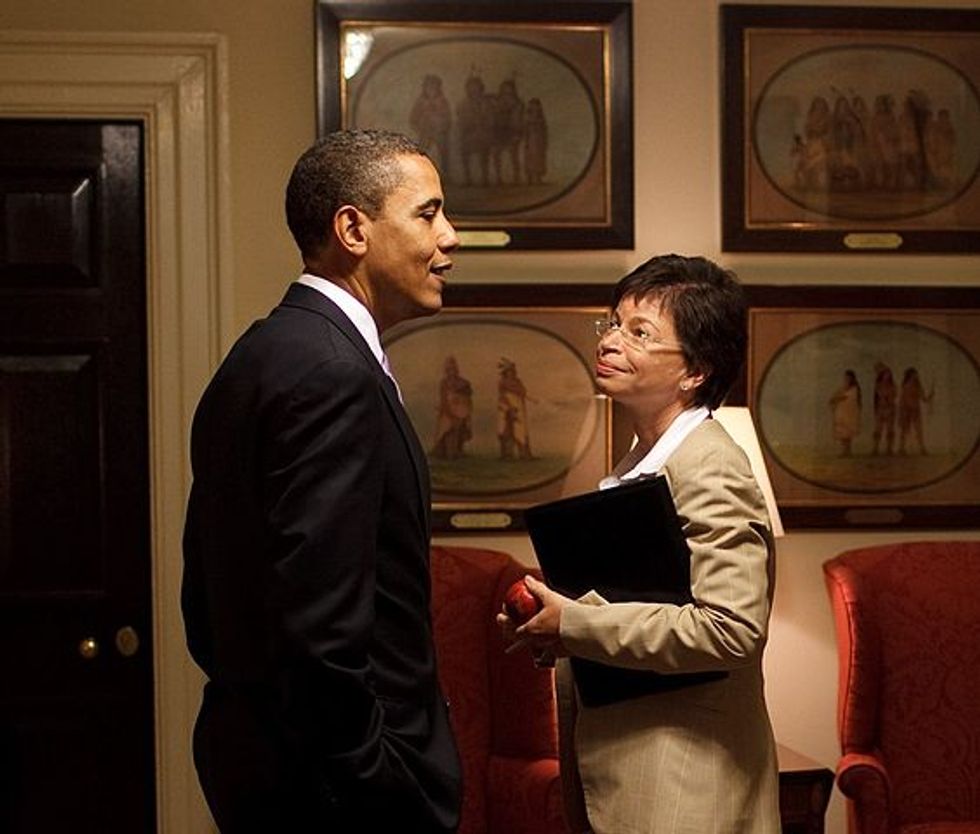 Hot on the heels of the Helter-Skelter-provoking interview with Barack and Michelle Obummer in People magazine, in which they had the uppityness to claim that maybe being black maybe isn’t always a sunshine-and-daisies walk in the park in U.S. America, the always-sincere-and-genuine "journalists" at the Daily Caller have once again raised the tenor of the national conversation on race, by making it all about white people.

In the one day since it was published, the Obamas' interview has incited much conservative rage-derping, from #TCOT diptwittery to Glenn Beck's outrage about the real racism against white Christian conservatives like Glenn Beck. Now the Daily Caller's Senior Editor Jamie Weinstein has dredged up a three-year old article, in which Valerie Jarrett, Senior Advisor to the President and Also Probably Secret Czar of Constant Blackness and BENGHAZIII!!!!1!, mistook a (white!) four-star-general for -- you guessed it! -- a waiter.

As The Daily Caller first reported back in 2011, Obama’s top adviser mistook a four-star general for a waiter during a fancy dinner hosted by the Alfalfa Club. According to a Daily Caller source, as the general walked by Jarrett’s table, she signaled to him that she wanted more libation.

“I’d like another glass of wine,” she reportedly said.

Like a gentleman, the career military man didn’t make a fuss of the matter, according to the source.

(It certainly is nice for this Hero General Man to have the endorsement of the Daily Caller, noted experts in the art of gentlemanly behaviour.)

The takeaway here, of course (beyond the fact that the lives of Daily Caller reporters seem like some kind of inverted Amy Schumer sketch), is that racism happens to everyone, even (maybe even especially!) white people. Therefore racism doesn’t exist and Michael Brown was a thug, the end.

And after all, who does this Senior Advisor to the Commander-in-Chief think she is? Some kind of equal or superior to the Vice-Chief of Staff? She should Know Her Place. (Did I just say that? Yes, I did!) Sources (“an irritated tipster,” which sounds super-legit, you guys) indicate Jarrett also saluted the general with her coffee cup and then triple-Benghazi’d everyone with affirmative action and mean songs, also, too.

Having solved the Case of Racism in America before breakfast, Encyclopedia Weinstein and the Caller Gang went on to spend the afternoon exploring other great mysteries, such as girls and why the other kids don’t like them.

No word whether the Obamas think Jarrett’s slight against the general was spurred by racial animus — or just an honest mistake.

We breathlessly await the president’s televised address to the nation on this pressing matter.