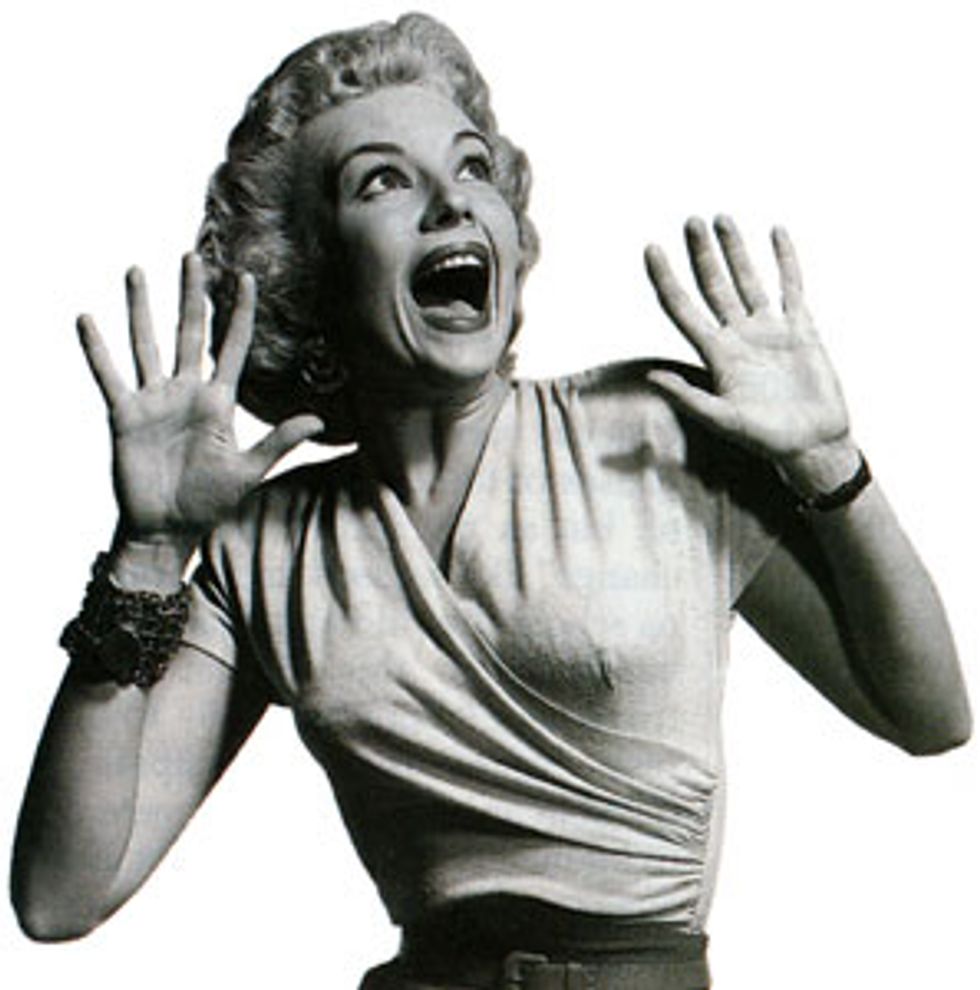 Brace yourselves, guys. The crack team over at the Daily Caller has come out with a new, knuckle-cracking investigation that gets to the root of yet another broad liberal conspiracy: There is a guy on the internet, you see, who has...opinions.

Oh, lord! Say it isn't so! Say it's a fabrication!

The subject of the 1,500-word expose is retired Lt. Col. Mike Russell, who is now a civilian Army employee cited in media reports as an Army neuropsychologist. That's just by day though -- by night ... well, it's pretty awful. Pretty terrible. Steady your toes, because they're about to curl in horror.

By night, Russell posts on a message board.

That's right. The noble DC folks have intelligently designed past harassing Will Ferrell about fake economic statements and into stalking message board commenters:

When retired Lt. Col. Mike Russell isn’t working as the program manger of the Army’s brain testing program, now as a civilian, he’s busy online as the site administer [sic] of KeithOlbermann.org, which describes the former MSNBC and Current TV host as “The Last Reporter Standing.”

A frequent contributor to the site’s Web forum, the main focus of the site, Russell has posted over-the-top political rants against Republicans, criticized the military’s psychiatrists and seemingly tried to recruit fellow online posters for positions on military bases.

Somebody get al-Qaida on the phone, we found one of their masterminds. Let's check out some of these "over-the-top political rants against Republicans":

“All the politicians, including Obama and Romney are BOUGHT, and the world is buried in your bullshit lies streaming form [sic] unlimited multi-national corporate cash. You are probably some paid shill the Koch brother pay to spam our forum with lies. Traitors, the lot of you.”

How DARE he insult staunch Republicans like Mitt Romney and Barack Obama! The nerve. And look at how this delinquent undercover Marxist "used the forum to criticize the Army":

“I was in charge of suicide prevention for the army earlier in the war,” he wrote in a thread titled “Active troop suicides higher than KIA in 2012″ in June 2012, “but resigned when it was clear that they were unwilling to make any actual changes to fix the problem.”

OK, well that is obviously cause to lock him up next to naked Bradley Manning. But there is something more insidious going on here:

Russell went on to suggest that he was willing to bend requirements to hire someone from the online forum — and even suggested he had done so in the past, for a participant who used the username “Philbert.”

PHILBERT. WE HAVE TO FIND PHILBERT.

"Actually the army has a lot of crappy psychiatrists,” Russell wrote in November 2009. “[I]t is a residency program that usually doesn’t get as much applicants as openings, so it is a place you get get a training slot if everyone else turns you down. For psychiatry it is a choice between training a dud and going without.” [...]

“I have 78 people working for me. I can’t find anyone with even a Bachelors [degree] in History in Mississippi,” Russell complained on the forum in June 2010.

MORE sedition! The man is incorrigible. Military mental health services aren't amazing? Blasphemy, against American Jesus! And to say that maybe the state that sends black students to prison for school infractions might have some educational problems is basically racist, right? It's not like the state's neighbors are teaching students that the Loch Ness Monster is real and disproves evolution or anything. Everything is always fine in the South.

But what's this? Comment from the guy the article is about? How could he explain this OUTRAGE?

“I hope you are looking forward to your travels to San Antonio, Texas, where your defamation lawsuit will be held, because whatever my status in 2010. I retired from the military in November 2010 and sold the forum you are complaining about to Cheryl Roberts in 2011, so am a Private Person in 2012.”

Wait -- so they guy described in the lede as "the long-time administrator of a Keith Olbermann fan site" is revealed, in the 33rd paragraph, to not be the administrator of a Keith Olbermann fan site? Daily Caller people, I am starting to suspect you may be, on occasion... obtuse. You get one last chance to save this article before we do one of those mean "In review" things.

Asked whether it is appropriate for an Army doctor who presumably deals with patients of all political stripes to engage in hostile partisan rhetoric, the Army spokesman said, “We cannot comment on this allegation.”

GAH OK that's enough. There might have been a way out, but the article instead went to "Maybe liberal doctors give Republicans cancer," so here's the "In review."

In review: Officer retires from military, becomes contractor, writes on message boards that he thinks corporate money is corrupting politics, then mentions he needs smart people to work for him. This is very shady, because maybe he's just hiring his friends, except he was so disillusioned by the military's ability to keep soldiers from killing themselves that he stopped being in the military, so it's probably not that.

In any case, we should be incensed because the guy likes Keith Olbermann. [Daily Caller]