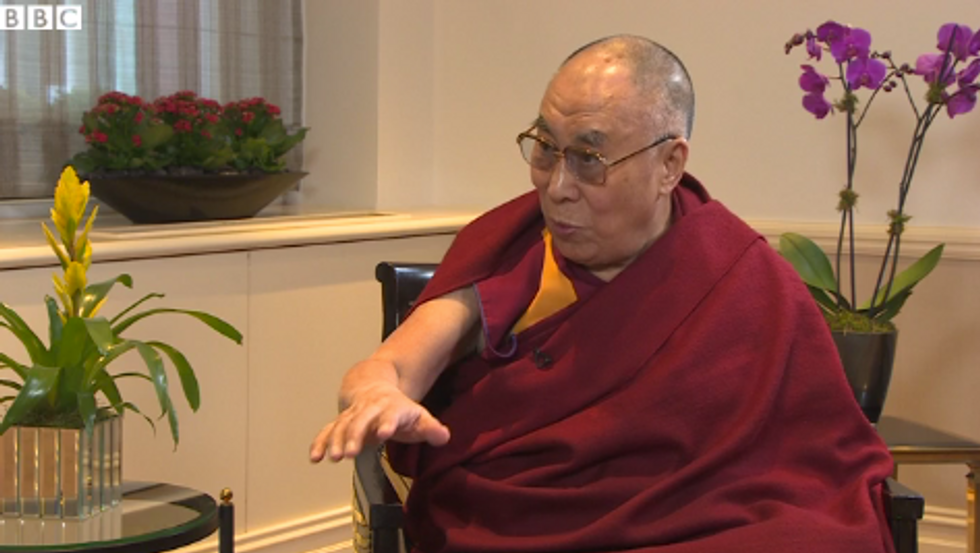 And he likes them about thiiiiiiiis high

Like we have said before, and no doubt will say again, MEN ARE THE WORST. Even the Dalai Lama -- the Dalai Lama, people! -- has a lady problem. What, is he thinking of running for U.S. president as a Republican too? During a recent interview with the BBC, His Holiness declared that while it is certainly possible for a Lady Lama to succeed him, she has to be hot.

Today in a more troubled world, I think females should take more important roles, and ... if a female Dalai Lama comes, their face must be, should be very attractive.

BBC reporter Clive Myrie was like, "Surely, you jest!" But nah, bro, Lama ain't jesting, and don't call him Shirley.

MYRIE: So you can only have a female Dalai Lama if they’re attractive? Is that what you’re saying? You can't have --

LAMA: I mean if female Dalai Lama come, then that female must be very attractive, otherwise not much use.

LOL, Lama, he laughing so hard, maybe he is joking about how he's not joking. Or maybe he's been watching too much Donald Trump, and he's like, "No one is gonna elect that face to the job of Dalai Lama!" Or maybe he's just a typical man after all.

Heck, this isn't even the first time he's been like "Ha ha, PATRIARCHY, BITCHEZ." In May, he was even more explicit about how only pretty girl-faces need apply. They should also be blonde and DTF:

She should be “mischievous” and “her face must be very attractive [or] nobody [will] pay much attention,” the monk said in an interview on Friday, according to The Sunday Times of London.

Uh, OK? We sort of see His Holiness's point, about how even with monks, girls gotta be like, "My eyes are up HERE, bro." But damn, shouldn't he be calling for his robed brethren to transcend beyond western-style Hot Or Not superficiality? Or maybe not, because no matter how many centuries he has incarnated into this particular position, he is, after all, just a man. Maybe -- ooh, Deep Thought Hot Take -- all men, even if they are world-famous religious leaders who are supposed to be better than you, and you, and definitely you two over there, are still, alas, just men. And, like all men (#YesAllMen), prone to thinking with their little brains, if you know what we mean. (WE MEAN DICKS.)

Right now, New Pope is pope-mobiling around America, having just offered, for this limited time only, a get-out-of-hell-free card to sinful whores who have abortions, so long as they beg and plead real good for forgiveness. Maybe Frank is also just a man and likes to see the ladies on their knees.

Maybe it's like how we said before, and men are the problem, and everything is their fault:

They are charged less for dry-cleaning. They do most of the murdering, raping, domestic violencing and other criming. They spread their legs all over the subway like it’s theirs. They suck up all of the oxygen, with their constant mansplaining of every goddamned thing. Also, they have only just barely started contributing to housework, a little bit, and they already want all the trophies and prizes and parades, Jesus joint-smokin’ Christ.

And that is why we should ban them from all the things and give ladies a chance to be the worst for a while. Even the ones whose faces aren't pretty enough for His Holiness.